Worldwide the top 1% control over half all wealth

Worldwide the top 1% control over half all wealth

Internationally the discussion about wealth and inequality continues unabated.

Even mainstream institutions are joining the debate to “warn” their masters that unrestricted growth in inequality could prove dangerous - economically and politically. These include the OECD, the United Nations, the International Monetary Fund and the World Economic Forum. This is rather ironic today given that the policies that have accelerated the rise in income inequality and wealth redistribution upwards include all these same institutions.

An insurgent revolt in US politics on both the left and the right has inequality at its core. The maverick candidacy of Bernie Sanders for the Democratic Party presidential nomination in the US has even put a discussion of socialism on the agenda.

The extent of the wealth inequality globally is much worse than previously estimated according to recent reports. 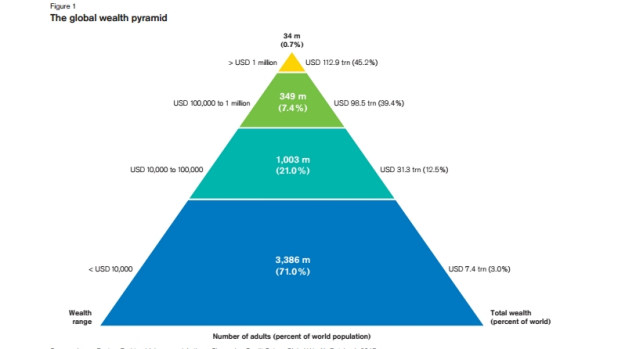 The Credit Suisse annual growth survey notes that since the global financial crisis inequality has grown and the top one percent globally now own half of all household wealth in the world. The wealth increase is also more unequal than before. Since 2008, “middle-class wealth has grown at a slower pace than wealth at the top end. This has reversed the pre-crisis trend, which saw the share of middle-class wealth remaining fairly stable over time."

The number of millionaires around the world increased by 146 per cent since 2000, and there were now more than 120,000 ultra-high net worth individuals - each worth more than $US50 million (NZ$73m).

The situation in the US is an even more extreme example. A report on the Forbes 400 wealthiest US citizens by the Institute for Policy Studies in the US calculates that the top 20 wealthiest people now own more wealth than the bottom 50% of US residents. For the top 20 that averages about $36 billion each.

A column in Al Jazeera by Pulitzer prize winning journalist David Clay Johnston believes the report seriously underestimates the actual wealth concentration because the Forbes list is based on publicly available information.

In the UK the story is the same. This week The independent reports that “The richest 1 per cent of the population have as much wealth as the poorest 57 per cent combined, according to Office for National Statistics figures.”

What can be done about this inequality is taken up by Nobel laureate Joseph Stiglitz. Rewriting the Rules of the American Economy: An Agenda for Growth and Shared Prosperity can be downloaded. The first half of the book is devoted to how the US got itself into the situation it has. Much of it he points out was a consequence of deliberate policy that has continued today. He notes that 91% of all income growth between 2009 and 2012 was enjoyed by the wealthiest one percent of Americans.

In the second half of the book he has a detailed prescription of the type of policies that are needed to turn the situation around. Sitiglitz wants to save capitalism from itself. He believes the system can be made to work.

But, given the reality of US politics that he who pays the piper calls the tune, Stiglitz must suspect this is a naive hope.

Just 158 families, along with companies they own or control, provided nearly half the contributions to the presidential candidates in both parties, though giving was heavily skewed to Republicans.

The result is policies that take from the many and redistribute to the already rich few through stealth techniques that rarely make the news but can be found in the public record. Among these policies are a failure to enforce the laws of business competition, severe restrictions on unions and subsidies galore for big companies.

Five years ago, the 400 households reporting the largest incomes on their tax returns captured an astonishing 6 percent of all the increased income in America, as I revealed a year ago. Such massive inequality reflects not market economics but political influence that tilts the economic playing field.

And because of their political influence, those at the very top get tax favors, especially the deferral of taxes into the distant future, which transforms the burden of taxes into a bonanza of increased profits.

If you wonder why Washington doesn’t seem to fix problems that affect most Americans, this is the answer: Politicians take care of the hands that feed them, the donor class.

Something radical needs to be done to effect any real change. New movements need to be built that can turn the victims of the system into their own agents of liberation. That process is beginning with the Fight for $15 and Black Lives Matter and is reflected, in part, in the anti-corporate language of both Sanders and Trump.

For humanity's sake let us hope there is a progressive not a reactionary solution found.