This is the second of a series of articles based on a speech to a conference sponsored by the Child Poverty Action Group looking at work and welfare in the 21st century. (Part 1)

Since the early 1990s, benefit levels have been slashed in real terms.
The governments of the day were motivated to save money to give in tax cuts to their rich mates.
But they also made it clear they wanted to lower real wages.
That is why they destroyed collective bargaining and union representation for most workers.
But to cut real wages the employer thinks he needs the gap to grow between wages and welfare payments. You have to make living on a benefit as miserable as possible. 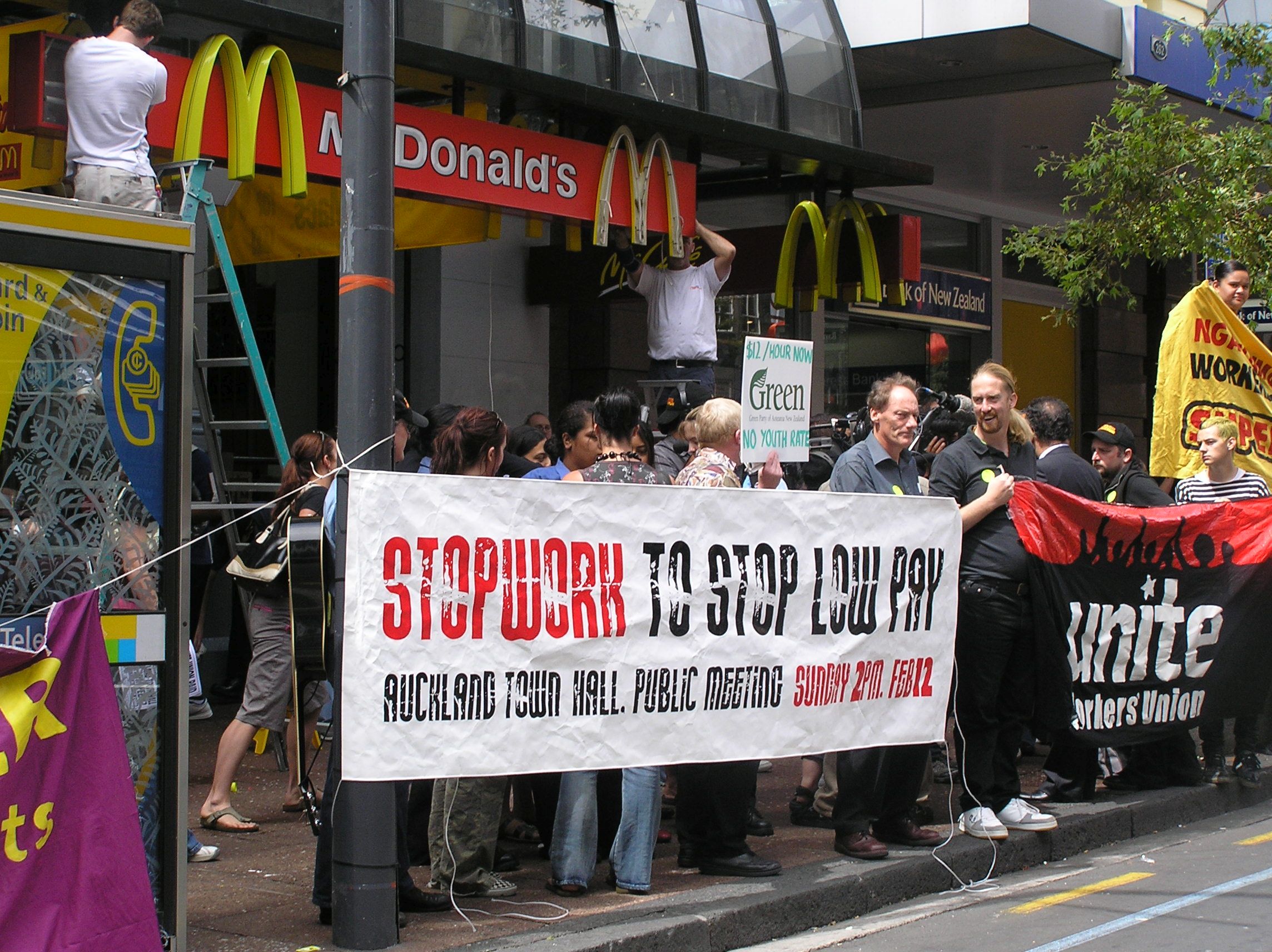 In 1991, National savagely cut the rates of all benefits, including the invalids and sickness benefits. The harshest cuts were for the unemployed.
The unemployment benefit was cut by 25% for young people, 20% for young sickness beneficiaries, and 17% for solo parents. They abolished the family benefit and made many workers ineligible for the unemployment benefit with a stand down period of up to a six months. The 1992 benefit cuts were worth approximately $1.3 billion – about the same size of each of the tax cuts handed out in 1996 and 1998. Unemployment benefits were stopped for 16 and 17 year-olds and the youth rate for 18 & 19 year-olds extended to the age of 25.
Benefits as a percentage of the average wage fell significantly after 1985.The single person unemployment benefit dropped from 42 to 30% of the average wage by 1996. National Super for a married couple went from 85% to 72%. A domestic purposes benefit for a parent with one child went from 80% to 53%. The benefit for an unemployed couple with two children went from 95 to 69% of the average wage. The real value of National Superannuation was cut by 40% when combined with the extension of the age of eligibility from 60 to 65 years between 1992 and 2001 (See Table 1). 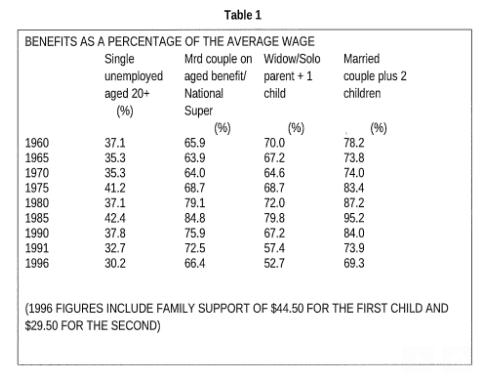 Levels of unemployment were much lower in the period from the 1960s to the 1980s when benefits were higher I relation to average wages. When jobs were available people chose to work.
Prior to the cuts in 1991 around 25% of children in beneficiary families were identified as poor in the Household Economic Survey. That rose to 75% post cuts and hasn’t changed much since.
To justify these cuts (and the refusal of future Labour-led governments to reverse them) a whole ideology around deserving and undeserving poor has been developed. Anyone who is not working is a bludger.
Assistance is targeted to those deserving people in work through Working for families.
Universal entitlements like the family benefit were eliminated so assistance could be targeted to the deserving more accurately.
The system became one where seeking assistance became more and more difficult, humiliating, and vindictive.
The economic recession that was partly induced by the budget welfare cuts saw unemployment hit 10-12% on average. But for those of Maori or Pacifica descent the recession was a depression with unemployment reaching 25% and whole communities shattered.
Prior to this recession, Maori and Pacifica had higher labour force participation rates than did Pakeha.
That was before the infection of these communities by a mass virus of laziness that saw tens of thousands of them quit work over just a few years.
Full-time male employment fell by 120,000 over four years from 1987-91. Of course, this impacted much more on Maori and Pacifica.
Working class communities and families were torn inside out and upside down.
To compensate for the loss of real income families worked more hours. Two parent families with both working full time doubled from 20% in the 1980s to 42% of all families. Another 28% of families today had a parent working part time.
A report by Simon Collins in the New Zealand Herald 25/11/06 found that average family income in 2001 in constant dollars was the same as in 1981 despite the fact that the proportion of women working went from 47% to 61% and the percentage of families working 50+ hours a week went from half to two-thirds.
In New Zealand, average household debt went from 60% of GDP 15 years ago to 150% today. This is the second most indebted in the OECD. Much of this went into housing with the banks fuelling a housing price bubble as prices doubled since 2000 – the same as they did in the UK and Australia.
We were told not to worry. We were encouraged to use our houses as an ATM machine. Average household expenditure exceeded average income on average about 6% for those 15 years but increased to 15% in the mid-2000s. In the 3 decades before 1980 households saved on average about 10% of their income.
The bosses agenda is simple. Shift all costs onto workers (or the environment, or the government) and maximise their profits. That is the nature of capitalism.
Do you like this post?
Tweet