There is a growing recognition that capitalism is at least a part of the problem we face in this society.

First, we had Winston Peters comment when he announced he was forming a government with the Labour Party. He said:

“Far too many New Zealanders have come to view today’s capitalism, not as their friend, but as their foe. And they are not all wrong. That is why we believe that capitalism must regain its responsible – its human face.”

Then the new Prime Minister and Labour Party leader Jacinda Adern was asked directly if capitalism had failed low-income Kiwis she was unequivocal that it had.

“If you have hundreds of thousands of children living in homes without enough to survive, that’s a blatant failure. What else could you describe it as?” she said. 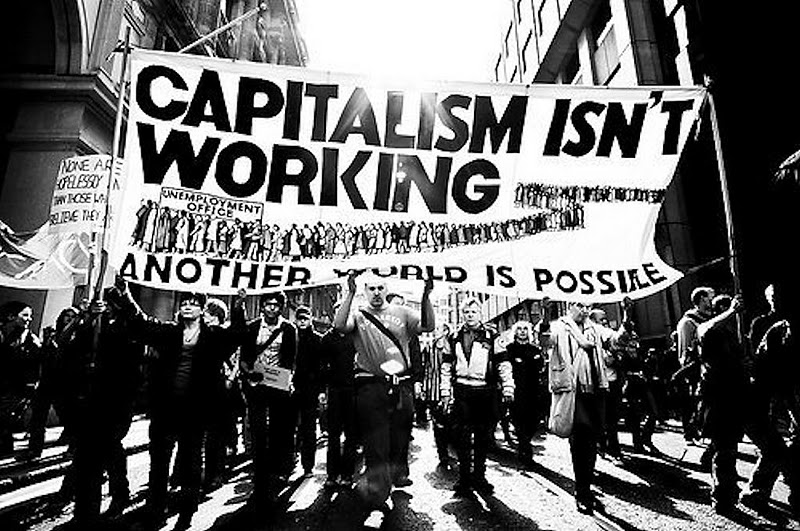 Her alternative was to “acknowledge where the market has failed and where intervention is required.”

Given the dominant views being propagated in the media by government leaders, political and economic commentators, and big business-owned media has been the opposite of that view for decades, this has been a resounding failure for the orthodox view.

The truth is that inequality has been growing, along with widespread poverty in the most advanced capitalist nations on earth in Europe, North America, Japan and Australasia.

Joeseph Stadler, the lead author of the report is worried there will be a backlash against this concentration of wealth as has occurred in the past. He told the UK Guardian that:

“Wealth concentration is as high as in 1905; this is something billionaires are concerned about. The problem is the power of interest on interest—that makes big money bigger—and the question is to what extent is that sustainable, and at what point will society intervene and strike back?”

The international aid agency Oxfam has found that: “The global inequality crisis is reaching new extremes. The richest 1% now have more wealth than the rest of the world combined. Power and privilege is being used to skew the economic system to increase the gap between the richest and the rest. A global network of tax havens further enables the richest individuals to hide $7.6 trillion. The fight against poverty will not be won until the inequality crisis is tackled.”

Millions of working people have felt the harsh truth of that reality, but it has not often found a political voice.

The system’s defenders have always argued that inequality and poverty that has been central to the reality of the capitalist system was some sort of mistake caused by interfering with the market, rather than caused by its natural laws. Just a few months ago, UK prime Minister Theresa May was arguing that “A free market economy, operating under the right rules and regulations, is the greatest agent of collective human progress ever created” She added that this system was “the only sustainable way of increasing the living standards of everyone in the country.”

Those comments are religious dogma not science. Millions of citizens of the UK used the election that was held there recently to repudiate her lies by voting for an opposition Labour Party led by someone who speaks openly for a socialist alternative.

Even big bosses in the UK are getting worried at the failure of their own system. The Financial Times in the UK is a leading mouthpiece of big business. Talking among themselves they let slip the worries they have. On October 22 they printed the views of a number of business leaders also concerned at the failures of capitalism.

Baroness Shriti Vadera of Santander UK contradicts the assertion of Theresa May and says that “The underlying promise of western capitalist economies — that a rising tide lifts all boats — has been broken.” She then adds that “A better model” is now needed.

The problem with all these commentators from Winston Peters to Baroness Vadera is that capitalism has no “lost its way” or its “human face”.

Capitalism is actually showing us the inevitable outcome of its nature and its true face.

Capitalism has been the dominant economic system on the planet for at least 150 years. It has produced extraordinary economic growth. For many decades one generation was generally better off than the next. But that has ceased to be true other than for China and possibly India today (for reasons we will discuss at another time).

Today working people in the most advanced capitalist countries are going backwards from one generation to the next.

The capitalist economic system is also based on endless growth. On average, the system has grown about three percent a year for 200 years. But today, that perpetual growth machine is suffocating the planet and as it does so it will destroy humanity’s ability to coexist with the planet for their own survival.

This is a life and death struggle. Capitalism exists as a competitive system. It produces winners and losers. Capital is concentrated and centralised. That is the source of monopolisation and the domination of the 1%.

This system cannot be regulated or controlled. It needs to be overthrown and a new system of production and distribution that is not based on the profit motive brought in to replace it.

We have a name for that system. It is called socialism. And this system, at least in theory, is becoming more and more popular around the world. Even in the United States where being a socialist is almost unlawful, some four out of ten people say they prefer socialism to capitalism.

Capitalists have controlled most businesses that exist in the world and they operate according to its laws. Capitalists own most of the newspapers which churn our daily propaganda defending the eternal nature of the system. They have entire professions devoted to furthering their needs and interests.

Yet two out of three people in New Zealand thinks this system has failed. That is extraordinary.

We need to transform that “anti-capitalist” sentiment into a pro-socialist one. This can be done by developing a series of demands that seem reasonable and sensible but which lead to the transformation of society rather than trying to make the system work. The system does work. The problem for the system – capitalism – is that we don’t like it. We need a new system.