Unite Union scored a win for workers at Restaurant Brands on April 14 which was an international day of action for fast food workers.

We discovered just a few weeks ago that Restaurant Brands (owner of the KFC, Pizza Hut, Starbucks and Carl’s Jr brands in NZ) planned to begin franchising some of its Carl’s Jr stores. We received very little notice of the planned move and discovered the new “owner” planned to make a whole range of cuts to the terms and conditions in the collective agreement.

Our members in the Gisborne Carl’s Jr were appalled at the terms being offered – which included a 90-day right to fire clause as well as wage cuts and elimination of overtime rates. No one wanted to work for the new owner.

Unite was also concerned that in their communications with the union the company was continuing to deny that it had anything wrong with its payroll system and how annual leave was being calculated. They had also ignored our requests for an independent auditor to be brought in to check their systems.

We first wrote to the company almost a year ago on the issue. Their responses, like all the other major companies in the industry when we first raised the problem was to just pretend there was nothing wrong. However, when the NZ Police and MBIE were identified as having major problems on exactly the same matters, Burger King and McDonald’s informed the union they were bringing in independent auditors as we had requested. Restaurant Brands, however, appeared to remain in denial. 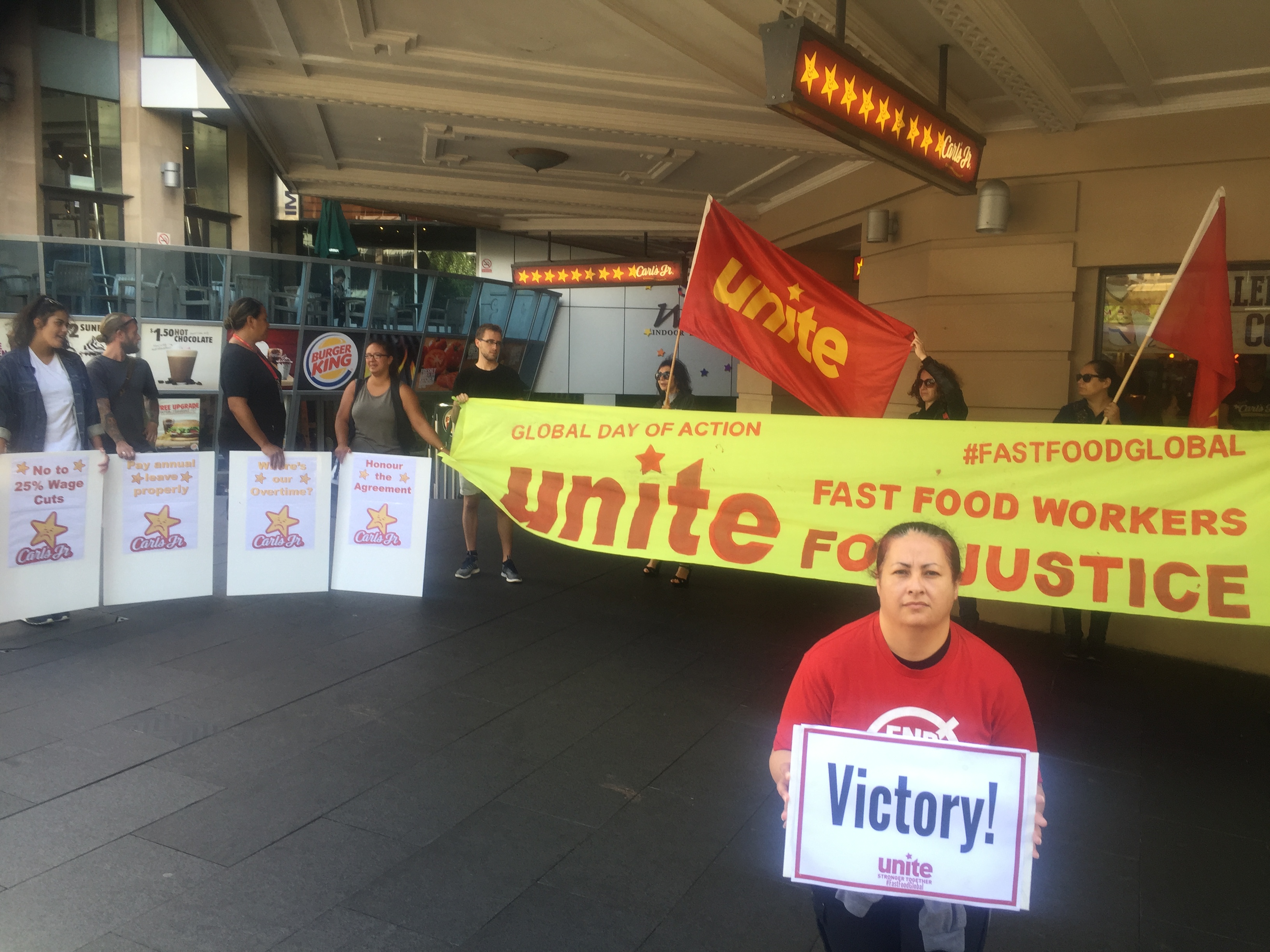 Yesterday we communicated with Restaurant Brands and informed them they would be a target of the international day of protest. We raised three demands: 1) that in all future Carl’s Jr Franchise proposals staff are offered the terms of the collective agreement at the new stores or similar positions with other brands. 2) The creation of a subsequent party clause to the existing collective agreement so that new franchise owners can be included in the same collective agreement. 3) An independent Auditor of the holiday pay issues. 4) Compensation for Carl’s Jr workers in Gisborne who have not been offered the same terms as they had been working.

On April 14 the company informed us they accepted all the claims and blamed the problems we had experienced on “misunderstanding”.

The pickets planned for April 14 went ahead. Outside Gisborne. they were renamed “victory rallies”. But in Gisborne, the picket continued because there remains an additional fight to get the franchise owner to agree to be a “subsequent party” to the union collective agreement. Unite remains absolutely determined that we will make that happen.

Gisborne Carl’s Jr is now owned by Attri Computing, owned by Deepak Attri and has no union collective agreement. 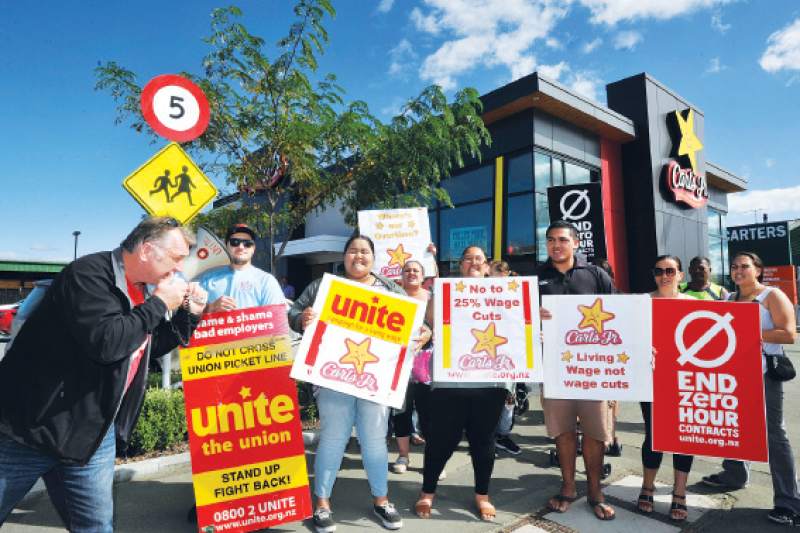 Unite Union National Secretary Gerard Hehir was at the protest today and met with Mr Attri inside the store. Mr Hehir told the media that “Mr Attri confirmed to me that his existing agreements are not compliant with the union collective agreement I told him on behalf of the union that we will be initiating bargaining for a collective agreement and that we know the people of Gisborne will support us. He proudly displays an ‘under local management’ sign in the front window, but locals shouldn’t undermine Gisborne worker’s pay and conditions.”

Mr Hehir said organisers would be visiting the store regularly to see if new staff wanted to join the union and get better wages and conditions.

“KFC and Burger King are within metres of Mr Attri’s store and both have collective agreements that protect hours, wages and conditions,” said Mr Hehir. “We don’t want a race to the bottom where wages are cut and workers suffer. Unite Union is asking the people of Gisborne to let Mr Attri know that they expect him to honour the existing collective agreement. The Carls Jr workers also need the support of the community in the coming months as they negotiate a decent collective agreement”. 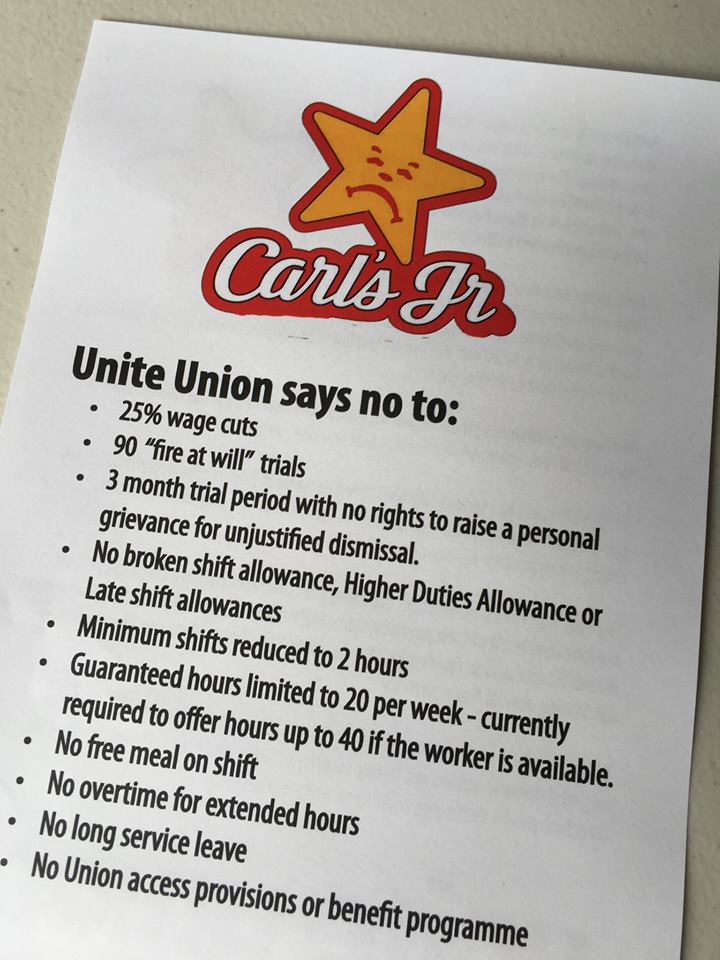