By Mike Treen, Unite National Director
The government claim to be introducing laws to “end unfair employment practises such as zero hour contracts” has been underwhelming at best.
I believe the government discovered just how widespread these types on contracts were and backed off making meaningful changes.

The recently announced unprecedented level of CEO salaries should give all conscientious Kiwis cause for concern. The scale of both the base salaries and the increases for New Zealand company bosses shows real inequity, and growing inequality between the pay rates of workers and elites. The growing gap between the rich and the poor is glaringly obvious there. Over the last 10 years CEO salaries have gone up an average of 107%. In the last year alone CEO pay rates rose an average of 10%. At the same time many lower level Kiwi workers received no pay rise at all or had pay rates that were virtually stagnant, with about only a 3% wage increase for Kiwi workers on average. 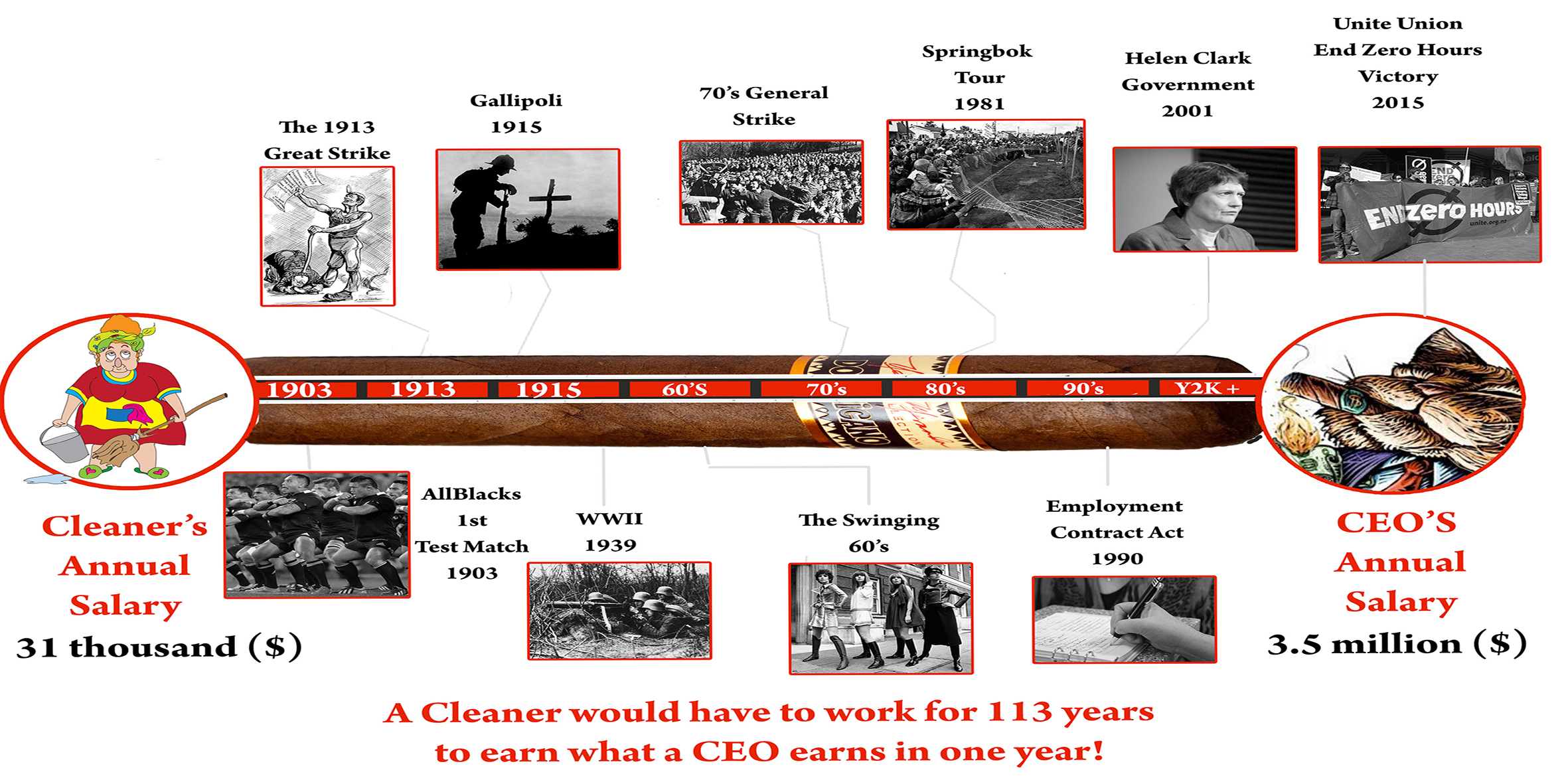 The New Zealand Labour Letter is provided as a service to Labour by AIL of New Zealand Ltd. Comments about the newsletter and your suggestions for news to report are welcome. Email, sga@ailnz.co.nz

Employees at AFFCO's Rangiuru plant are being forced to sign individual contracts against their will, the NZ Meatworkers Union declared. According to the union, the workers were told they would not be re-employed if they refused to sign the contracts which required more hours for less pay. The union lost a request before the Employment Court for a temporary injunction to block the company's action but vowed to continue the court fight. Union campaign director Darien Fenton said the workers were told not to report to work unless they signed the contracts. "The company has made it very clear that they require a signed individual agreement, so it really is they sign with a gun to their head," she said. "We'll live to fight another day - both in the Employment [Relations] Authority and in the Employment Court."

A spectre is haunting Europe - the spectre of a democratic alternative to austerity. The Syriza government of Greece incarnates that alternative, which is why the European Commission and the European Central Bank (ECB) have allied with the IMF to exorcise the challenge it represents. With few exceptions, political parties of every persuasion have tacitly or actively supported the anti-Syriza coalition.

On June 8 Murray Taylor became the fourth person this year to die while working in a quarry in New Zealand. The excavator Taylor was operating became buried under 1500 tonnes of rock when a cliff-face collapsed above him in a North Canterbury limestone quarry. 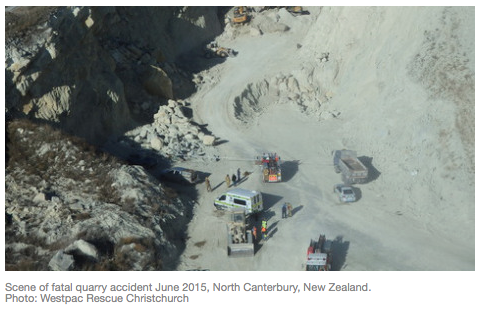 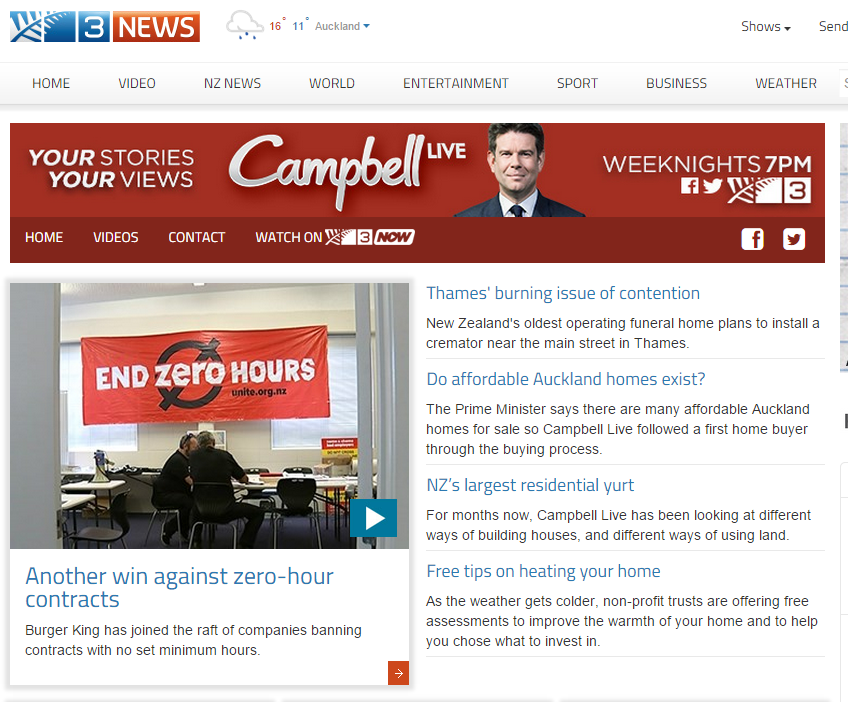 The members and staff of Unite Union are deeply disappointed at the ending of the Campbell Live show and the exit of John Campbell himself from this important part of the media landscape.

Unite has had a special relationship with John and his show for the decade the show has been running. In part our fortunes have been mixed together in ways few know about.

HOW UNITE TOOK ON THE FAST FOOD COMPANIES OVER ZERO HOUR CONTRACTS AND WON! 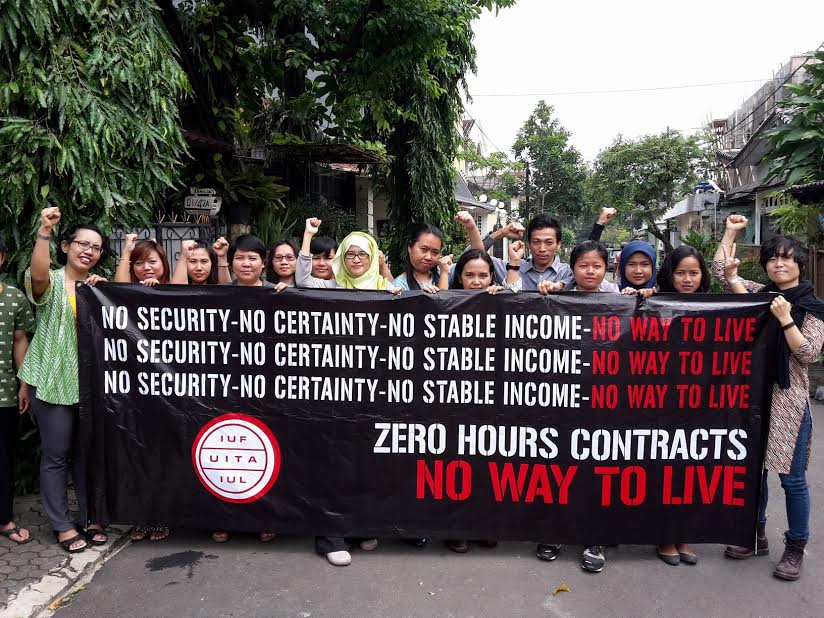 These Indonesian workers printed up a banner using a web design from Unite NZ to show support on February 14, the day of our national fast food workers meeting

Workers in the fast food industry in New Zealand scored a spectacular victory over what has been dubbed “zero hour contracts” during a collective agreement bargaining round over the course of March and April this year.

The campaign played out over the national media as well as on picket lines. The victory was seen by many observers as the product of a determined fight by a valiant group of workers and their union, Unite. It was a morale boost for all working people after what has seemed like a period of retreat for working class struggle in recent years.

Workers in the fast food industry have long identified “zero hour contracts” as the central problem they face. These are contracts that don’t guarantee any hours per week, meanwhile workers are expected to work any shifts rostered within the workers “availability”. Managers have power to use and abuse the rostering system to reward and punish, without any real means of holding them to account.

Unite has a vacancy for two full-time organisers:

The position will organise in the Central North Island region (including Waikato, Bay of Plenty and Gisborne) and will be based within Hamilton or Rotorua , depending on the successful applicant.

b)    A full-time permanent position based in Auckland.

McDonald's agreed May 1 to join Burger King and Restaurant Brands and cease using controversial "zero hour" contracts, announced New Zealand's Unite Union, which organises fast food, hospitality and retail workers. "This is a historic agreement. Now all of the major fast food chains have committed to ending zero hours. This is the culmination of a decade-long campaign for secure hours by Unite Union," said Unite national director Mike Treen. "It will be welcomed by tens of thousands of workers in the fast food industry and hundreds of thousands more who will ultimately benefit in other industries. It represents a fundamental shift in the employment relationship of the most vulnerable workers in the country." The victory came after a 10-year campaign by the union against the contracts which deny workers guaranteed hours each week. Unite had planned strikes across the country May 1 which it called off. "Zero hours" contracts refer to the fact that a worker is not guaranteed any hours of work during the week. 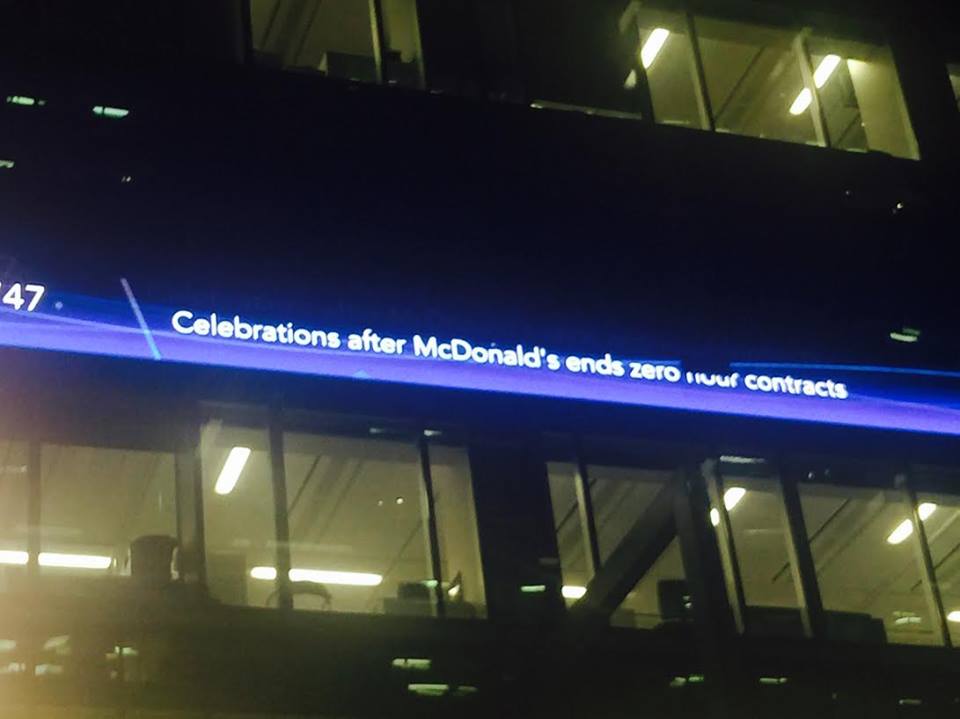 All trains stopped for one minute on April 28, International Workers' Memorial Day, in addition to other actions by the Rail Maritime Transport Union (RMTU) to push for a ban on asbestos. "A recent report urged the government to consider banning the importation and use of asbestos in New Zealand. Almost every week, RMTU members find new containments of asbestos in their workplaces" said RMTU General Secretary Wayne Butson. "This has to stop, but it cannot while the government continues to allow the importation of products containing asbestos". Other actions on April 28 included large ceremonies at the Dunedin, Napier, Christchurch and Lower Hutt rail workshops. Butson said RMTU members "feel very strongly" about this issue and Workers' Memorial Day "because our union has suffered a terrible loss of life within the rail and port industries." He said union members are committed to removing hazardous substances from the workplace and called on the government to make a similar commitment. 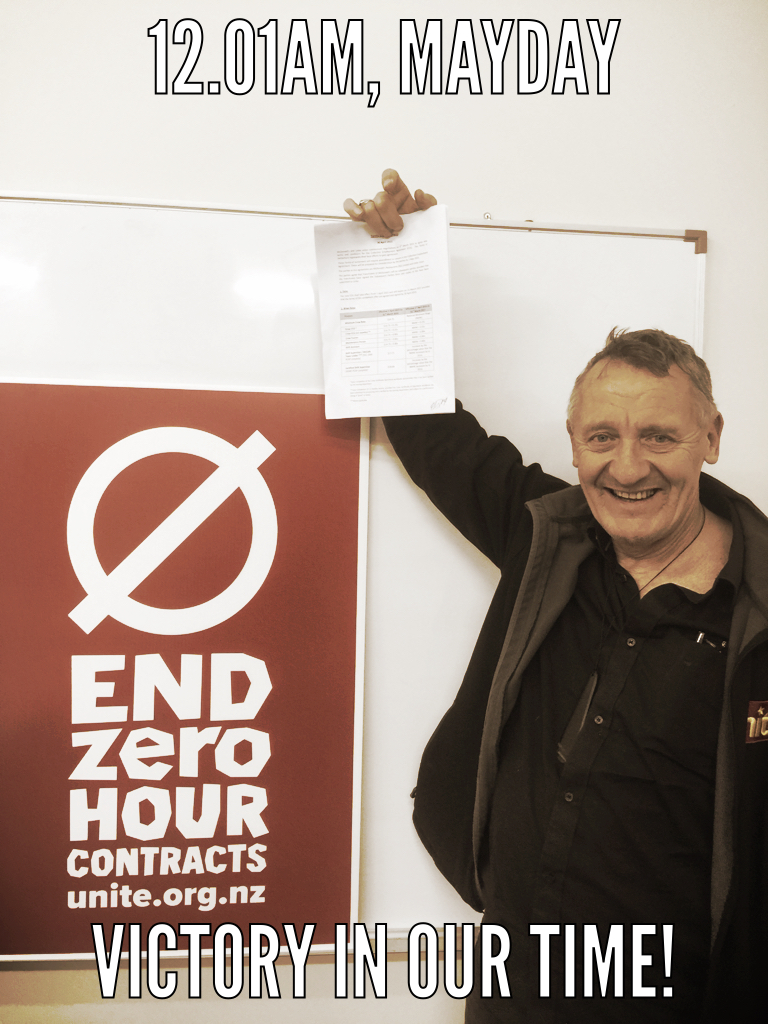 Unite National Director returns to office at 12.01am (May Day) with signed Terms of Settlement from McDonald's

Unite Union has reached an agreement with McDonald's over ending zero hour contracts and other issues in dispute with the company.

"This is a historic agreement" says Unite National Director Mike Treen. "Now all the of the major fast food chains have committed to ending zero hours. This is the culmination of a decade long campaign for secure hours by Unite Union. It will be welcomed by tens of thousands of workers in the fast food industry and hundreds of thousands more who will ultimately benefit in other industries. It represents a fundamental shift in the employment relationship of the most vulnerable workers in the country.
"At McDonald's 80 percent of hours worked over a three month period will be guaranteed. A survey on hours worked will be done every three months. This means the secure hours will be able to increase over time. The guarantee will begin from July 1. The company and union will review the application of this clause in March 2016. Both sides now accept that the clause will lead to greater security and regularity around rostered shifts.

"That means we are able to call off the planned strikes at McDonald's stores around the country.
"In some cases it will be too late to cancel the planned gatherings so we want supporters to have a victory celebration but not interfere with customer access.
"We haven't finalised all details in the agreement but we are convinced there is good will on both sides to work through the remaining issues without further protests being required.
"The company has agreed to work with the union on how the guarantee of 80% of hours worked will impact on the regularity and security of shifts in the future. There is also a ratification payment for union members only and a form for new staff at the head office owned McOpco stores to trial a system of indicating a desire to join the union. Franchise owners can also use the form. A working party will look at access protocols and the breaks regime.
"Unite wants to thanks the people of New Zealand for their support in this fight. We would not have been able to get this agreement on our own. McDonald's decision must mean the end of zero hour contracts elsewhere in New Zealand.
"Unite calls on the government to turn this decision into law for other workers in the country."