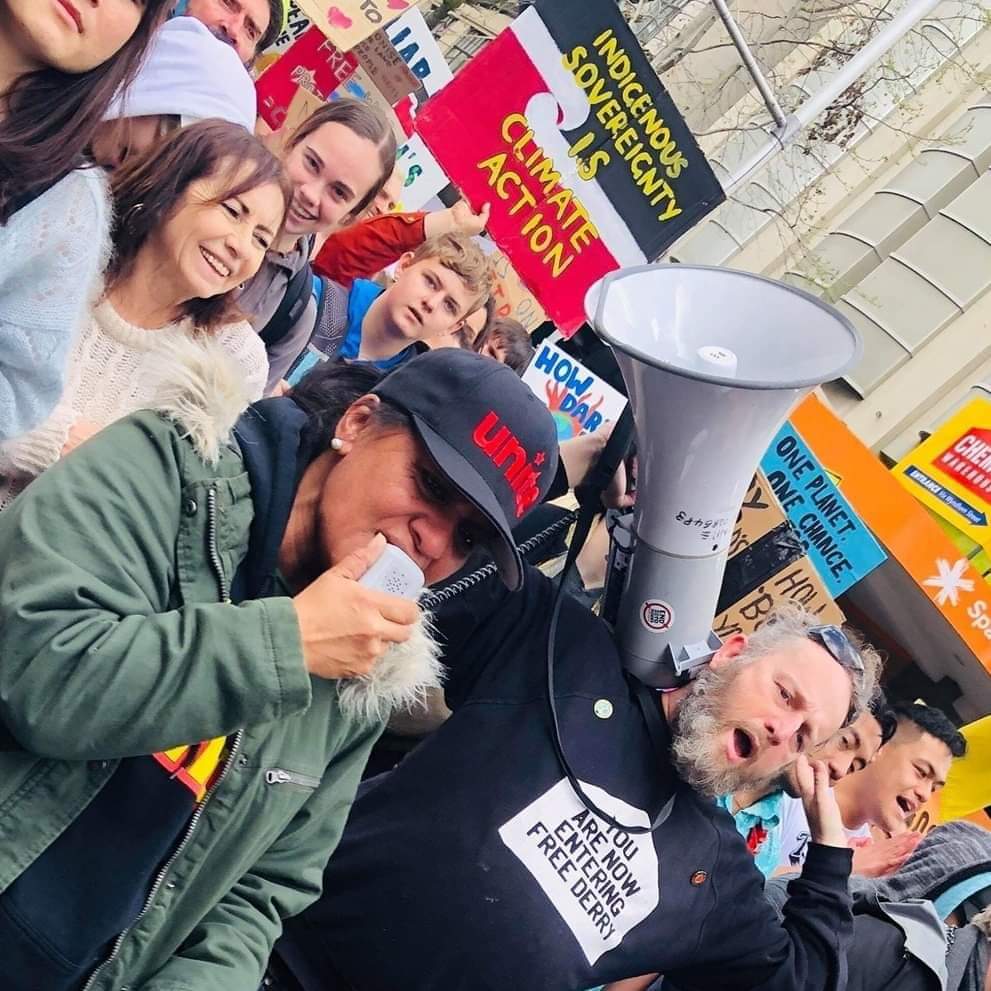 Tina Barnett, Aotearoa’s first workplace climate striker, leads her co-workers at the rally, demanding that SkyCity pays for public transport for its employees. 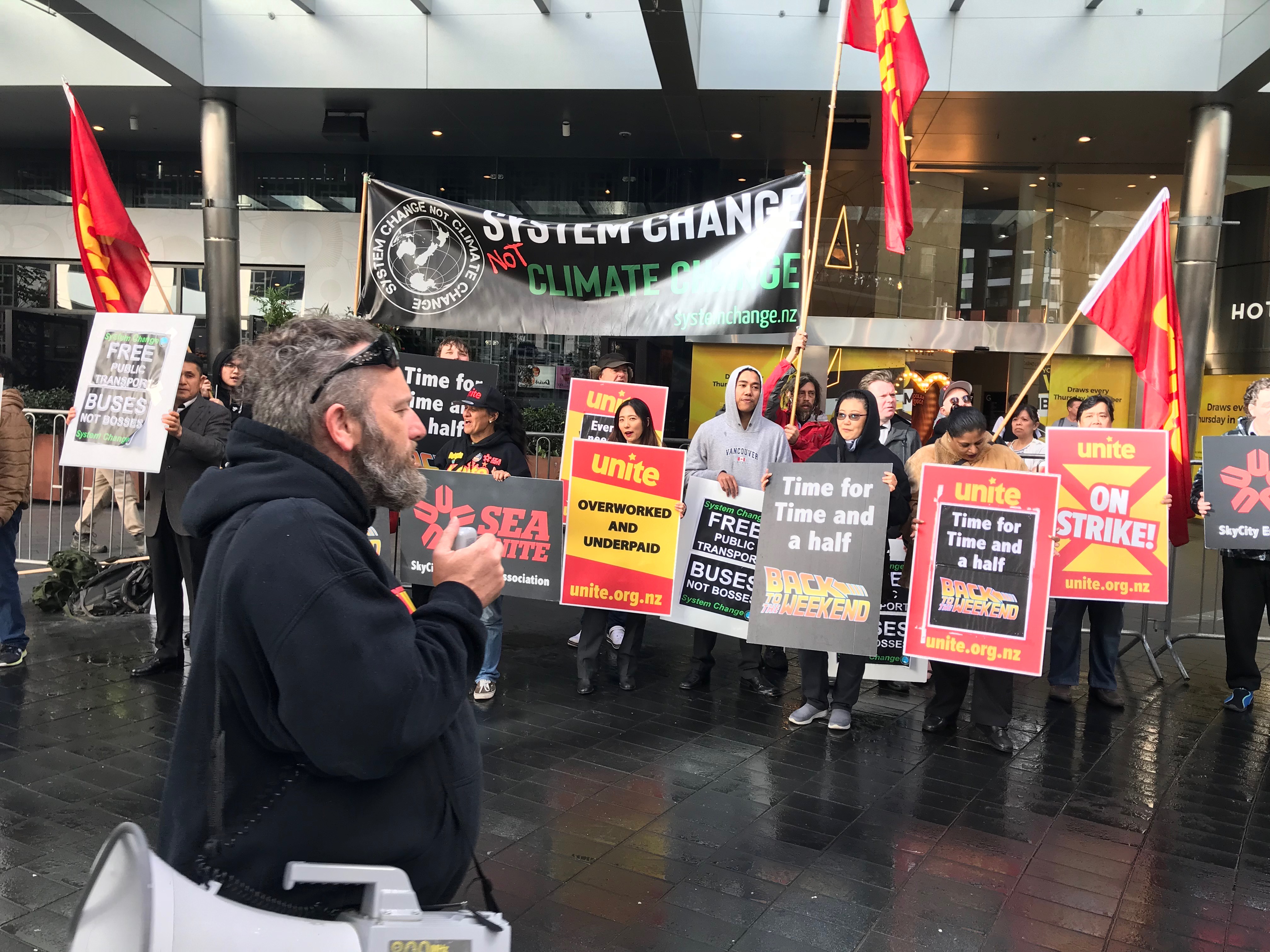 Over 95% voted to take strike action from 11.45am this morning so they can support the students in Aotea Square at noon.

“SkyCity has been making much of its carbon reduction policies, but unfortunately, the talk does not match what they are actually doing right now” said SkyCity Union Convenor Joe Carolan.

Unite is supporting the international climate strikes in New Zealand by scheduling legal stop-work meetings on Friday, September 27 in the main centres.

We are encouraging our members to start a discussion around the need for a transformation of economic and social life to stop the trajectory of the current system of constant warming to the point that life on the planet is threatened.

The basic science around climate change is clear. The earth is warming. It is the consequence of the industrial revolution associated with the capitalist form of production conquering the globe over the last 150 years.

Inaction will see the temperatures increase by 2 degrees on average by 2035 and possibly set off feedback loops that accelerate the warming process even more. 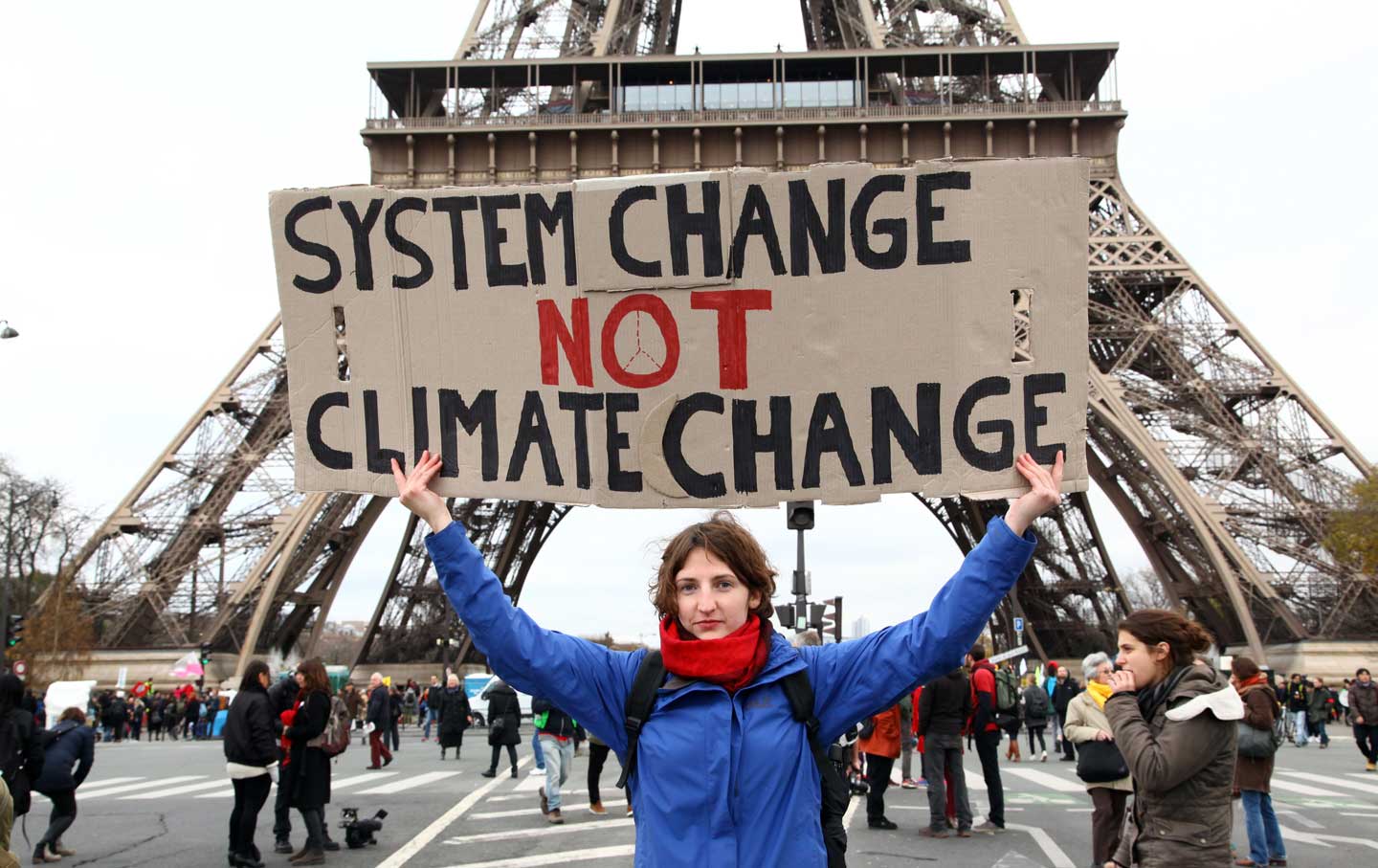 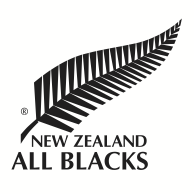 SkyCity casino workers going on strike so they can support the All Blacks this weekend -  Tūtira mai ngā iwi!

UPDATE: 97% vote in favour of the Rugby World Cup Strike. Hundreds of SEA-Unite union members have voted overwhelmingly to take strike action tonight to coincide with the All Blacks Rugby World Cup match against South Africa.

Tūtira mai ngā iwi, tātou tātou e   (Line up together people, All of us, all of us)

SEA-Unite union members at SkyCity casino in Auckland are voting on strike action to coincide with the All Blacks vs South Africa Rugby World Cup game this Saturday night.

The planned strike is for a brief picket at 9pm on Saturday and a rousing chorus of Tūtira mai ngā iwi,  after which the striking workers will head off to the Albion pub on Hobson Street to cheer on the All Blacks.

Why workers who are Pakeha benefit from positive action for Maori

Sometimes in my union job, I get asked why we are helping people from minority groups – like Maori or immigrants – when we should be looking after the majority.

Leaving aside the issue of the fact that my union – Unite – is probably a majority of various minorities – the question is easy to answer: We help these groups because doing so benefits all workers, including Pakeha workers.
Let’s look at some decisions by the government or government agencies over recent months that may appear to prioritise the needs of Maori and think about what their impact will be on workers who are Pakeha. 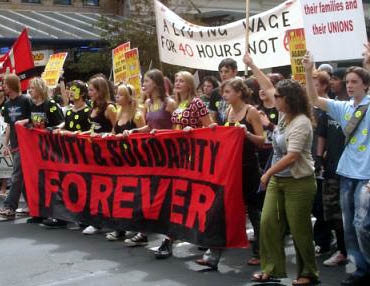 The Court case on overtime being calculated on a daily basis was taken by the Postal Workers Union to the Employment Court in December last year.

The decision from the Court was released on Wednesday. The decision is in favour of the Postal Workers Union. 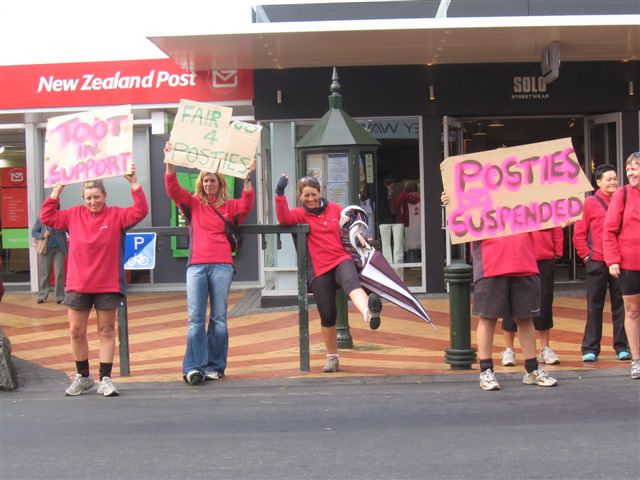 Hundreds of SEA-Unite union members rocked Federal Street outside SkyCity Casino in Auckland as they went on strike tonight to bring “back the weekend”.

Initial indications are that casino operations were severely disrupted with very long lines and delays for cashier services and many other services, such as security and cleaning already stretched to breaking after just a few hours.

“It was one of the best pickets the union has ever had. Very loud, very active and would have left SkyCity and their customers in absolutely no doubt about the determination of union members” said Unite National Secretary Gerard Hehir.

An Auckland fast food restaurant worker says they were asked to effectively continue working after clocking out. 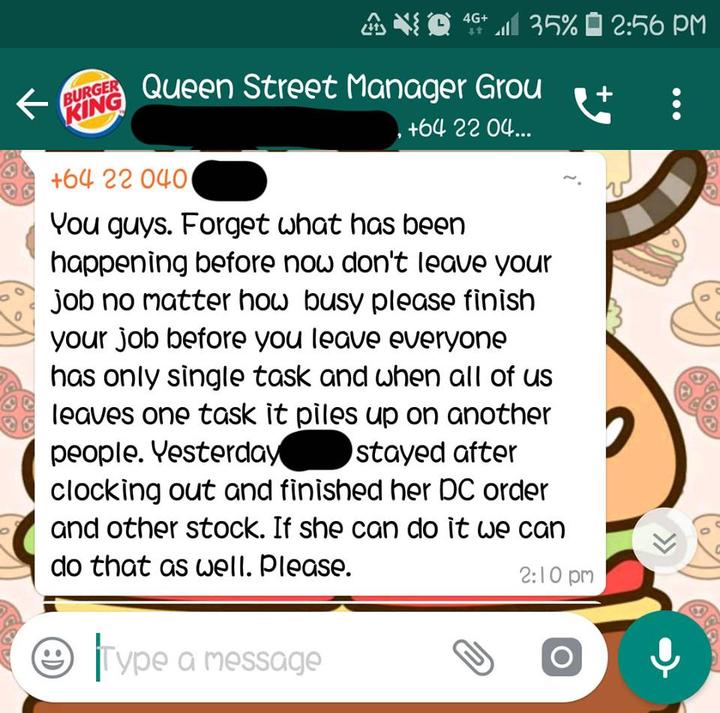 A screenshot showed a message was sent in a WhatsApp group chat named Burger King Queen Street Manager Group last week, which appeared to say a staffer stayed after clocking out, and "if she can do it we can do that as well".

A worker at the store by Victoria Street, who didn't want to be identified, said she believed the manager who sent the message was encouraging everyone to work for free after their rostered shift was finished.

SkyCity workers have voted overwhelmingly for strike action to get SkyCity to  recognise that workers should be compensated for the unsociable hours they do so that the casino can rake in the cash at nights and weekends.

Almost 900 of the casinos employees are members of Unite Union, under the SEA-Unite banner  (SEA = SkyCity Employees Association) and voted 94% to reject the last offer and 97% for strike action at meetings last week. A strike notice has been issued for 5pm Saturday 31st August to 8am Sunday morning. Mediation is not available until Friday 6th September.

The main union claim is for penal rates at nights and weekends to reward and encourage staff who are willing and able to work these hours and, crucially, allow others some choice about their work hours.

The campaign is called “Back to the Weekend” to underline the rights of employees to be able to choose to spend more weekends with family and friends like most other workers.

“The basic problem is that SkyCity needs most of its workers at weekends and nights and makes most of its income during that time – but prefers to use the ‘stick’ rather than the ‘carrot’ to get staff at these times “ says lead negotiator and Unite National Secretary Gerard Hehir.

American Income Life of New Zealand was a principal sponsor of this year's NZ Council of Trade Unions Women's Conference.
Over 150 delegates from around the country attended the 2-day event at Wellington's Michael Fowler Centre. Speakers included the new EEO Commissioner Saunoamaali'i Dr Karanina Sumeo, Mich-Elle Myers, National Officer of the Maritime Union of Australia, and Tania Te Whenua - the acting legal counsel on the Waitangi Tribunal Mana Wāhine Kaupapa Inquiry.
The Conference also included workshops on critical issues facing women in the workplace, and workshops for building skills, as well as panel sessions of union women on "Organising for Change."
Read more