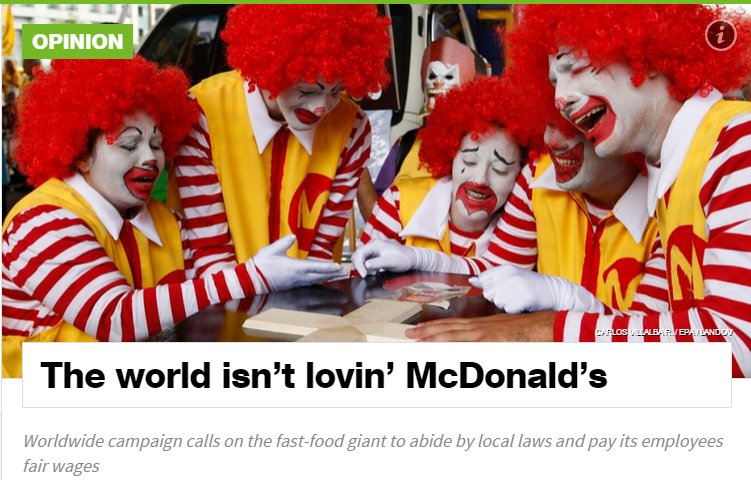 Media Release: 20 April 2015
Unite Union is questioning why McDonald's and Wendy's need government subsidies to hire staff on what the union says will be zero hour contracts.
"We have been told of many cases where McDonald's and Wendy's staff have been taken from WINZ in a subsidised job and then the workers have had their hours cut when the subsidy ends," said Unite National Director Mike Treen.
"We complained about this subsidy two years ago when figures obtained under the Official Information Act revealed that $272,574 was paid to McDonald's between July 1 2009, when the subsidies began, and June 30, 2013.  The subsidies will actually be much higher than this figure because 80% of McDonald's stores are owned by Franchisees and would be registered separately with WINZ as an employer.

"Sometimes McDonald's tells WINZ that the staff will get at least 30 hours a week. But after six months, when the subsidy ends the workers go onto a zero hour contract just like everyone else.

"Wendy's also takes subsidised staff from WINZ.
"It seems the only time workers can get guranteed hours at McDonald's and Wendy's is when they are being subsidised by the state.
"Unite remains determined to end zero hour contract regime at McDonald’s and Wendy’s. But until then WINZ should not be sending clients there for zero hour jobs.
"The zero hours regime is not a rostering mechanism. It is a tool to bully and abuse staff. It shouldn’t exist in the 21st Century in New Zealand. That is the message that needs to be continually delivered to McDonald’s and Wendy’s.
"There will be another national day of action to end zero hour contracts on Friday May 1 - May Day.

"Unite are asking people in the community to "Adopt a Maccas on May Day" and get together with their friends to hold placards outside their local McDonald's to tell the rest of New Zealand to show their solidarity with the McDonald's workers on this traditional international workers day by NOT buying a burger there.