The social movement of 2017 hit the streets of Glen Innes in strength yesterday to defend Ioela Niki Rauti from eviction at the hands of the State. Activists from many campaign groups united pledging material and physical solidarity to stop the ethnic and social cleansing of working class Glen Innes, built on Maori land to provide "homes for heroes" after the suffering of two world wars and the Depression. 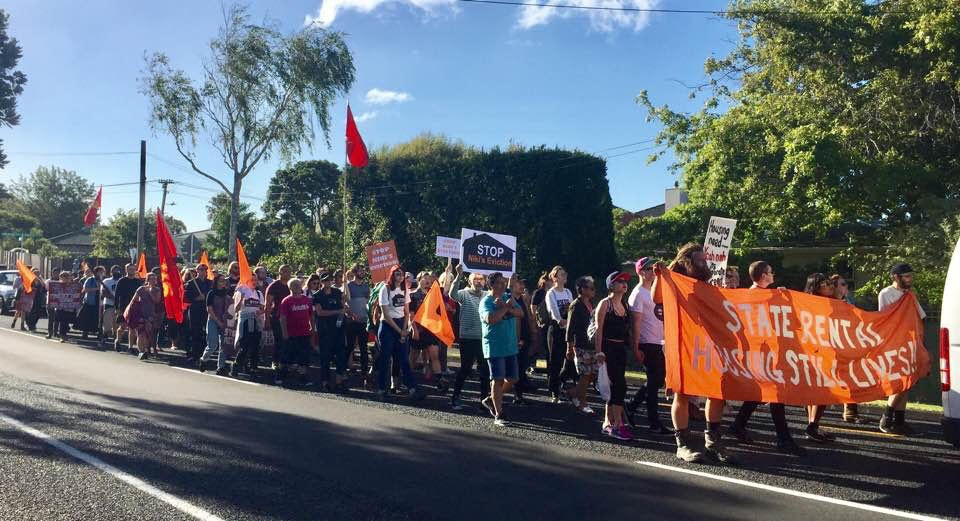 "Sometimes we need to put our bodies on the gears of the machine to stop injustice. There will be resistance to this eviction and solidarity with Ioela Niki Rauti. Her speech was the highlight of the Unite Union Conference before Christmas, and I was glad to see many of our activists and members supporting her yesterday. Other Unions like First Union and the Nurses joined the fight in numbers - it is time that the CTU lent it's organisational support to end the Housing crisis this year." said Unions Auckland Housing Committee chair Joe Carolan.

"We need rent controls and decent, healthy affordable accommodation for workers. The main way we can control rents is to flood the market with 100,000 new state houses. We also need an empty house tax of $3,000 a week, to force the owners of Auckland's 33,000 ghost houses to immediately help shelter our people living in cars, garages or the streets."

"This government and any other can be beaten by the People Power we saw on Taniwha Street yesterday. We beat them on the TPPA, on Zero Hours contracts- this year is the year the Housing Crisis explodes for Bill English. The downfall of the National government has begun with our solidarity with Niki - her eviction will be theirs".

Joe Carolan is also standing as a Socialist candidate for the Mt Albert by-election, standing on a platform of rent controls, an empty house tax, and the building of 100,000 new healthy state homes. People Before Profit -#SocialistNZ