Hi to all Unite Union members at McDonald's, Restaurant Brands, BK and Wendy's.

We are close to finishing negotiation for Wendy's and BK workers and both companies have promised to start their start at 10 cents above the minimum each year as well. 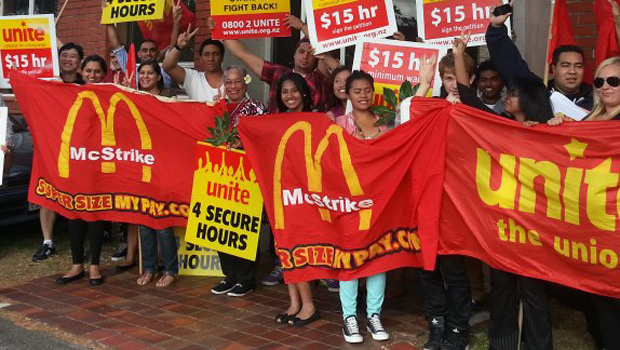 That means for the first time in New Zealand's recent history, all unionised fast food workers will be starting at least 20 cents above the minimum wage.

This is something worth celebrating.

But in addition, the new government has promised that they will continue increasing the minimum wage in three more steps to $20 an hour by April 2021. We believe that will involve an increase of $1 an hour next year and then $1.25 an hour for the next two years.

That will take us closer to our goal of having all fast-food workers on the living wage. The current living wage is $20.20 an hour which is equal to about two-thirds of the average wage.

A minimum wage of $20 in three more years lifts the minimum wage from 52% to 62% of the average. We will be using the future negotiations of the collective agreements to close the final gap that exists between what the start rate is in the industry and the living wage number at that time.

There will be some people who will try and claim that any increase in the minimum wage will lead to a loss of jobs. Don't believe them. The last time there was a similar percentage increase in the minimum wage over four years was from 2004 and 2008. During that period employment increased and unemployment fell - including for younger workers who had an even bigger increase than the average.