The September year report from Statistics New Zealand confirms the economy has stalled and unemployment is rising. But WINZ reports the number of people receiving considered work ready and receiving “jobseeker support” dropped by 1,022 between September 2014 and September 2015 from 66,754 to 65,732. The number on Jobseeker Support with a health condition or disability also fell. Total Jobseeker numbers receiving a benefit fell by 2,232 from 123,133 to 120,901.

This simply confirms that WINZ is continuing its brutal denial of income support without regard to their legal obligations.

This simply confirms that WINZ is continuing its brutal denial of income support without regard to their legal obligations.

There was a broad correlation between the number of people receiving unemployment benefits from WINZ and the number of people recorded as “Jobless” by the Household Labour Force Survey. When I used annualised data for the June years I found that beneficiary numbers were roughly 75% of the jobless number from 1990 to 2001. Then the percentage reduced every year until the series was discontinued in 2013 when the % hit a record low of 19%.

If the 75% ratio was applied to the current jobless number it would imply that there should be 200,000 people receiving the unemployment benefit when there are actually only 65,632 work ready Jobseeker beneficiaries.

Successive Labour and National governments have taken over a billion dollars a year out of working class communities and families. In my view this is grand larceny committed by the richest on the poorest in our communities and head should roll.

A declining percentage of the jobless able to access unemployment benefits 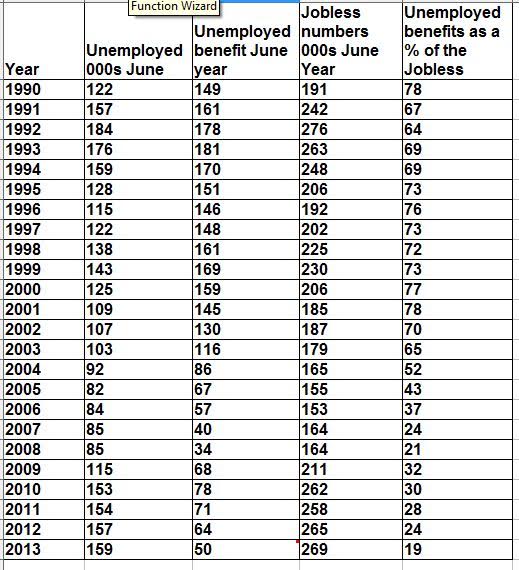