Despite its ‘neither confirm nor deny’ the government will host the signing of the TPPA on 4 Feb. The Herald this morning ran the absurd banner for its editorial: ‘TPP signing an honour, let’s respect it’.

If you live near or in Auckland – or are pissed off enough to travel a bit – the TPPA Don’t Sign campaign will kick off with a public meeting at the Auckland Town Hall on Tuesday 26 January at 7pm. 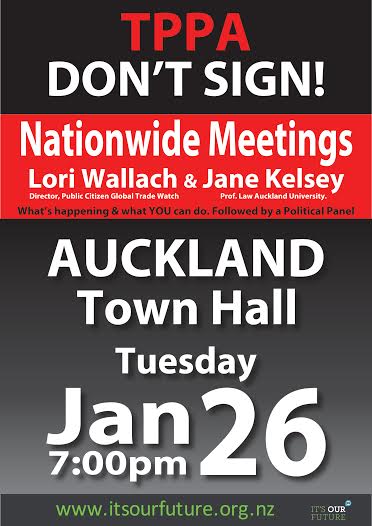 The star of the show will be Lori Wallach, the Director of Public Citizen Global Trade Watch, who knows more about what’s happening in Washington on the TPPA than Obama does!  Professor Jane Kelsey will also talk about implications for New Zealand, drawing on the expert papers progressively being posted here.

Then we have a political panel of parties who have been critical of the agreement, albeit to varying degrees. So far Andrew Little (Labour) and Metiria Turie (Greens) have said yes, and New Zealand First and Maori Party are working on schedules. Offers will also be made to the Government. The meeting will be live streamed on TDB.

Finally, there will be some suggestions of what YOU can do.

Please bring your cash and eftpos cards too – this is not a cheap exercise!

There’s also a Don’t Sign petition launched by ActionStation, Itsourfuture and ShoutOut – go here   and pass it around.

A givealittle page has also been set up to help fund the next part of the campaign.

Barry Coates, who has taken over from Ed Miller at the national spokesperson for the itsourfuture coalition will post more shortly.