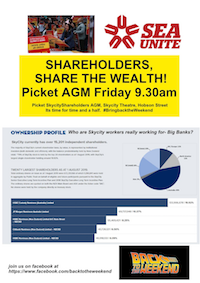 As SkyCity Casino shareholders attend their AGM tomorrow morning  they will be met by striking SkyCity Casino workers fighting to “Bring Back the Weekend”.

“Shareholders will have to walk past some of their low paid employees who are simply asking for some recognition for the unsociable hours they work to generate the huge profits for  the shareholders.“ says Skycity site Convenor Joe Carolan.

A strike ballot of union members today saw 98% vote for the strike over the weekend from 6am Friday to 8am Monday.

SkyCity’s major shareholders are mostly global banks such as HSBC, JP Morgan and Citibank. Nearly half are Aussie based and 80% is held by the twenty largest shareholders, with New Zealand retail shareholders owning just 16%.

The shareholders meeting comes as SEA-Unite revealed that up to 100 convention centre jobs are under threat because of the delays to the new Convention Centre, despite it being reported that SkyCity has received $40million in compensation for the delay.

“So Fletchers stuffs up and the shareholders get compensated for loss of profits, but the workers get….sacked. Maybe the shareholders and executives need a stint at playcentre to learn what all parents teach their toddlers - you can’t keep all the toys to yourself all the time, its better for everyone if you share.”