Talley's workers will need you again in 2016

Talley's workers will need you again in 2016

All year, workers in the Talleys owned AFFCO meat plants have been in a struggle with their employer.  Their union, the MWU, tried to settle an agreement to replace the 2012 collective agreement which came after an 84-day lockout.

But in June, AFFCO Talleys began forcing their workers to give up their union pay and conditions by making it clear that not signing a new contract meant no job. Around the same time, Talleys lost two Employment Authority cases in other meat plants, where the health & safety of workers caused harm to workers. And Worksafe decided to prosecute Talley's for a worker who was impaled on a meat hook at their North Island plant in Rangiuru.

In November, a full bench of the Employment Court found AFFCO Talleys had not only breached good faith and undermined the union, but had unlawfully locked out workers by forcing them to return to work on non union agreements.  Around 200 Wairoa workers refused to go back on these conditions and despite the court ruling, are still without work.

When MWU went to court ordered mediation, the company refused to allow the nationally and internationally respected Helen Kelly, former President of the CTU to be in the room to help represent MWU members. 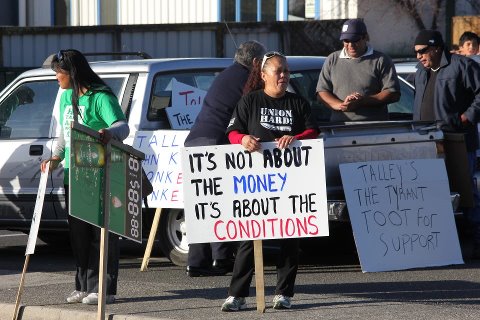 A week before Xmas, the company got silly about workers wearing their union t-shirts to and from work - nice green, peaceful t-shirts that say "Jobs that Count".  Three workers were stood down for wearing them and another worker's job is on the line for videoing the intimidating actions of the manager in requiring workers to take off their t-shirts.

Two days before Xmas two of our outstanding workplace leaders, mothers and leaders, Bertie Ratu and Charmaine Takai were sacked for going to work early to talk to union members who were upset.  This came after three weeks on unlawful suspension without pay.

The problem for Talley's is that people are noticing. People up and down the country are now saying they will never buy Talley's products again. There's questions being asked in international supply chains. As we've found out frequently, Kiwis are not keen on companies that treat their workers badly.

2016 is going to be another year of it.  This wealthy family will appeal all court decisions and fight the workers every inch of the way.

They will pick on union members and try to make out the blame lies with those who are part of the union.

So we're going to need you in 2016. Your contributions to locked out workers, for signing up to volunteer, for signing our petition, for telling Talleys what you think helps give courage to these workers, as they continue to fight. They're going to need you, so get your friends and family to sign up to www.Jobsthatcount.org.nz and stand together with them.
Have a great 2016.

"A leader leads by example, not force" - Sun Tzu.