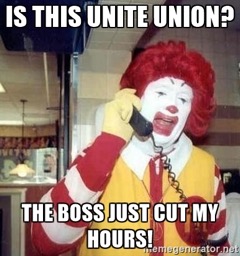 Unite union has made a public appeal for Ronald Mcdonald to make contact about dramatic cuts in his hours of work.

“There are many media reports that, due to the “creepy clown” phenomenon, McDonalds has dramatically cut back on Ronald’s hours of work" said Unite National Secretary Gerard Hehir (see  Radio New Zealand: McDonalds not clowning around ).

McDonalds committed to Unite last year that all their workers being guaranteed at least 80% of their usual hours each week. We are asking McDonalds to confirm that they will honour this agreement with Ronald.  The creepy clown craze is not Ronald’s fault and he should not have to go back to a zero hours contract and suffer because of it.”