Towards the end of last year there were a relentless series of stories of corporate malfeasance.

Pumpkin Patch shut up shop with the loss of hundreds of jobs and is refusing to pay its workers in New Zealand the redundancy pay they owe them by hiding behind a corporate structure that pretends that there were different companies involved when they all have the same ultimate owners. 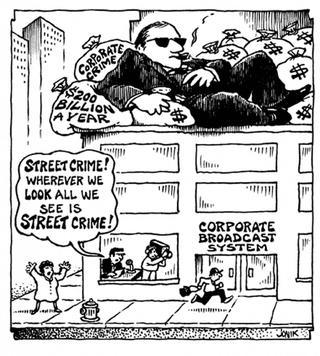 We also learnt that as at October 13, 2016, 42 workers had been killed on the job (excluding maritme, aviation and road deaths). That is only one less that 2015 with two and a half months still to go. The government made a big deal of changing the law after the Pike river disaster with the claim that it would make us safer but it hasn’t. Agriculture was deemed not a high-risk sector and excluded from the requirement to have elected health and safety representatives.

I’m also convinced that the government is assisting the company’s refusal to reopen Pike River mine because they don’t want the truth about the corporate murder of 29 miners that occurred to be revealed.

Earlier this year Dick Smith was driven into receivership with the loss of 3000 jobs across Australia and New Zealand. It seems like a case of corporate fraud on a grand scale. A group of private equity investors buy the company for $20 million, inflate the value of the company artificially through stock manipulation, float it for $575 million, then walk away to watch it collapse with $370 million in debt. In New Zealand, no government agency or court has even bothered to ask any questions as to how and why that occurred. Forager Funds Management analyst Matt Ryan dubbed it “one of the great heists of all time“.

During November 2016, we had the embarrassing spectacle of our Prime Minister politely suggesting to the Facebook CEO that it would be good for their corporate PR if they paid some tax. Major companies treat tax as a voluntary activity and can usually design their affairs to avoid paying.

A NZ Herald investigation in March 2016 found “the 20 multinational companies most aggressive in shifting profits out of New Zealand overall paid virtually no income tax, despite recording nearly $10 billion in annual sales to Kiwi consumers.

“The analysis of financial information of more than 100 multinational corporations and their New Zealand subsidiaries showed that had the New Zealand branches of these 20 firms reported profits at the same healthy rate as their parents, their combined income tax bill would have been nearly $490 million.”

It would be very easy to simply pass a law that applied to these companies and made them pay tax like everyone else!

Rich individual act exactly the same. An IRD investigation in 2013 found that “Two-thirds of New Zealand’s richest people are not paying the top personal tax rate, with increasingly complex overseas schemes and bank accounts being used to evade the taxman. Inland Revenue has found that 107 out of 161 “high-wealth individuals” who own or control more than $50 million worth of assets declared their personal income in the last financial year was less than $70,000 – the starting point for the top tax bracket of 33 cents in the dollar.

The government and IRD seem to get very brave when persecuting some small business person who falls on hard times but run away from a fight with the real big boys who dodge taxes.

The NZ Herald reported October 22, 2016, that the government abandoned promised action to close on of the big loopholes used to avoid tax liabilities. Often companies load their business up with debt which may come from related parties in the same business group. Interest costs are deductable as an operation expense so headline profits are minimised and no tax needs to be paid. This is a tool used by private equity companies who may use little cash of their own but through loading the company massively with debt they can use debt to take control.

The greedy banks that finance these operations in the hope of big returns can sometimes get burnt as well. But usually, it is the workers and small shareholders who are left carrying the can. This tax dodge is such a scam that even the corporate friendly OECD group of countries agreed in 2015 to recommend the activity have limitations put in place. But along with action against tax havens promised after the scandals associated with the Panama Papers which have also been quietly shelved.

Actions by the owners of some schools in the so-called education export sector appear to be simply criminal in nature.

Students have been enticed into the country, paying high fees for dubious courses in the hope of being offered work and a road to citizenship eventually. The students were being ripped off by the schools and often by employers when working part-time jobs as well.

One of these schools International Academy of New Zealand (IANZ) was reported by teachers whistleblowers early in 2014 and again last year but were allowed to continue to operate what was essentially a criminal enterprise. One of the owners of the school tried to sell his home last week for over a million dollars and plans to relocate to Australia with his spoils. The husband of another school owner had previously been convicted of abusing and exploiting migrant workers elsewhere in New Zealand but was employed as marketing manager by the school. Schools have to make statutory declarations that the owners and senior staff are fit and proper people. A google search would have revealed the opposite.

When more teachers came forward earlier this year and the school was being investigated more thoroughly they simply wound up, abandoning their students and staff. Some students English language qualifications, attested to by the school, were simply fraudulent and the students face being deported as a consequence.

Business owners have different rules applied to them when they break the rules compared to working people. A solo mum whose boyfriend stays a few too many nights will get hounded out of benefit and prosecuted and jailed as a consequence. A worker who eats a bit of product at a BK will be sacked instantly. Workers are taxed to death because we have to pay our taxes before we even see our pay. And we get gouged for fees by privatised companies and service providers that used to be a right or free service. Even getting a drivers licence has been turned into a profit-driven enterprise with huge failure rates being imposed so our young drivers are forced to sit and resit the test for high fees.

State agencies can routinely and systematically deny people access to ACC, welfare benefits, and child disability allowances and yet, for them, there are no consequences. Major companies like Talleys’ can routinely ignore the law around workers rights to union representation and the penalties imposed are token. Going to work in a Talley’s owned plant seems to be a health and safety risk in itself.

The only way we can turn this reality around is we have a government that takes our side as strongly as the bosses and their parties defend their interests when in government. I am not seeing that yet from Labour and the Greens.