MESSAGE FROM THE INTERNATIONAL UNION OF FOODWORKERS

Talleys Group Ltd is a New Zealand company that has consistently sought to restrict and, wherever it can, eliminate union representation within its group of companies.

Many workers in its meat processing operations, AFFCO and South Pacific Meats, belong to the New Zealand Meat Workers Union (NZMWU). There is no union membership elsewhere within Talleys’ operations in fishing, food processing and dairy. 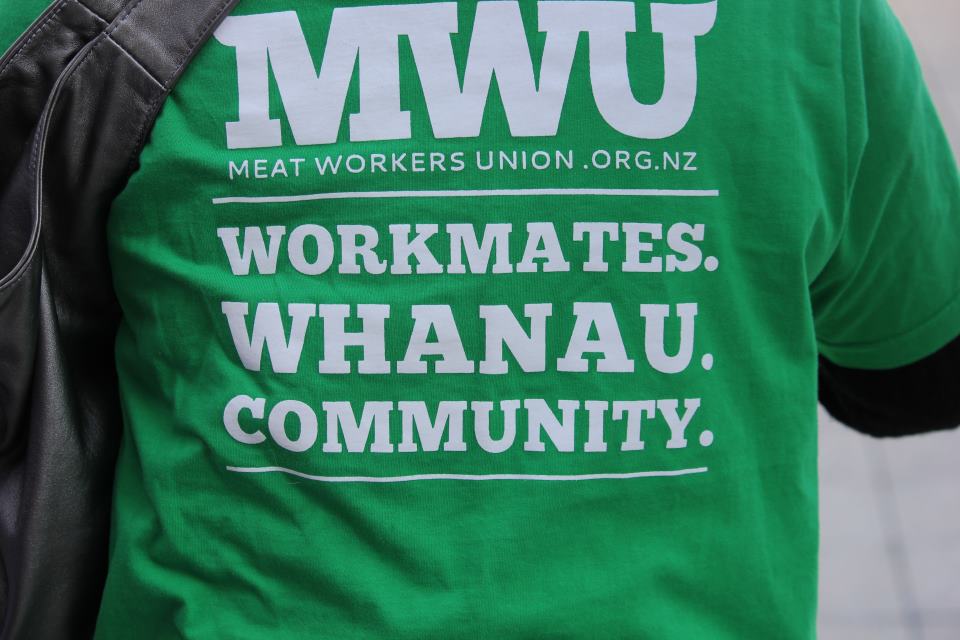 Throughout 2015, the NZMWU has attempted to negotiate an agreement to replace the collective agreement negotiated only after a lengthy lockout in 2012 with AFFCO. That agreement expired in 2013. Last June AFFCO began pressuring employees on seasonal layoff to give up their unionnegotiated pay and conditions by insisting that employees could only continue working at the company if they signed individual employment contracts. Two hundred workers at the company’s plant in Wairoa refused to do so and have been locked out of their jobs ever since.

In November, the New Zealand Employment Court determined that, by compelling the workers to sign individual contracts and undermining the union, AFFCO had acted illegally. The court-ordered mediation process has been unable to deliver a solution owing to the company’s fundamental refusal to negotiate.

In the week beginning December 14, three workers at the Talleys plant in Rangiuru were suspended for wearing union shirts to and from work. On the front of the shirts is written “Jobs that count”; on the back, “MWU (Meat Workers Union) workmates, whanau (Maori for ‘family’), community”, with the union’s website address.

On December 23, two Rangiuru workplace union leaders were dismissed on bogus breach of health and safety charges after going to work before their normal shift time to talk with union members in need of support. One of these union leaders is Roberta (Bertie) Ratu, who represented her union at the IUF global meat conference in Chicago in October last year.

AFFCO/Talleys are trying to destroy collective bargaining and union representation with a lockout, dismissals and intimidation, even dictating to employees what they can wear to and from work.

The NZMWU is engaged in a prolonged industrial and legal fight on behalf of its members employed by an aggressive union-busting company.

The IUF calls on affiliates to send a message of solidarity to the NZMWU in this important national struggle on behalf of their members employed by Talleys/AFFCO.