An Affco cleaner impaled through the head with a mutton-spreader hook says he still has nightmares about the workplace accident which left him with life-changing injuries.

Jason Jerry Matahiki, 43, who was giving evidence during a judge-alone prosecution hearing which began in Tauranga District Court yesterday, said he was part of night-shift cleaning crew working in the head-off machine area of the mutton room on August 19 last year. 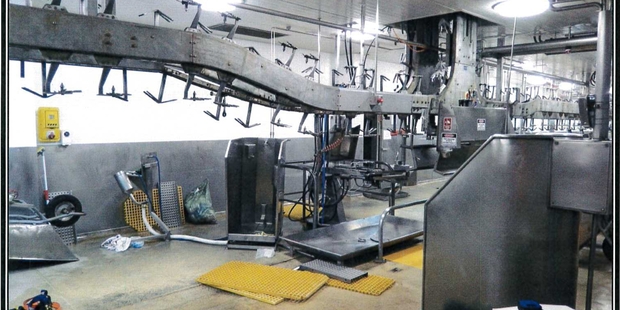 The head-off area and row of spreader hooks on a chain in the mutton processing room at Rangiuru meat processing plant where Jason Matahiki was impaled on August 19, 2014.

Mr Matahiki said he could not remember exactly how the accident happened but the results had been life changing - he had yet to return to work and his face had not fully healed. "The doctors say that some scars can be fixed but some scars can't. I have a constant reminder every time I look in the mirror and every night when I try to go to sleep I have nightmares."

Mr Matahiki said he still had a floating sliver of cheekbone in his face which his specialist was reluctant to try to remove, and he had ongoing pain in his head and dizziness. "It's been quite stressful for me, my wife and family and very frustrating. I used to be a confident person but I am not now," he said.

Affco New Zealand Limited is defending a Work Safe New Zealand allegation that the company failed to take all practical steps to ensure Mr Matahiki was not harmed at his work site - a charge which attracts a maximum fine of $250,000.

Crown solicitor Greg Hollister Jones representing Work Safe New Zealand told Judge Peter Rollo that Mr Matahiki was impaled by a spreader hook on a moving chain, then carried along into a nearby stainless steel scanner frame that was no longer being used and has since been removed. The hook entered behind his left ear and it came out by his left eye, trapping Mr Matahiki between the frame and the chain, which continued to move, he said.

Mr Hollister-Jones said it was only due to the quick actions of other staff who managed to stop the chain moving and freed Mr Matahiki which prevented more serious injuries.

Central to the prosecution case was whether there was a robust safety system in place to ensure the chain did not move in these circumstances, he said.

Affco's lawyer Mark Hammond said the defence position was that the victim should never have been standing on the head-off tray near the chain in any circumstances and could have eliminated the hazard by pushing the button. The cleaning crew could have also adopted lock-down procedures, he said.

Mr Hammond put to Mr Matahiki that he must have been standing on the head-off tray under the moving chain as Work Safe NZ accepted that must have been the case.

But Mr Matahiki insisted he could not have been, because he knew that was an unsafe. On the day of the accident, they had been rushing to finish because the company manager had reduced their allocated hours to do the work, he said. While there was a red emergency button to stop the chain moving it was not unusual for it to be moving in the mutton room while cleaning was going on, he said .

Former Affco cleaning supervisor Jay Hirini said machine lock-down procedures were standard practice in the lamb processing room but not in the mutton room. Mr Hirini said he was aware the disused scanner frame was there but never identified it as possible hazard.