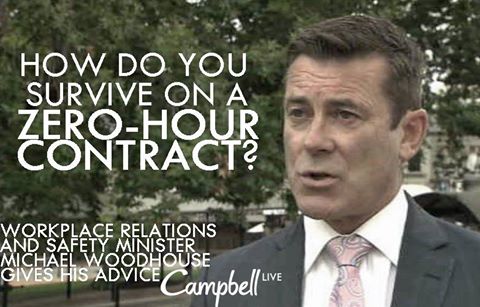 And now, after promising to ban the punitive aspects of zero hour contracts, the Minister is championing a Bill that will entrench them. It appears that we have a government and a Minister who operate in a kind of cul-de-sac, making promises on the way in and then delivering a different result on the way out.

This is the story of the Employment Standards Bill, or the zero hours bill. Following a tremendous public backlash against zero hour contracts in the first four months of this year, the government caved to pressure from workers, Unite Union and the public and the Minister promised to fix the "punitive aspects" of zero hour contracts.

Yet the Employment Standards Bill does no such thing. Instead it entrenches zero hour contracts. Take the provisions around cancelling shifts, one of the worst aspects of zero hour contracts. Employers can still cancel shifts, the only change is that the employer must provide "reasonable notice" and compensation.

But these changes are cosmetic. Reasonable notice isn't defined - could it be one hour before you're meant to start work? - and neither is compensation - could an employer get away with paying you for one hour rather than for the entire shift? The Bill should clarify this because we know the sort of dodgy employers who impose zero hour contracts are the ones who would exploit poorly drafted laws.

The attractive thing about zero hour contracts for employers is that it's a tool for coercing - or, as some employers might say, incentivising - workers by withholding hours for those who, say, join or form a trade union.

The Employment Standards Bill doesn't go nearly far enough to correct this brutal power imbalance, one in which the employer is in the driver's seat while the worker is buckled up in the back.

This issue is too big to get wrong. The Council of Trade Unions estimates that 635,000 New Zealanders are in 'insecure work', with 95,000 workers having no usual work time.

In other words, there could be 95,000 Kiwi workers on some form of zero hour contract.

If the government doesn't ban zero hour contracts is it possible that you or I might one day be part of the 95,000?