Our Inland Revenue Department has a “High Wealth Individuals Unit” (HWI Unit) which collects information on the wealth of “people who have, or are in control of wealth over $50 million”

For the 2014 year, the HWI Unit has identified over 212 people who meet this criteria and furthermore these 212 HWI’s control, or are closely associated with, 7,009 “entities” – mainly companies and tax-haven trusts – with control in some cases shared with other HWI’s. 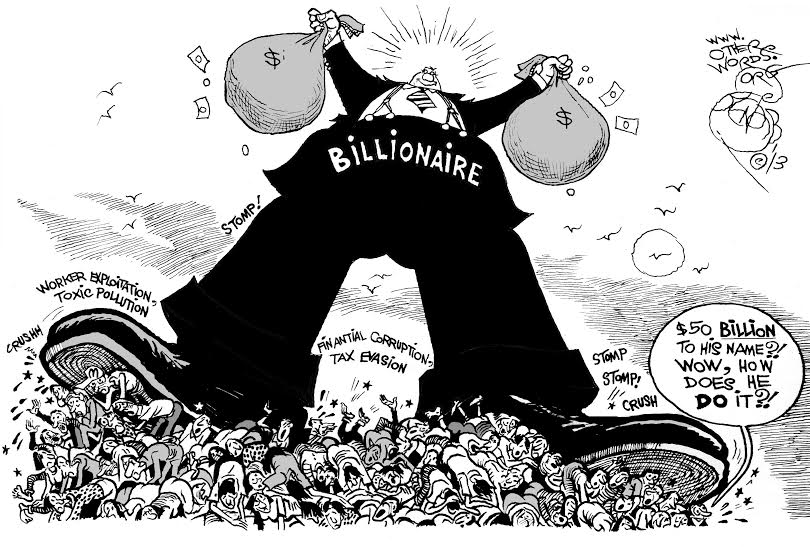 The most appalling – but not surprising – fact is that 87 of these HWI’s declare a personal income of less than $70,000 – the income above which the top tax rate kicks in.

This information is missing from the NBR’s rich list published last week which focuses solely on celebrating the “success” of the wealthiest but failing to reveal that the average wage or salary earner pays much more personal tax than these money-sucking parasites.

How do these HWI’s get away with paying less tax than the rest of us? Why is it that the vast majority of us pay tax on every dollar we earn and every dollar we spend while for the wealthy tax is essentially voluntary? Why is income from shares, investments, dividends and capital gains exempt from the same tax levels paid by wage and salary earners?

These same rich listers enjoy all the benefits of living here: driving on our roads; visiting our museums and art galleries; subsidised doctor’s visits; ACC entitlements, national superannuation etc but pay pocket money to maintain them. They use our community facilities and enjoy the benefits of everything we pay for through taxes but won’t cough up themselves.

They are the ultimate bludgers, protected from taxation by successive Labour and National governments who need their donations to run election campaigns.

When GST was introduced by Labour’s Phil Goff in the 1980s one argument Labour gave in its favour was that the rich would no longer be able to avoid tax – they would pay the same as the rest of us. The reality is the opposite. The rich pay less than 5% of their incomes in GST but our lowest-income families pay 14% of their income on this vicious tax-on-the-poor.

Typical descriptions of the parasitic rich-list elite is that given to the first, Graeme Hart, described as a “self-made billionaire”. Yeah right! Like the others Hart has simply learnt cunning ways to exploit the wealth created by the workers in the businesses he owns. His companies pay their workers as little as they can get away with rather than the most they can afford – all for the purpose of enriching Hart.

New Zealanders on the list were on average 7.4 per cent wealthier than they were in 2014 while back in the real world the minimum wage increased by 3.4% this year. One media story reported Hart’s wealth went up by $63 every second last year – even when he was sleeping – while the minimum wage went up by a miserly 50 cents an hour to $14.75.

Minimum wage workers pay about 26% of their incomes in tax (income tax and GST) while the rich listers wouldn’t even get close to double figures.

Bludging bastards with their protective layers of bought politicians.