Old McDonald's had a strike....

Old McDonald's had a strike.... 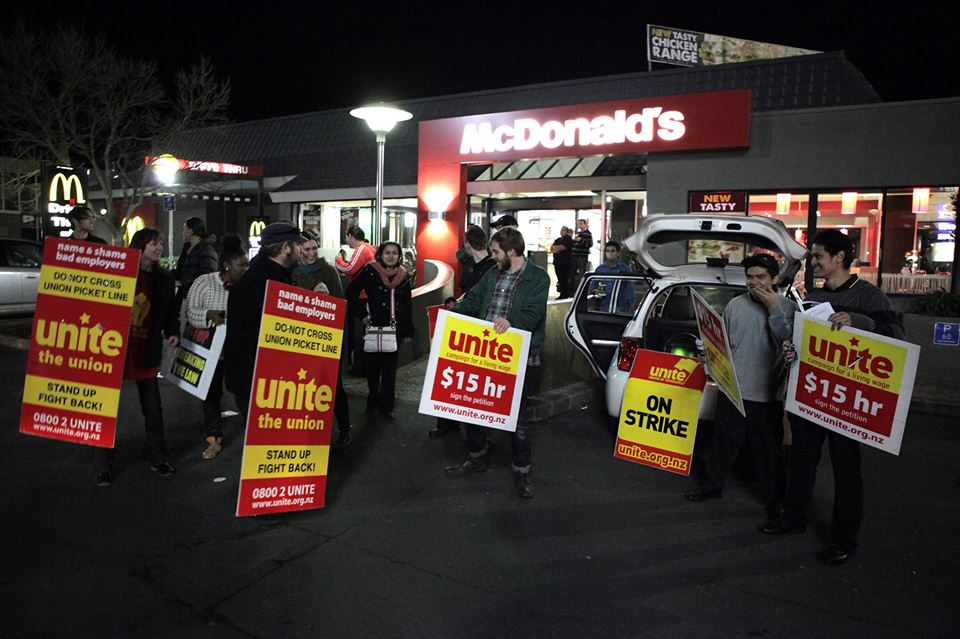 The author is a McDonald's crew member in the South Island.

Going on strike is scary, but it's also very exciting.

It's not like other kinds of protest. You're not just showing up to the city square at 3pm, marching down the road shouting about the war/the environment/the Illuminati lizard people then going home to obsessively search Facebook for photos with you in them. Instead, you have to walk off your own job, under the watchful and perhaps slightly disapproving eyes of the shift manager.

Normally these are the guys in charge, the ones who tell you what to do, but for this one moment, on this one day, life gets flipped-turned upside down and you take control. It's exciting, but it can also be very scary.

In the days leading up to the strike you sneak conversations with your coworkers while the managers are out back. You remind them that the union is negotiating for us all to get secure hours and higher wages, and that the bosses are refusing to budge. You argue that if we strike it'll show the company that we means business, and it'll put us in the media – who, for once, are overwhelmingly on our side. Everyone knows zero hour contracts are bullshit.

You ask them what we're going to remember ten years from now; the day we stayed inside and followed the rules like good boys and girls, or the day we walked out and went on strike? What will we be most proud of? What story do we want to tell?

Not everyone is immediately or easily convinced, but it's surprising (almost amazing!) how quickly some people are won over. It's not necessarily who you might have thought. Some people are keen as soon as the word strike gets mentioned. There are rebels everywhere and this time it's for a bloody good cause.

As the day of the strike grows closer and closer, you become nervous. That's normal. When you're asking someone out to see a movie and grab a drink or twelve, or when you're hosting a party at your flat, a part of you always worries about the worst case scenario. Maybe she won't like your shoes? Maybe he won't think you smell good? Maybe no one will show up, and you'll be left all alone in an empty lounge, drowning your sorrows in cheap whiskey and potato chips before falling asleep in a puddle of your own vomit and tears?

It doesn't tend to turn out like that though. Chances are you go to the movies, dance badly at some bar afterwards then go home for a bloody good night. Chances are you worry about who's showing up so long and hard you forget you never rock up to a party on time either, and before you know it all your friends have arrived fashionably late and the only problem becomes an imminent shortage of those little red plastic cups.

There are haters, of course. There always are, and they always gonna hate. Some people are anti-union (usually for a variety of rather confused and ill informed reasons), some people are too scared to rock the boat, some people have just accepted they get paid the minimum wage and don't think they deserve better. Those people are the saddest of all.

In the end, though, who cares? You don't have to bring everybody out with you. You can strike by yourself if you want! If you bring even one other person out with you, you've already won a big victory by convincing another person that collective direct action and solidarity with fellow workers can get the goods. If you bring more than one person out? Well, you're a working class hero, and that's always been something to be.

If we strike, we can win. If we don't, we will lose. We deserve to win, because we're worth more than minimum wage. We deserve to have secure hours. We're in the right and the rich, greedy, stingy bosses are in the wrong. It's as simple as that.

This Friday May 1st, McDonald's workers around New Zealand will be going on strike to protest zero hour contracts and demand higher wages. Their union, Unite, has already convinced most of the other fast food companies to offer workers a fairer contract. McDonald's are the last ones looking for a fight.

The workers and their union are asking New Zealanders not to eat at McDonald's on May Day, and if you drive past a picket line, please toot your horn and wave in support.