New Zealand Education Institute, the country's largest education worker union, announced it will sue the government on behalf of education support workers over gender discrimination. “The Government has been ignoring this human rights issue for far too long and we will now pursue our case through the courts,” said NZEI National Secretary Paul Goulter. NZEI said that more than six years ago, an independent job evaluation report by the Pay Equity Commission showed that when compared with the male dominated job of corrections officer, education support workers employed by the Ministry of Education were paid as much as $8 an hour less. According to the union, the incoming government “sidelined the report,” saying the pay issue would be dealt with through bargaining rounds. “There has been no real movement, and in fact what we’re seeing across the workforce in New Zealand is growing inequity and female-dominated workforces are suffering the most,” Goulter said. The teachers’ union suit follows court action by the College of Midwives which is suing the government for paying its members less because it was a predominantly female industry. 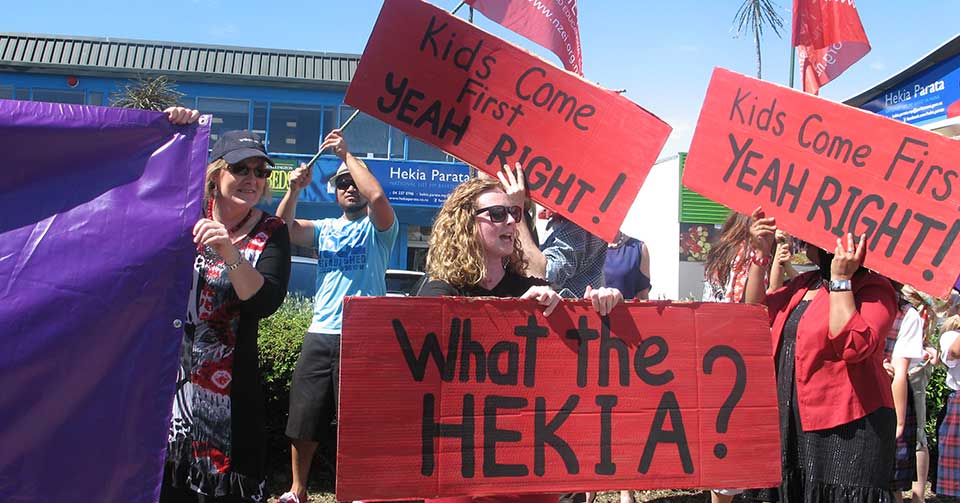 The Rail and Maritime Transport Union (RMTU) took a test case August 26 to the Employment Relations Authority (ERA) to determine whether Chinese engineers who are removing asbestos from KiwiRail locomotives are covered under New Zealand employment law, announced RMTU General Secretary Wayne Butson. The union brought the complex legal case in response to allegations of exploitation of the workers in 2014, including charges of minimum wage and holiday entitlement breaches. The Ministry of Business, Innovation and Employment determined New Zealand laws probably don’t apply to the China-based engineers. But the Workplace Relations Minister told the media the only way to confirm the legal position is in the courts, which the RMTU intends to do with this test case. “If our law doesn’t apply to foreign workers carrying out work on New Zealand soil, what’s stopping other companies from replacing their local workers with cheap labour from overseas,” asked Butson.

The Engineering, Printing and Manufacturing Union, with more than 30,000 members, and the Service and Food Workers Union, with more than 20,000 members, officially merged to become the second largest union in the country, after the Public Service Association. According to both unions, the new labour organization will be formally launched, with a new name and brand, on October 7 in Wellington. “This is a huge step forward for all working New Zealanders,” said Bill Newson, national secretary of the EPMU. “A strong union movement is the foundation for good wages, skills recognition, and decent working conditions. Too many Kiwis aren’t in a union and don’t see how they can get a better deal at work. We want to reach those workers and help them make a difference through collective bargaining.” John Ryall, national secretary of the SFWU, added, “The new union will be a force for change. It will be a diverse, active organisation, fighting for industrial gains and progressive causes and making a real difference in Kiwis’ lives. Together, we will campaign for the living wage, for strong health and safety laws, and for the rights of every worker to be treated with dignity and respect.”

Puketi Logging, employers of 19-year old forestry worker Eramiha Pairama, who was killed in 2013, were found guilty August 12 of a charge under the Health and Safety in Employment Act relating to his death, reported the Council of Trade Unions. The CTU undertook a private prosecution after the Ministry of Business, Innovation and Employment (MBIE) inspectors made the decision not to pursue the case. According to the CTU, the court held that Puketi Logging failed to take all practical steps to provide Eramiha with a safe working environment and particularly to ensure that he was not exposed to the dangers of the work he was being expected to manage on his own. CTU President Helen Kelly said "Eramiha should not have died at work. He was inadequately trained, unsupervised, and had not been provided with adequate safety briefings. He simply should not have been left to work alone that afternoon. He was killed in 2013 along with 10 other workers in the forestry sector.” She said the CTU needed to take action to “highlight the inadequacy by the Government to step up on health and safety and carry out its role as legislator and regulator.”

Wildcat strikes hit The Warehouse retail chain, with workers walking out at the chain's Manukau, Rotorua, Blenheim and New Lynn stores, according to news reports. Workers are members of First Union which said they are upset over wages. The union is claiming an hourly raise of at least 50c but the company is only offering 30-31c hourly. "The Warehouse is fast falling behind other large retail chains,” said union organiser Dennis Maga. He said another retail chain, Farmers, had raised its hourly pay rates by 70 to 80 cents. "If workers accept the offer of a 30 cent wage increase then that would only lift the lowest pay rate to $15.32 — nowhere near the levels needed to support a family in Auckland,” he said. The workforce is “overworked and underpaid," he added. First Union represents1,800 Warehouse staff.

More than a hundred members of the New Zealand Meatworkers Union employed by Affco staged a noisy protest September 9 against employment conditions at the company’s meat works. Union organiser/director Darien Fenton told the news media “the workers voicing their concerns are incredibly brave”, and she acknowledged their actions were “risky”. “The company wants them to sign non-union draconian documents to go back to work,” she explained. “Conditions are pretty grim. People can be put on any shift. The workers have no continuity of employment hours.” The protest was held on the first day of the new processing season at Wairoa’s Affco plant. About 250 workers at the meat plant have refused to sign contracts as a precondition to returning to work, after they voted to reject what they describe as “punitive individual employment agreements.” The union has been attempting to renegotiate a collective agreement that expired in December 2013 for eight North Island meat works.

Ministry for Women recently reported that 8,600 women are employed in construction in Canterbury compared to just 3,600 two years ago. There are 31,400 women employed in the trades nationally. According to the ministry, nearly 18 per cent of Canterbury's construction workers are female, compared with just over 14 per cent nationally. In addition, the number of women training in trades at Christchurch Polytechnic (CPIT) has jumped 800 per cent in four years, from just 50 in 2011 to 414 last year. Minister for Women Louise Upston said the report was aimed at boosting women's career choices and making better use of the female workforce. "These industries are likely to drive New Zealand's growth in the next five to 10 years, so it makes good business sense to attract women to trade industries," she said. "My message to employers is to consider all workers when they recruit for their industries."

The outlook for the country’s economy turned sour as the Reserve Bank of New Zealand cut rates at their September meeting, following successive cuts in June and July. The RBNZ estimates the economy will expand by around 2.1 per cent next year, down 0.9 percentage points compared with the June statement. “Domestically, the economy is adjusting to the sharp decline in export prices, and the consequent fall in the exchange rate,” RBNZ governor Graeme Wheeler said. “Activity has also slowed due to the plateauing of construction activity in Canterbury, and a weakening in business and consumer confidence.” Dairy prices have declined for 27 months and the bank is unsure whether prices reflect a cyclical trend or a long-term structural adjustment.

Organisers of an up-coming one-day forum on the Changing Face of the Workforce in Tauranga reported that keeping and hiring older workers is a “smart solution” for dealing with a projected skills shortage. "Although retirement-aged workers currently only make up 5 per cent of the workforce, they will comprise 13 per cent by 2036," said Adrienne von Tunzelmann, a national board member of Age Concern, which is co-hosting the forum with the Tauranga Chamber of Commerce and Priority One on September 21. As increasing number of baby boomers reach retirement age, the decreased labour supply is projected to also lead to a loss in skills and experience. "One of the most common ways of dealing with skills shortages is to encourage existing older workers to stay on past retirement age. This means considering more flexible working arrangements, ensuring jobs are restructured and designed to suit older workers, developing leadership strategies and succession planning," van Tunzelmann said.

The Seattle (Washington) Education Association led 5,000 teachers and support staff on strike September 9, the first day of school, over a contract dispute. The action closed the city’s 97 schools affecting 53,000 public school students. Within minutes of the strike announcement, the Seattle school board filed legal action to force teachers back to the classroom. Negotiations for a new contract began in May but stalled over "major unresolved issues,” the union said. As well as the levels of pay, they also listed staff evaluations and workload relief as outstanding issues. "Nobody really wants to strike, but at this point the school board has not come to the table with a serious proposal to get it done," said Phyllis Campano, the union's vice president. "The union voted to walk out if a tentative agreement wasn't reached by the first day of school." A labour action also is underway in Pasco in southeast Washington state where teachers voted not to return to the classroom despite a court order to end the strike. Around 17,000 students were left idle on Tuesday, as the educators voted Monday to remain on the picket line in a dispute over pay and the curriculum. 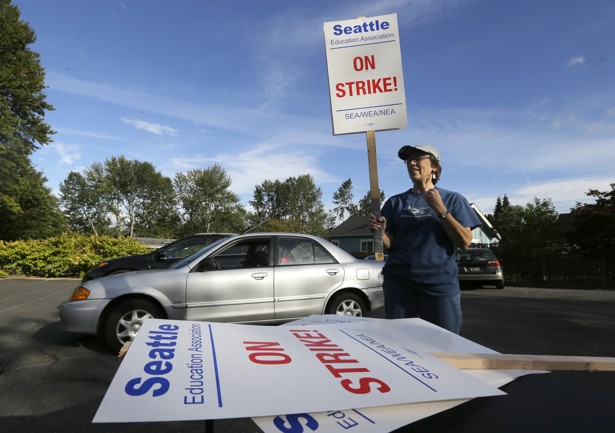 According to global news reports, more than 150 million Indian workers participated in a one-day national strike September 2 to protest the “pro-business” policies of the Narendra Modi-led BJP government. Most of the strikers work in banking, manufacturing, construction and coal mining industries and belong to 10 major unions. Public transportation was disrupted and a large number of schools and businesses were shut in what has been described as the largest strike in history. The unions are demanding the government drop plans to sell off stakes in state-run companies and change labour laws. Unions claim plans announced by Prime Minister Modi will deprive large segments of India’s workforce of labour law protection at the behest of local and foreign investors. International Trade Union Confederation General Secretary Sharan Burrow asserted the government’s proposals will widen India’s economic inequality and make it harder for workers to organize unions to advance their interests.

Tens of thousands of Korean workers at three of the nation’s nine shipbuilding companies, Daewoo Shipbuilding and Marine Engineering (DSME), Hyundai Heavy Industries and Samho Heavy Industries, launched a targeted strike September 10 over wage negotiations. Workers walked off the job each day for a week from 1-5 p.m. “If the managements don’t come up with a new [salary raise and job stability guarantee policy] plan soon, the association will hold another joint strike next Thursday [which is planned to be a longer partial strike jointly with Hyundai Motor union],” said representatives of the three striking companies’ unions. The association represents workers of all nine companies in the industry and is led by Hyundai Heavy Industries. The union claimed management is pushing a recovery plan relying on layoffs without input from the union.