Enclosed is the latest edition of your New Zealand Labour Letter. 2015 marks 20 years of AIL in New Zealand and we look forward to continuing to serve the labour community.

AIL sends our congratulations to the New Zealand Meat Workers Union which won a significant decision in Employment Court against AFFCO detailed in this month's newsletter. We also congratulate Richard Wagstaff for his election as head of the CTU and offer our best wishes to Helen Kelly who retired.

The NZ Meat Workers Union won an important decision November 17 in the bitter dispute with AFFCO, when the Employment Court held the lock out of AFFCO Wairoa meat workers was “unlawful.” The court said AFFCO failed to act in good faith towards the workers while collective bargaining was in still in progress. Meat Workers Union National Secretary Graham Cook called the decision a victory and a win for all Talley’s workers around the country. "They've forced some workers onto individual agreements, they've tried to undermine the union behind closed doors,” he said. Union lawyer Peter Cranney said the case has implications for all of AFFCO's eight plants in the North Island and that AFFCO was trying to undermine collective bargaining and the union. For eight weeks, 170 Wairoa freezing workers had refused to sign individual contracts when AFFCO, owned by Talley’s, walked away from collective bargaining. The court ordered both parties to return to mediation and postponed any remedies until the process was completed. 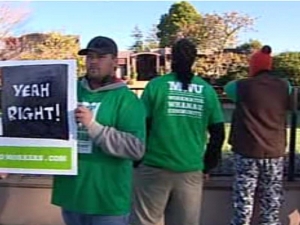 The Public Service Association (PSA) November 16 filed an historic case seeking equal pay for social work, “an occupation dominated by women and undervalued for years.” "Social workers in New Zealand are underpaid, and this can be attributed to the workforce being well over 70 per cent women. Social workers have a huge responsibility for the welfare of vulnerable children, but the workforce do not receive the pay they would if staff were predominantly men,” said Erin Polaczuk, PSA national secretary, in a statement. According to the union, the case is filed under the Equal Pay Act 1972. The union alleges social workers at Child, Youth and Family do not receive equal pay on the basis of gender and seeks a determination of what they should be paid. "Social Workers have been seeking equal pay for years and while their employer recognizes the role is highly demanding both emotionally and physically, equal pay has still not been achieved,” Polaczuk said. "We are hopeful that we will not need to pursue this case through the Courts and that the Government’s working group will deliver equal pay for Social Workers."

Newly elected head of the Council of Trade Unions, Richard Wagstaff in his acceptance speech last month called on New Zealand unions to “bring a stronger voice and stronger presence for working people in their workplace, their industry and within NZ society”. Wagstaff replaced Helen Kelly, CTU leader since 2007, who resigned for health reasons. “We have to organise and build our movement, and that will always be the highest priority,” he said. Wagstaff has served as national secretary of the Public Service Association since 2000. In tributes that followed her retirement, Kelly was described as tenacious, fearless, and one of the CTU’s finest leaders.

New Zealand Professional Firefighters Union praised the decision by the Government to merge rural and urban fire fighters. National secretary, Derek Best, said all fire crews needed to work more collaboratively and the change should have happened a long time ago. "The distinction between rural and urban is now well past it's use-by date," he said. "The vast majority of incidents in rural areas are no different to urban areas; they're structure fires, vehicle accidents and those sorts of things, so that distinction or that barrier needs to be broken down and I think [these changes] will do that." The change involves merging 53 organisations which had acted independently of each other. Fire Service national commander Paul Baxter said legislation will be introduced to Parliament next year and a new unified fire service should be in place by mid-2017. According to Baxter, a key component of the merger is the creation of regional committees to oversee each area.

Thousands of New Zealanders protested against the Trans-Pacific Partnership Agreement in cities nationwide November 14. “After six years of secrecy and government spin, we can now see what’s in the TPPA. Buried in over 6000 pages of legal text are obligations that no government should sign up to”, said spokesperson Barry Coates of It’s Our Future, a coalition of non-profit, union and other concerned groups. The full text of the agreement was released earlier this month and analysts are poring over the details. “It is already apparent that the government has used spin, exaggeration and misleading information to try to sell the TPPA. The benefits are far less than we have been led to believe, the costs have largely been ignored and the restrictions on the rights of future governments to act in the public interest are utterly unacceptable,” Coates commented. The terms of the deal were recently agreed upon by New Zealand and 11 other countries after five years of negotiations.

Unmet economic growth expectations resulted in New Zealand’s consumer confidence falling to its lowest level since 2013, according to Nielsen’s Global Consumer Confidence Index for the third quarter. One in four Kiwis say the economy is their biggest or second biggest concern over the next six months, compared to a year ago when only 1 in 7 shared this worry, the report found. “New Zealand has in recent times been held up as one of the strongest economies in the world post the Global Financial Crisis (GFC), however GDP growth expectations simply didn’t transpire and as a result, confidence has waned,” said Rob Clark, Nielsen Managing Director New Zealand. Clark said the economy tops seven other factors for concern which include health, job security and debt. Today, less than half of all New Zealanders are optimistic about their employment prospects for the next year, a reversal since 2014 when more half of those surveyed had high job hopes.

New Zealand’s unemployment rate is now worse than Australia’s. The Kiwi jobless rate is 6 per cent compared to Australia’s 5.9 per cent. “New Zealand has experienced a sustained period of economic growth that is now falling away. We should be doing much better than Australia. There is no way our unemployment rate should be higher than across the Tasman,” said Labour Finance spokesperson Grant Robertson. He said National has not been able to turn growth into jobs and the government is failing workers. “John Key and Bill English always blame overseas economic factors and turbulent times. But the GFC is over and other countries are doing much better. Britain, Australia and the US all have unemployment levels below 6 per cent and falling. New Zealand’s is forecast to top 7 per cent,” he said. He warned that “behind these figures are real people with families to support and ambitions to fulfil.”

Unions from around the world sent messages of solidarity to the people of France following the terrorist attacks on Friday, 13 November that killed 129 people and wounded at least 300 others. General Secretary Sharan Burrow grieved for the victims and praised the French people for their “extraordinary generosity and bravery” even as the attacks were still underway. “Democracy, dialogue and the universal values of human rights and freedoms must and will prevail over the brutality that was witnessed once again in Paris,” she said. Rosa Pavanelli, Public Service International General Secretary, said, “These attacks are meant to inspire fear and hatred, pushing towards a spiral of ever more violence. The perpetrators of these heinous crimes, and those who support them, have to be identified and brought to justice, but we must also tackle the root causes of this terror.”

Australia’s Brisbane teachers November 17 took historic industrial action in their campaign to protest the detention of an asylum-seeking high school student. In August, 21-year old asylum seeker Mojgan Shamsalipoor was months away from graduation at Yeronga State High School when she was forcibly taken to a Darwin detention centre after her application for student refugee status was rejected. Fifty teachers from the school, including principal Terry Heath, staged an afternoon strike to demand her release. "This is historic action," said teacher Jessica Walker, who is leading the campaign to free Shamsalipoor. "Teachers have taken industrial action because of human rights abuses for the first time. It's hugely significant and it's only the beginning." Ms Shamsalipoor arrived illegally in Australia by boat in 2012 after fleeing Iran to escape sexual abuse and an arranged marriage to a man in his 60s. She has since married fellow student Milad Jafari, also 21, and teachers ask that she be allowed to apply for a partner visa without the need to return to her native Iran.

Newly elected Canadian Prime Minister Justin Trudeau addressed a national meeting of more than 120 labour leaders from across the country in Ottawa on 10 November, signalling what they hope will be a new era of relations between the labour movement and the federal government. “We were happy to welcome the Prime Minister to our meeting, and to hear him recommit to repealing the former Conservative government’s anti-union legislation, C-377 and C-525,” said CLC President Hassan Yussuff. Union officials noted that Trudeau is the first sitting Prime Minister to address the Canadian Labour Congress in 50 years. The last was John Diefenbaker who spoke at the CLC’s 1958 convention. “We had a positive discussion and emphasized that we look forward to working with the Prime Minister and his cabinet on a number of issues that are priorities for working Canadians,” Yussuff added.

Tertiary Education Union branch president Sid Suhag Aksoy said staff were in “shock” after Unitec Institute of Technology in Auckland announced 300 staff could face job cuts over the next three years. "You look at the faces and it's really just shock and awe," he said. "It's unsettling to say the least, people are really devastated." With 1100 employees, Unitec is New Zealand’s largest polytechnic institute and Aksoy said the job losses are due to funding cuts by the Government. "I find it audacious," he said. "This has really been forced upon Unitec because they have been starved." About 60 of the workers are employed in student services which will be outsourced to a private, for-profit call centre, Concentrix. He said student numbers are being eaten away by a growing number of private training establishments (PTEs), which generally have lower per student costs and offer fewer student services. "The reality is that PTEs are cherry picking profitable courses while our local polytechs are left to clean up the mess,” he said.

About 30 workers from Bunnings Lyall Bay, Naenae and Porirua stores recently set an hour-long picket line at the Porirua store to protest a dispute about rostering. According to FIRST Union organiser Richie Morris, the union has been protesting at stores on weekends and briefly managed to close the New Lynn store last month when workers chained themselves to trolleys inside the store. He explained rosters are set on mutual agreement between managers and workers under the current collective agreement, but Bunnings is proposing changes that will allow management to unilaterally impose rosters. Management wants the power to chop and change workers’ shifts with just two weeks’ notice which would affect the time workers can spend with their families, Morris said. The dispute over roster changes at Bunnings’ stores has been on-going for several months. Bunnings has 327 hardware stores in Australia and New Zealand with earnings of more than one billion dollars.