The fact that half the prison population in New Zealand is Maori is simply a national scandal that must be ended.

Many Maori are in prison for being poor ie unable to pay fines the wealthy have no trouble paying or victims of laws that shouldn’t be there in the first place like those criminalising cannabis possession. 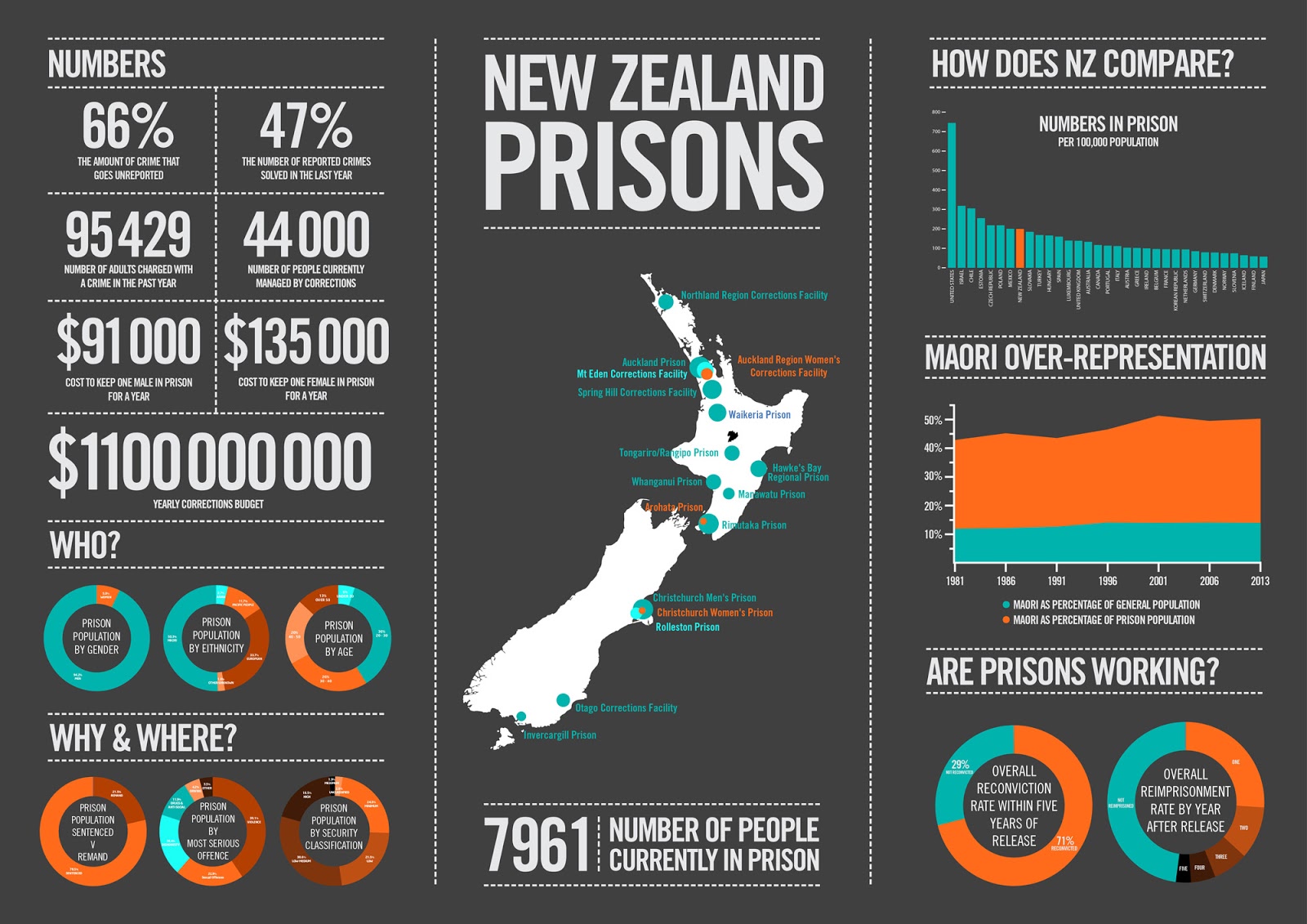 New Zealand’s imprisonment rate at around 150 per 100,000 is the second highest in the wealthy advanced capitalist world and is second only to the super-star of imprisonment – the United States. Both Labour and National governments have spent tax-payers money in an endless bidding war when it comes to “law and order” policies.

Prison sentences have become almost mandatory for many offenses, the length of imprisonment has got progressively longer, early release for good behaviour harder to get, without any evidence being provided that this made the community any safer.
It has been made increasingly more difficult to obtain release on bail when arrested and more difficult to get an early release to reward good behaviour.

There is almost no ability for prisoners to access mental health or addiction services in prison despite the admission from the chief executive of Corrections Ray Smith that of the roughly 20,000 people going through prison each year, approximately 91 percent of them have alcohol or drug addictions, or mental health issues over their lifetime. The number entering prison with those issues is 61 percent.

Everone knows that access to family, health services, education and training, decent jobs have the best impact on preventing reoffending so we seem to insist on creating a system of punishment that does the exact opposite.
There have been two recent surges in imprisonment numbers. The first was under the Labour-led government from 2002-2007 under the “tough on crime – tough on the causes of crime” Justice Minister Phil Goff. Goff led a rewrite of the law with the explicit purpose of increasing penalties and bail conditions. Briefing Papers warned that the changes would lead to an increase in the prison population and the need for more prisons.

Phil Goff was proud of his achievement as the following press release from March 2004 boasted that the numbers being imprisoned were increasing while crime rates were decreasing:

Tougher sentencing and parole laws enacted by the government in 2002 will see New Zealand’s prison population increase by over 20 percent in the next seven years, Justice Minister Phil Goff said today.

The Ministry of Justice’s Annual Update of Forecasts of the Prison Population, released today, predicts there will be around 7400 in jail in 2010, an increase of 1300 on the 6100 inmates in 2003.

“The forecast says the predicted increase in the prison population is a reflection of legislative changes and a series of initiatives undertaken by this government,” Mr Goff said.

“As intended, the Sentencing Act 2002 has resulted in longer sentences being imposed. At the same time, the Parole Act 2002 is expected to increase the proportion of sentences that inmates actually serve. Under the Bail Act 2000, more high-risk defendants are being denied bail.

“The projected increase in the prison population is not the result of increasing crime. It comes at a time when New Zealand’s crime rate, and total recorded crime, has dropped substantially from a peak in 1996. There has also been little change in the average seriousness of offences over that period, according to Ministry of Justice research,” Mr Goff said.

“A record number of police, and a of over $1 billion, has resulted in increased crime resolution rates again last year, and more people brought to court and sentenced for their crimes. The Government’s Crime Reduction Strategy and Methamphetamine Action Plan have also resulted in more people facing prosecution.

“The public referendum in 1999 showed New Zealanders wanted tougher measures taken against criminals, and the government has acted on that. These figures are the proof.

“The forecast confirms that since the Sentencing Act 2002 came into force, the average sentences have increased across the board. We have also abolished the nonsense of serious violent offenders being automatically released at two thirds of their sentence.

“New Zealand’s worst offenders are also now receiving the harshest sentences ever handed down. Already this year two double murderers, Joseph Samoa and William Johansson, have been given life sentences with minimum non-parole periods of 22 years and 23 years; while last year William Bell received 33 years’ non-parole for triple murder; and Bruce Howse was given 28 years’ non-parole for murdering his two stepchildren.

“Tougher sentencing comes at a high cost. Four new prisons under construction or planned will cost over $600 million in capital expenditure, with operating costs of over $120 million a year.

“It’s money ideally we’d much rather spend on areas like health and education. However, in the short term tougher sentencing is necessary to deal with serious recidivist offenders and to keep the community safe.

“Over the longer term, it will be measures to address the causes of crime, rather than simply prisons, which will bring down crime.

“Early intervention, which deals with anti-social behaviour at a young age, is ultimately a more effective and cheaper way of cut crime. Over the next two budgets the Government will be increasing its efforts in this area,” Mr Goff said.

The second surge in prison numbers came in 2015 after National reformed the bail laws. Again Labour endorsed the bail law changes. The Bail Amendment Bill passed into law by 102 votes to 19. It was opposed by the Greens, the Maori Party, Mana and Brendan Horan.

It was claimed the change would make the laws fairer and only increase the number in prison by 50 or so. The actual increase was 1500 over the next two years. Again Maori were the big majority detained without bail. And one of the main reasons for being denied bail was not the nature of the offense but because they did not have accommodation outside of jail that was deemed “suitable”. Being poor becomes a crime in itself.

National has also imposed so-called “double-bunking” to slow the prison building cost – at the price of degrading and violence-prone overcrowding.

The Corrections Department is predicting the prison numbers to continue increasing to 12,000 by 2026 if there is no change in policy. A new 2000 bed prison is set for sign-off in April this year.

The so-called free-market extremism carried out in New Zealand under the term “neo-liberalism” was also accompanied by a cruel and callous promotion of an attitude that “failures” should be abandoned to their fate. Failures were deemed to be anyone who lost their job, got into trouble with the law for using recreation drugs, had a baby without a proper partner. Academic literature actually shows that the greater inequality in a society the greater overall level of punishment is.

The new government has signaled that it wants to “have a dialogue” about the high imprisonment rates. But it has a duty to simply reject the new prison as being a product of all that has been wrong in this area for decades. The billions it will cost will be better spent anywhere else.

The union movement needs to take a lead on this issue. What Maori face is in many ways what all working-class people face from this system with an added twist of the knife.

It is time for people to simply say: No more prisons – find another way!