A budget analysis by the Council of Trade Unions (CTU) showed the Health Budget shortfall to be $215m nationwide, declared the New Zealand Nurses Organisation (NZNO)."Health workforce training, contracted services, maternity services and public health service funding alone is short $36m. Inadequate funding for preventative health care and community nursing results in more people going to the hospitals, which is not the way to keep New Zealanders well, or the best use of public funds," said NZNO Chief Executive Memo Musa and President Grant Brookes. Brookes warned the "lack of investment" in the workforce could be the tipping point that forced many in the "aging nurse workforce" to retire or quit. "New Zealand is facing new public health threats because of the increased movement of people, animals and food around the world, and this, combined with environmental effects of climate change, mean the public health budget must incorporate funds for these contingencies," he said. 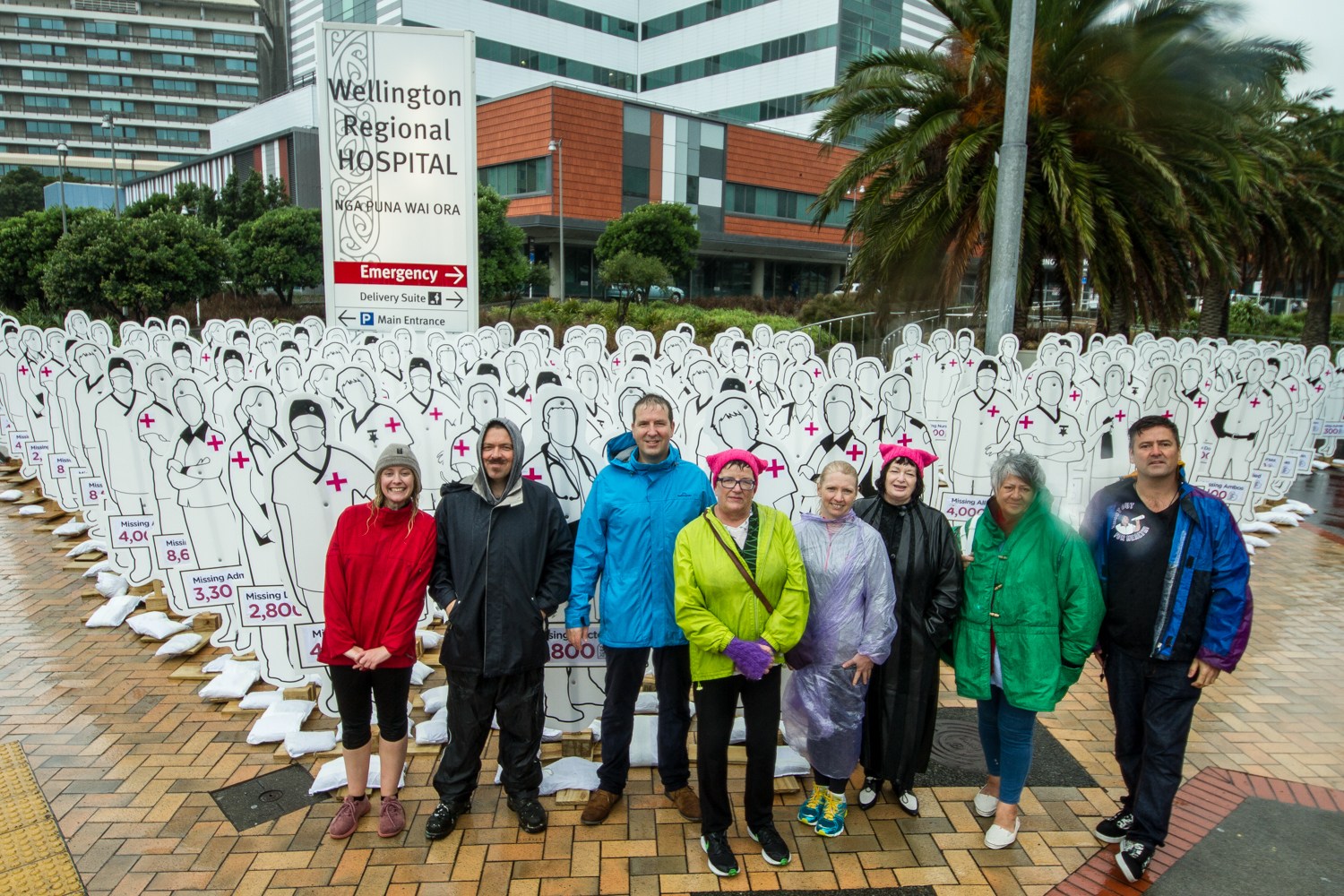 Association of Professional and Executive Employees (APEX) and the New Zealand Medical Laboratory Workers' Union (NZMLWU) confirmed their amalgamation into a single union. The merger was approved by the Executive Committees of both unions and confirmed during their July 3 meeting, following the completion of due diligence processes. APEX National President, Peter Gene and NZMLWU National President, Stewart Smith, said, "This is an exciting time for both APEX and NZMLWU. Whilst we have always had a close relationship, the amalgamation cements APEX's position as the specialist allied, scientific and technical union in NZ, bringing our membership to over 4000 strong." NZMLWU will become the Medical Laboratory Workers division of APEX. Earlier in the year, the NZMLWU membership voted overwhelmingly in favour of the amalgamation. A wide-range of medical occupations are represented by the union which include Anaesthetic Technicians, Audiologists, Biomedical Engineers and other skilled and technical jobs.

E tū union won a landmark contract against "sunshine wages" in a new deal for New Zealand King Salmon workers in Nelson that will increase wages for the lowest-paid workers by more than 10 per cent. The union said the settlement is a "big step" towards securing a living wage for all people working for so-called "sunshine wages" in the Nelson region. The agreement includes a series of pay rises for all King Salmon workers over three years and by April 2019 the lowest-paid workers will have received a 10.33 per cent increase. The increase is almost a $2 hourly hike on their lower level current rates. "People in Nelson are sick of this idea that pay is low in Nelson because you have lots of sunshine, so you get sunshine wages They want living wages. This King Salmon settlement is a big step towards that goal," said E tū food sector industry coordinator Chas Muir. He said the contract is a "great deal for these workers and puts to rest the nonsense of 'sunshine wage.'"

New Zealand's unions praised the new workplace relations policy recently announced by the Labour Party. Leader Andrew Little and the party's workplace relations spokesman Iain Lees-Galloway said the new policies are aimed to stop "a race to the bottom" seen in some industries where good employers are undercut by "bad employers trying to drive down wages." Among other issues, the package includes measures to set fair employment conditions across industries, lift in the minimum wage from $15.75 to $16.50 and base future rises on the cost of living for people on low incomes and double the number of Labour Inspectors. In addition, the 90-day employment trial period would be strengthened to include protection against unjustified dismissal and a "referee" service to resolve disputes. "These policies would finally restore fairness to the bargaining process between unions and employers," said Kerry Davies, Public Service Association acting national secretary. Council of Trade Unions President Richard Wagstaff added, "We are excited to see Labour's commitment to introduce Fair Pay Agreements which would set basic employment conditions across an industry."

The shortage of construction workers is a "significant problem for the industry" and could last several more years, said a leading construction training group. According to the Building and Construction Industry Training Organisation, a record number of people are in apprenticeships, but tens of thousands more are needed over the coming years. Chief executive Warwick Quinn said the country faces a construction skills shortage and the industry desperately needs more trained workers. An estimated 11,000 people are working for their building trades qualifications, a number that is still not enough. Quinn said an expected 65,000 new workers were needed over the next five years to meet demand and replace those who retire or leave. "We expect this current pressure to continue into the 2020s... forecasts for the next few years provide confidence for people considering a career in the construction industry and for business owners thinking about expanding their business and taking on more staff," he said. The construction sector has experienced a slowdown in projects because of the skilled staff shortage.

New Zealand's chief science advisor urged the government to continue using data and evidence to design its policies, in contrast to U.S. President Donald Trump's complaint about "fake news" when he disagrees with scientific evidence. Sir Peter Gluckman acknowledged that political pressure including the spread of false information can influence government policy. But he called on the government to continue working closely with the scientific community to use "robust evidential approaches" to inform decision making. "The worrisome rise of post-truth polemic and the greater and easier promulgation of false news that we have seen globally in recent times are threats to the democratic process, social cohesion and good governance," he said. Gluckman noted New Zealand had made notable strides in recent years in bringing scientific experts and public servants closer together. "I believe that a commitment to protect and enhance the evidential input into the policy process is an increasingly important defence against these trends," he said.

Thousands of Australian workers at Glencore's Hunter Valley, New South Wales (NSW), mining operations voted to maintain their campaign of rolling strikes after negotiations for new employment agreements continue to stall. Represented by the Construction, Forestry, Mining and Energy Union (CFMEU), the miners' job actions represent some of the biggest industrial actions on the coalfields in years. The job actions affected 12 sites while miners at Glencore's Oaky North mine have been on strike since May. "We're currently in bargaining at seven of the Glencore operations. Some of those agreements expired as far back as July 2012," said CFMEU district president Peter Jordan. "Workers have become very concerned and frustrated over the progress of negotiations." He said miners are anxious about the company's use of casual contract labour, which in some locations is as "high as 50 per cent." He said miners also want to improve their redundancy pay. "These mine workers work seven-day rostered 12-hour shifts, and in the event that they're made redundant, they're made redundant back at a Monday to Friday 35-hour rate," Jordan said. "No mine worker works 35 hours, they're working around 44 hours plus."

Ivanka Trump-brand shoes, which retail for about $80 in the USA, are made by exploited workers in China, declared China Labour Watch, a highly respected NGO that monitors labour conditions in China. Their reports are used to investigate violations in global supply chains. According to China Labour Watch, many of the shoes are manufactured at giant Huajian factories in Dongguan and Jiangxi where hundreds of shoe workers are paid about $1 an hour for work days which often extend to 15 hours. They have one or two days off per month and receive no overtime pay. Management also routinely alters pay slips to indicate higher wages than received. Any worker taking a leave day may find their wages docked or a fine imposed. Other shoes also are made in these factories, but the Ivanka Trump label is high profile because her father, U.S. President Trump, accused China of stealing American jobs. According to China Labour Watch, none of the brand retailers, including Ivanka Trump, responded when asked to intervene to correct abusive labour conditions at their Huajian supplier factories.

The biennial conference of the Irish Congress of Trade Unions in Belfast warned that any agreement reached on Brexit must recognise human rights and protections that underpinned the constitutional settlement on the island of Ireland. Unions also pledged to oppose any move by employers to use technological advances in robotics, automation and artificial intelligence as tools to exploit workers. In addition, government plans to restrict the right to strike in some essential services, as recently proposed by Taoiseach Leo Varadkar, would face union opposition. In an address to the conference, ICTU general secretary Patricia King outlined many of the challenges confronting Irish workers. She warned unions to be vigilant concerning technological advances in the "gig economy." "It is vital that all steps are taken to ensure that this technology transition is managed in a just and equal manner and not allowed to be used as a tool for worker exploitation," she said. King also declared that "Brexit must not be used as a pretext to dismantle hard-won workers' rights and protections and to drive down employment standards."

Workers at New Zealand's largest transformer company, Etel Limited in Auckland, took strike action June 16-17 to protest the company's low pay offer in recent negotiations. E tū, which represents the manufacturing firm's 180 workers, has been in talks for a new collective agreement for six months. E tū organiser, Dayna Townsend pointed out Etel, which manufactures power transformers, is owned by power company, Unison which last year made a profit of $24.6 million. "We've been in negotiations for six months and all Etel will offer is an extra 40 cents on these extremely low wages and people are fed up. They can't live on what they earn and they've had enough," said Townsend in a union statement. She said most members earn between $17 and $18.80 an hour. "Many can't make it from pay day to pay day. Some of them do two jobs and even three - and that's not just one or two. They work at night and their wives are working during the day so they never see each other. They don't see their kids." She said workers are seeking the Living Wage of $20.20 which the company has refused to consider, and a skills-based pay scale which the company also has refused to put into the agreement.

A company that is part of the Talley's group has been fined $28,000 for assaulting and unlawfully preventing a Meat Workers Union organiser from recruiting union members, the union announced in a statement July 10. The Employment Authority found that South Pacific Meats Ltd, which operates a meat processing plant near Burnham, south of Christchurch, breached the Employment Relations Act provisions on union access when a pre-arranged union visit to the site by was cut short. "No employer is above the law and unions have a statutory right to visit work sites. We will keep doing our job of working for worker's rights at SPM and in the wider Talley's group. Workers know that we are on their side," said NZMWU National Secretary Graham Cooke. According to the union, NZMWU Canterbury branch organiser Wayne Ruscoe was assaulted by a staff member to prevent him from going into a smoke room to talk to workers. SPM also issued a trespass order against Ruscoe to prevent further union access which the ERA decision rendered null and void. South Pacific Meats was ordered to allow the Meat Workers Union back on site. The ERA imposed two fines of $28,000 which must be paid to the union. The union said Talley's SPM has been fined over $150,000 in recent years for more than 20 earlier union access breaches at their meat processing plants in Canterbury and Southland.