Like the rest of the nation, New Zealand’s unions were surprised by the resignation of Labour Party Leader Andrew Little but welcomed the new leadership of 37-year old Jacinda Ardern, the youngest person ever elected party head. E tū, the largest private sector union in New Zealand and the largest union affiliated to the Labour Party, praised Little and expressed the union’s “proud” support of the new leadership team. “We know Jacinda as someone with great values, commitment and energy. Our members were excited by her during the Mount Albert by-election. Her track record within the party of connecting with people and bringing people together are just some of her great leadership attributes,” said E tū National Secretary Bill Newson. The Meat Workers Union (MWU) also applauded Little’s years of service and pledged the union’s support to the party. "Jacinda has a great record with Meat Workers Union members. She gathered up Xmas presents from other Labour caucus members for locked out workers and then drove all the way to Wairoa to deliver them, ensuring the kids of Wairoa AFFCO MWU members had a better Xmas,” said MWU National Secretary Graham Cooke. 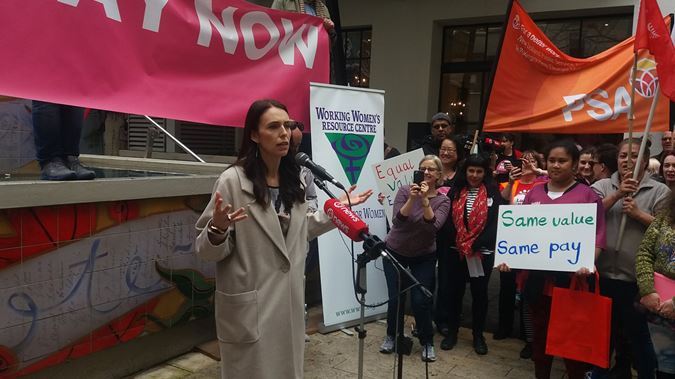 “Too many people are still unemployed and looking for more work – and nothing has been done about it,” declared Council of Trades Union President Richard Wagstaff despite the recent report by Statistics New Zealand that the jobless rate in June was 4.8 per cent, the lowest in more than 9 years. “A decade ago we had many fewer people unemployed, 3.3 per cent of the labour force. Nine years of a National Government has seen policies introduced and decisions made which have resulted in many more Kiwis unable to find work,” he countered. Wagstaff declared that there would be 40,000 fewer people “suffering the indignity of unemployment” if the rate was at the level of 2007. He blamed the National Government “which has no idea of how to get us back to where we were a decade ago.” He called attention to real pay rates which continue to fall behind the cost of living and charged that “any gains aren’t being shared fairly by working people.” Employment laws, he also asserted, are weighed “heavily” against working people. “Working Kiwis are putting in a big effort, working longer hours under increasing stress and should be fairly rewarded for their effort. That’s not happening and we need new ideas because this has become the new normal under this National Government,” Wagstaff said.

As the country prepared for the General Election, New Zealand’s unions joined a coalition of action groups which has called on the country’s politicians to deal with income inequality. The Equality Network is comprised of 37 social service, church, advocacy organizations and unions which is pushing for a fairer distribution of income and better quality of life for New Zealanders. In a pre-election statement, the Network called for a living wage and improved income support, government-funded house building programme; and higher tax rates on higher income levels “to ensure that everyone contributes their fair share and enables our families … to thrive.” “These key ideas, if enacted immediately, will help create a more equal New Zealand, one where everyone can pursue their dreams, a country where everyone has the resources they need to build a good life for their families and [community], where income and wealth reflect fairness and balance,” EN representatives said.

With just weeks remaining before the General Election, Labours’ new leader Jacinda Ardern sparked renewed energy into the party’s campaign. Labour's General Secretary Andrew Kirton reported $250,000 dollars in campaign donations “flooded in overnight” and 100 new volunteers were recruited. "I've never seen anything remotely like this," he said. Analysts said Ardern could be a “game changer” in an election that was thought to be a “slam dunk” for the National Party. "I think one of the issues that we have faced as Opposition is, of course, from Opposition it is our role to highlight the things that are going wrong, but New Zealand is a relentlessly positive country," Ardern told the news media. "I believe New Zealand can be better than it already is." Labour leader Andrew Little resigned over “disturbing” opinion poll results which revealed support levels for Labour were at their lowest levels in more than two decades. Ardern, a member of parliament since 2008, has strong relationships with the unions. She said her focus would be on inequality and “a fresh approach.”

Every time Kiwis tilt a glass of beer, they are making “a massive contribution” to the nation’s economy, said Brewers Association chief executive Brett Heffernan. “Last year, the government collected $290 million in excise tax and a further $290 million of GST through beer sales," he said. Even more important, the Brewers Association reported that the industry generates $2.2 billion in economic activity. According to Heffernan, the industry directly employs about 1,880 people and supports $1.3b in on-licence industry (bars, restaurants) and $880m in off-licence (supermarkets, bottle shops)."New Zealand is blessed with perfect conditions for making and enjoying world-class beers," he said. He also reported New Zealand has gone through a craft-beer boom over the last decade reflected in an 85 per cent increase in new varieties produced by brewers since 2012. "New Zealanders have come a long way since the days of the 6 o'clock swill of the mid-1970s," Heffernan said. "Today's beer drinkers are more discerning, better informed and socially equipped regarding responsible alcohol consumption than ever before."

Think traffic is getting worse around Auckland? If so, you are right and it’s costing the city billions of dollars. The congestion around Auckland probably wipes about $2 billion from annual Auckland gross domestic product and that decongestion could create a $1.3b annual economic benefit for the city, said a recent study by the New Zealand Institute of Economic Research (NZIER). Auckland, in fact, is more congested than Hong Kong. Commissioned by the Employers and Manufacturers Association (EMA), the report shows the need for a “fundamental change” in how the city plans, said EMA chief executive Kim Campbell. The report doesn’t offer solutions, but Campbell said, “nothing gets done” because of delays. He said the recently opened Waterview tunnel “was over 20 years in the making” and was the finish of a road planned in 1956. Stephen Sellwood, head of Infrastructure New Zealand, called for massive public transportation investment. He called for building affordable housing intensively near new public rail and other public transport services and using the residential land value uplift to help pay for ongoing investment.

Waterfront peace on the U.S. West Coast has been assured through July 1, 2022 after members of the International Longshore and Warehouse Union approved a three-year extension to their five-year contract with the Pacific Maritime Association, the first contract extension of its kind in union history. “There was no shortage of differing views during the year-long debate leading up to this vote, and members didn’t take this step lightly,” said ILWU International President Robert McEllrath in a statement. The pact covers some 20,000 full-time and part-time ILWU employees who work at 29 ports from California to Washington State. The management group, which represents the port terminal operators and shipping lines that hire the longshore workers, proposed talks on the contract extension after West Coast ports were crippled with a labour slowdown and a chassis shortage during the 2015/2016 holiday season, which accounts for 20 per cent to 30 per cent of retailers’ annual sales. Under the extended contract, workers will see a 3.1 per cent per year wage increase from 2019 to 2022, taking their base rate of pay from $42.18 an hour to $46.23 by 2022.

The effect of the Brexit vote is finally being felt in Britain’s manufacturing sector which “ought to be ringing alarm bells across government,” warned Unite, the country’s biggest manufacturing union. According to recent data, 14 per cent fewer vehicles were produced in the UK this year compared to the same period in 2016, said Unite assistant general secretary for manufacturing Tony Burke. “The Brexit effect is now real and is biting into an important UK manufacturing sector, our world-class car industry. Government must hear the alarm bells ringing and take action.” Burke said consumers are not buying cars because of the current “massive economic uncertainty” and the industry is not investing out of concern that trading agreements will remain “friction-free.” “The auto sector, in common with our other superb high-tech industries, is built on a complex supply chain. Any interruption to that and jobs and skills are at threat. So, we urge the government to give our industry and this workforce a chance. Stop ruling out single market access and a customs union because this is destroying investor confidence,” he pleaded.

Sir Lanka government July 28 moved to break an indefinite strike by workers at the state oil company, Ceylon Petroleum Corporation. Hundreds of oil workers went on strike July 25 to protest the government’s decision to sell off stakes in the state-owned storage depots to India and China. CPC trade unions said they will not return to work until the government abandons plans to sell stakes in oil storage tank facilities in the northeast and south of the island. Police reported they arrested 20 workers who defied a ban on strikes in the energy sector issued by President Maithripala Sirisen. Fears of a fuel crisis spread across the island because of the strike and long lines of cars and trucks developed outside petrol stations in the country. Among other deals, the government wants to form a partnership with a Chinese company to develop the loss-making Hambantota port, including its oil storage tanks, in the island's south. The $1.12 billion deal to sell the majority stake in the port to Beijing's state-owned China Merchants Port Holdings was announced on the day of the strike.

E tū pledged to stand by workers in the aftermath of the closure of Prices Foundry in Thames. E tū Organiser, Myles Leeson said the union’s priority is the welfare and support of the workers. “Prices is a long-standing business in Thames. It’s one of the town’s primary employers and this will hit our members and the town hard. These are good quality jobs and new jobs will be hard to find. There will be many households in Thames today where people will be worried about their future,” he said. The union reported the workers were called into a meeting where they were told the company had gone into voluntary liquidation and would close. Myles said the union was not informed about the closure and there are many unanswered questions. “Something significant has happened but why have they kept it quiet for so long? Workers will want to know what’s cost them their jobs,” he said. The union will work with the liquidators to ensure workers are treated fairly and receive their wages and entitlements.

A recent survey by the NZ Educational Institute found that two-thirds of Auckland's new teachers plan to leave the city, and many female teachers are postponing parenthood because of the city's housing costs. The union surveyed 450 new teachers and discovered an exodus in the making of young teachers from Auckland, including 94 per cent of male teachers under 35. According to the survey results, 40 per cent of female teachers under 30 are deferring having their own children due to Auckland’s high cost of living and 64 per cent of all new teachers believe they will never own a home. The survey results reflected what Auckland Primary Principals Association head Kevin Bush described as the worst teacher shortage he has seen in 30 years. The association reported that more than half of schools surveyed had three to four teacher vacancies for the third term which began July 24.