The Maritime Union urged Indonesia to crack down on abuse of its migrant fishery workers on boats owned by Korean and Taiwanese companies. Spokesman Victor Billot said the Indonesian government should clamp down on rogue recruitment agencies which he said were selling workers into slavery. "Unless there is some action on the other end of it, with Indonesia and all these [other] trading partners, we're still going to see those problems. We're still going to see people treated as sub-human,” he said. The Indonesian government recently reported that up to 61,000 Indonesians have been treated as “slaves” on foreign fishing vessels operating in New Zealand waters. A new law, supported by the Maritime Union, goes into effect in May 2016 which requires foreign-owned boats to be registered in New Zealand and comply with local labour laws. Billot also said the New Zealand government needs to put more resources into inspections and enforcement when the vessels came into port. "Really, we should be looking at 'New Zealandising' the fishing industry and ensuring that New Zealand workers — not just New Zealand flagged vessels — have got a chance to work in that industry on New Zealand rates of pay and conditions,” he said.

Many public workers are struggling to get any pay increase, which is reflected in the high number of industrial actions this year, said the Public Service Association. The union reported that public servant pay increases averaged 0.9 per cent, which National Secretary Glenn Barclay called “pathetic.” He said the Government is focused on achieving a surplus at the expense of staff, which has been forced to accept “virtually static pay.” "In the last five and half years, private sector workers have seen their pay grow 40 per cent faster than those in the public service. Is it any wonder that while retention is increasing, still only a quarter of new graduates remain in the public service after five years? Women in the public service are particularly poorly served, still being paid on average 14 per cent less than their poorly paid male colleagues,” he said. The State Services Commission, meanwhile, reported that the median increase during the 2014/15 year for public service chief executives averaged 1.7 per cent. The SSC annual breakdown showed there are 11 state sector and public service chief executives in the $600,000-plus band.

In an effort to speed an end to the dispute involving some Wairoa meatworkers, New Zealand Meatworkers Union asked the Employment Relations Authority to rule over the employment contracts dispute with Affco. “We are seeking unprecedented judicial intervention in the ongoing dispute and cite serious and sustained actions that have made it impossible for the workers to achieve a fair outcome,” said meatworkers union national secretary Graham Cooke. The MWU also alleged that the company was behaving “viciously” towards workers since the judge’s ruling. “I have never seen such vicious retribution against the New Zealand Meat Workers Union, its members, whanau and communities,” Cooke said. According to the union, about 100 workers have refused to sign individual contracts with Affco Wairoa’s owners Talleys. On November 18, the Employment Court ruled that the company had unlawfully “locked them out” in the dispute. “Our major concern is for workers and their whanau. With Christmas coming up there needs to be an urgent resolution to this untenable position,” said Cooke. 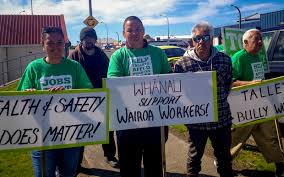 Bunnings Mount Manganui workers walked off the job November 28 for the fifth time over "unfair" and "insecure" hours of work proposed by the company. Workers feel frustrated with the employer’s rosters, explained First Union Bay of Plenty organiser Kirstin Miller. "We just want these guys to have security of hours," Miller said. "Bunnings is insisting on locking workers into rolling rosters.” She added that rosters are not set with mutual agreement, but Bunnings wants the power to unilaterally impose rosters whether workers agree or not. “Rosters by mutual agreement allow fair give and take on both sides. But giving bosses the power to just impose rosters isn’t fair” said Miller. First Union delegate Dennis Radovanovich, who has worked at the Bunnings store for 10 years, said the workers were happy with their current contract and the changes were, in his opinion, unnecessary. "It's a totally unreasonable contract,” he said.

Thousands of New Zealanders marched in towns and cities across the nation calling for strict limits on fossil fuel emissions ahead of the recent UN Climate Summit in Paris. The demonstrations were part of a global initiative called the People’s Climate March. Thirty-five separate events were held in New Zealand. “Leadership on climate change can be good for us all. It can change how the economy works; encourage people to make better investment decisions that also address issues like inequality, and allow a future for our kids that is one we would all hope for,” said former Council of Trade Unions President Helen Kelly. News reports said the event was supported by a broad coalition of organisations that includes church groups, unions, and environmental organisations. Similar protests were held in Australia, Philippines and elsewhere around the world. "Instead of seizing the opportunities from moving to a low-carbon future, the New Zealand government is lagging behind its people and the world by taking a weak target to Paris and refusing to take real action on climate change," said Auckland march convenor Kristin Gilles.

New Zealand High Court declined to review the decision by Worksafe to not prosecute former Pike River Mine head Peter Whittall. He had faced 12 health and safety charges relating to the deaths of 29 men after a series of explosions at the West Coast coal mine five years ago. “The CTU supported the Pike families who sought to pursue justice. We are now considering appealing this decision,” said Council of Trade Unions President Richard Wagstaff. Worksafe dropped the prosecution after an insurance payment of more than $3 million was made to the families of the men who died. “If this is the law in New Zealand then the law needs to change. Justice is not justice if it can be bought,” he said. On November 19, 2010, an explosion ripped through the Pike River Coal mine on the west coast of New Zealand’s South Island, killing 29 men. A second explosion occurred on November 24 which ended any possibility of saving survivors. The Engineering, Printing and Manufacturing Union (EPMU) had 71 members at Pike River.

The Government is under-funding Pharmac and denying New Zealand's ground-breaking cancer drugs, Labour leader Andrew Little charged. He said the budget for the drug-buying agency has increased by only two per cent over the past four years, while population growth and inflation mean it should have had a 10 per cent increase over that time. "That's why Kiwis dying from melanoma are unable to access ground-breaking new drugs like Keytruda which is fully funded in Australia and Great Britain," he said. Health Minister Jonathan Coleman said Pharmac has given Keytruda a low priority for funding, but Prime Minister John Key indicated the government may increase funding for the drug. According to news reports, Dr Coleman said that have not been any discussions about funding Keytruda ahead of next year's budget.

Thousands of protesters walked off their jobs and participated in rallies in central Athens and other cities across the country December 7 against new austerity measures proposed in Greece’s bailout plan. The actions were called by ADEDY and GSEE, the largest unions representing public and private sector employees. The austerity plan includes privatization of the ports, reducing pensions and raising the national retirement age. "When there's a crisis and you raise contributions, it's very hard for businesses because the turnover is not high and the profit is not enough,” the unions said. According to news reports, the strikes paralyzed public services like trains and ferries to Greek islands, leaving hospitals to run on emergency staff, and even cancelled trials as lawyers joined the action. A similar general strike was held November 12 in response to the European Union bailout and accompanying tax hikes.

Tens of thousands of protesters in South Korea held a mass rally in Seoul to protest government policies they say weaken democracy. News reports said the demonstrators oppose plans by President Park Geun-hye's conservative government to dismiss workers based on performance and to place a ceiling on the salaries of senior employees to encourage employers to recruit younger people and reduce youth unemployment. President Park, the country's first female president, was elected two years ago. Han Sang-gyun, head of the militant Korean Confederation of Trade Unions (KCTU), took sanctuary in a Buddhist temple in Seoul following the demonstration after an arrest warrant was issued against him. Sang-gyun repeated a call for a general strike against "labour conditions that only fatten capitalists."

A majority of workers at the Trump International Hotel in Las Vegas voted December 5 to be represented by the Culinary Workers Union Local 226 and the Bartenders Union Local 165 of UNITE HERE. The union’s bargaining units include more than 500 employees. The luxury non-gaming hotel is co-owned by businessman and leading Republican presidential candidate Donald Trump and casino owner Phillip Ruffin. The union victory comes nine months after workers at the Trump International Hotel Toronto voted to join UNITE HERE, and one week after the Trump Toronto workers ratified their first contract. “Trump Las Vegas workers have spoken loud and clear: They want respect, dignity, and the Las Vegas union standard,” said Geoconda Arguello-Kline, Secretary-Treasurer of the Culinary Union. ”Trump Las Vegas should recognize the workers’ vote immediately and sit down with us to negotiate a contract as soon as possible.” Culinary Workers Local 226 and Bartenders Local 165, Nevada affiliates of UNITE HERE, represent more than 57,000 workers in Las Vegas and Reno, including most casino resorts on the Las Vegas Strip.