Below is the latest edition of the New Zealand Labour Letter.

We urge you to make your voice heard in support of Talley/AFFCO workers by going to this website today, http://www.jobsthatcount.org.nz.

“Bill English and his Government are so focused on reducing government expenditure that they have lost sight of the increasingly urgent need to make improvements to working people’s lives now. Housing, health, education and many other parts of our lives need Government action,” said Council of Trade Union President Richard Wagstaff after the Minister of Finance delivered the National Government’s 8th consecutive Budget. He said working people are “underwhelmed and disappointed.” Wagstaff called the budget “a lost opportunity to invest in our long-term future.” The CTU’s budget analysis took aim at health care which has $300 million less in real terms over the next year than it had last year. On education, $43 million has been put into a “social investment” experiment to target funding to “at risk” students. “Our concern is that the result of this funding cut is that students just off the ‘at risk’ designation will pay the price,” the CTU said. 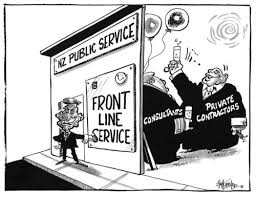 Primary Industries Minister Nathan Guy has “his head in the sand” over allegations about the industry's under-reporting fish catch, said Maritime Union of New Zealand's national secretary Joe Fleetwood. According to an academic paper put together by several universities, commercial fishing companies are grossly under-reporting their catch. The report claimed that the amount of fish caught is almost three times what's recorded. "It's happening. You've got all these universities that are doing all these major studies — they just didn't do it overnight, they've been doing it for many, many years. They deliver the reports and it falls upon deaf ears and it's 'oh you can't be right'. But that's what's happening out there," said Fleetwood. He called for CCTV cameras to operate on board commercial fishing boats to ensure fishermen are not under pressure to cut corners. "Private quarters and those things, no way, shouldn't be used. But out on deck, while it's a big problem, and it is a problem, that would be ideal," he said.

New Zealand’s unions called on the government to pay back workers who have been short-changed on holiday pay. The government recently reported payroll errors were revealed after a problem with Holidays Act compliance was discovered in some government agencies. According to recent documents, the Ministry of Business, Innovation Employment (MBIE) in 2014 estimated the total cost of lost wages around the country could top $2 billion, and affect up to 760,000 employees. Government spokespersons said the full extent of the problem will not be known for several more months. The Council of Trade Unions (CTU) urged the government to make sure that workers are paid back the monies they are owed. "What's the system to make sure we go through and systematically work with all those companies to work out where the problems lie and make sure workers are getting their back pay and their rightful entitlements,” said CTU secretary Sam Huggard. He noted the calculations in the Holidays Act “aren't particularly complex."

New Zealand's Labour and Greens parties signed an historic memorandum of understanding May 31 to “work together in good faith” towards defeating the National party in the run up to the 2017 election. The pact is the first formal agreement of any kind between the two parties. But it only pledges them to work together until the next election and is not a formal coalition. “It is our intent to build on this agreement to offer New Zealanders the basis of a stable, credible and progressive alternative government at the 2017 General Election,” said Labour leader Andrew Little in a statement. “When Labour and the Greens have actively cooperated and campaigned together, New Zealanders did perceive our parties as a credible alternative to National,” said Green Party Co-leader Metiria Turei. The 2017 election must be held sometime before November next year. The National party, led by John Key, has been in government since 2008.

The average pay received by the chiefs of publicly-listed firms surged 12 per cent in 2015 to $1.68 million, more than three times the rate of workers’ wages last year, the latest New Zealand Herald executive pay survey revealed. The increase is up from $1.5 million paid to these same chief executives in 2014 and the second straight year they enjoyed double-digit pay bumps. According to the Herald, in June 2015, the average amount earned each week by full-time workers was up 3.2 per cent from the previous year. Council of Trade Unions policy director, Bill Rosenberg said that if chief executives are getting pay increases of 12 per cent, their workers should too because “increases in profit of a company are entirely dependent on the people who work there." The highest paid chief executive is Fonterra’s Theo Spierings who earned $4.94 million in 2015. Last September, the firm announced 750 staff would be laid off. ANZ New Zealand chief executive David Hisco slipped to second place from last year in earnings, receiving $4.18 million last year.

The nation’s growth is expected to be about three per cent this year and could slow to 2.7 per cent by 2017, according to the Organisation for Economic Cooperation and Development's (OECD) latest global outlook. The OECD also said the government needed to deal with the growing inequality in the country. Although New Zealand should be among the stronger growing economies in the developed world this year, the OECD said income inequality and poverty in New Zealand had worsened and needed more attention from the government. "It (the government) needs to do so by improving actions across the whole public sector in areas such as social housing, obesity and early childhood education," the report warned. But low dairy prices and the slowing earthquake rebuild could slow growth next year which could lead to a sharp downturn. "Should this drop away suddenly, both consumption and housing investment would suffer," the report said. The OECD predicted the world economy was likely to grow around 3 per cent next year, which was little changed from this year.

An estimated 20,000 workers and students marched May 31 in Santiago in support of the general strike called by Chile's Workers' United Centre (CUT) to demand labour law reform. The union called for reforms that recognize union rights for workers and ends anti-labour restrictions and working conditions rooted in the Pinochet era. CUT president Barbara Figueroa told the news media that the strike is also aimed at demanding an end to the private pension system, improvements in public health and a new constitution. High school and university student organizations, public employees, teachers and other unions, including the journalists’ guild, turned out for the demonstration. The mobilization, Figueroa said, "is a call to action" for a labour reform bill that during its way through the Senate was modified in ways that run counter to its original content and spirit. The government's bill was primarily aimed at changing business-worker relations by strengthening the unions and collective bargaining, but, after initially being approved by the lower house, it was modified in the Senate.

Some 40,000 striking Verizon telecommunications workers, mostly along the U.S. east coast, returned to work after reaching a tentative four-year agreement on May 30. The International Brotherhood of Electrical Workers and the Communication Workers of America, which represents most of the striking workers, claimed the agreement will protect American jobs and expand union rights for other workers. The six-and-a-half week strike was the longest in the U.S. in three years. According to the unions, the pact includes nearly 11 per cent in raises over the contract term, includes a pledge by the company to create 1,300 new domestic call centre jobs and restricts outsourcing of jobs. The new contracts also for the first time cover some 65 workers in more than a dozen Verizon wireless stores. The unions agreed to some changes in the health care plan to save the company money. The workers are employed in Verizon’s landline businesses which are increasing providing a shrinking share of the company’s profits. Verizon is concentrating on its mostly non-union wireless business and actively seeking to shed the wireline telephone companies. 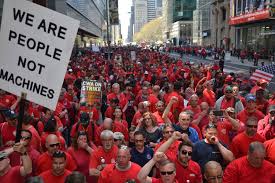 France was in the grips of sometimes violent nationwide industrial actions over labour law reforms with oil refineries, nuclear power stations and transportation affected. The demonstrations and strikes are led by CGT union and supported by six other unions including Force Ouvriere and Unef. CFDT union, considered more moderate, backs the labour reforms. Prime Minister Manuel Valls said reforms will not be withdrawn but could be “modified.” The reforms make it easier for companies to hire and fire staffs which the government claims are necessary to bring down unemployment. The CGT said the reforms will erode job security without bringing down the country's 10 per cent unemployment rate. Valls indicated he was open to “changes, improvements” that could be made to the proposed law. Meanwhile, internal airline flights were disrupted and a rolling strike by train drivers has brought further interruptions to regional and commuter rail services. In addition, 16 of the country’s 19 nuclear power stations are affected.

Health care unions expressed concern over the increase in spending on temporary medical staff at Wellington Hospital. According to official figures, Capital & Coast District Health Board spent nearly $5.2m on temporary medical staff over the 10 months to April this year. New Zealand Nurses Organisation Wellington Hospital organiser Georgia Choveaux said temporary nurses were "valued and skilled", but there was an impact on the hospital when too many fill-ins were used too regularly. “They don't have the same knowledge of the patient and the ward and basic things like where the equipment is. The room and everything in the nursing environment is different, and it takes time to learn,” she said. Public Service Association National secretary Erin Polaczuk pointed to the surge in spending for allied health professionals, which include dietitians, clinicians, technicians and physiotherapists, as a sign of understaffing. Union leaders warned the increase in spending on locums could have “tragic consequences” for patients.

A number of regional KFC restaurants, including Blenheim and Waihi, are so understaffed that customers are abusing already-under-pressure workers. Unite Union said. According to National Secretary Gerard Hehir, frustrated customers are becoming increasingly angry and taking it out on staff. He said staff reported having things thrown at them and, when customers are trapped in the drive-through for more than half an hour, “it's inevitable they'll get angry.” Unite called on staff to close the drive-through or the whole store if they only had one person rostered on which had happened on some occasions.

The New Zealand Meat Workers Union charged Talley’s continues to target Wairoa union members who were reinstated after the union won a court challenge to the company’s demands that workers sign individual employment agreements (IEAs). "Talley's has a reputation that goes back years. It goes back decades actually, not only in the meat industry but also in fishing, seafood processing industry, the vegetable processing industry. You will find there is a litany of Employment Court decisions against this company where workers have tried to form unions," said New Zealand Meat Workers' Union’s Darien Fenton. The freezing works has provided a stable form of employment for the community since it opened in 1916. But local residents told the news media that the relationship with the company changed when the AFFCO plant was bought by food processing giant Talley's five years ago. The owners insisted on workers signing IEAs instead of using the collective agreements in line with the union. Last June, those who refused to sign were shut out and only recently returned to their jobs after the union’s court victory.