This is the third of a series of articles based on a speech to a conference sponsored by the Child Poverty Action Group looking at work and welfare in the 21st century. (Part 1; Part 2). It has been reprinted from The Daily Blog.

New technology is often blamed for the casualisation of work that has occurred and that the continued spread of robots and the new software behind app-based labour control like Uber is a major factor behind future threats to secure work.

It is true that new technology was an important aspect of changes to labour processes in recent decades. For example, computerisation and specialised software have been developed for just-in-time inventories but also just-in-time workers. New industries developed to take advantage of this flexibility. Specialised call centres and the rapidly growing fast food industry moved quickly to use zero-hour contracts. Even a 24/7 operation with thousands of staff like the Casino preferred staff on part time contracts with the bare minimum of hours.

But the major reason bosses got away with what they did was because the working class suffered a major defeat in the period from the mid-1980s to mid-1990s that it has not recovered from.As I wrote in a Unite Union pamphlet called “Exposing Right Wing Lies”:

The deep attacks on our rights and living standards began under the Rogernomics policies of the Third Labour Government from 1984-1990 (named after the then Minister of Finance Roger Douglas who went on to found the Act Party). These were guided by rightwing economic theories that promoted so-called free markets and private property above all else. These are commonly referred to as “neoliberal” economic policies.

Taxes on wealth and property were largely eliminated. All important state sector appointments went to people from the same right wing big business elite – whether in the Treasury or Social Welfare departments. State Owned Enterprises were made to mimic the profit first behavior of their private sector counterparts.

The Reserve Bank was freed from democratic controls to impose crippling interest rates. The dollar was floated to allow big business to move their money where and when they liked. The New Zealand dollar became the victim of international speculators who sent it on a roller coaster ride in value as the world’s eleventh most traded currency. The Reserve Bank used high exchange rates to squeeze inflation, and squeezed the life out of agricultural and other exporters in the process.

The Labour government effectively outlawed strikes outside of the contract negotiation period.

The National government from 1990 to 1999 completed the job. They cut the value of benefits and tightened access rules. The Employment Contracts Act (ECA) launched a full scale attack on worker rights resulting in major losses of pay and conditions in subsequent years. Before the ECA, around 720,000 workers had protection under awards or collective agreements; by 1996 that number had dropped to 350,000. The ECA made multi-employer bargaining illegal and union recruitment very difficult.

Workers wanted to fight, especially when the Employment Contracts Act was introduced. Calls for a general strike were being made in meetings up and down the country. The Minister of Labour Bill Birch said he expected to have to make a lot of compromises in his draft law to quell the uproar. In the end the top leadership of the Council of Trade Unions squashed all moves for a united fight back. The failure of the union officialdom to lead any resistance resulted in tens of thousands of workers losing faith in unions as effective weapons of struggle. 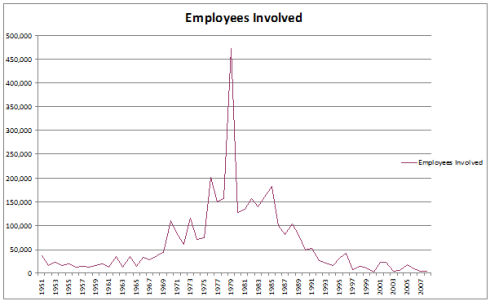 From 1976 to 1986 there were never fewer than 100,000 workers involved in strike activity in any one year. Nearly half a million workers were involved in 1979 when the National Government under Prime Minister Muldoon tried to impose wage controls and was met with a general strike involving 300,000 workers. It is no coincidence that real wages peaked in NZ in early 1982. Numbers on strike halved to 50,000 in 1990 and 1991 and halved again in the mid 90s. 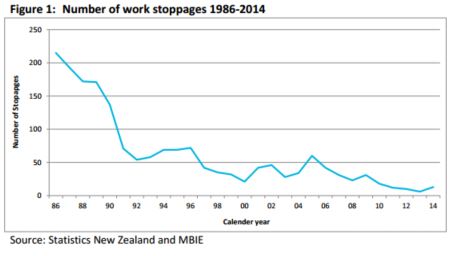 This is what allowed older industries like forestry and construction to be transformed from being large companies with staff directly employed right through the production chain to small head offices contracting work out to smaller companies or contract gangs competing against each other to offer the lowest price and driving down wages to achieve those prices.

Tens of thousands of regular full-time jobs were also lost in what had been secure public sector jobs through corporatisation and privatisation. Many workers, like those who worked for Telecom, were turned into self-employed contractors.

Thousands of other workers like courier drivers and pizza delivery drivers have also been classified as self-employed and offered contracts where they struggle to make minimum wage. This is despite the fact that it is hard to argue they meet the legal definition of self-employed because they have no real control over their own labour at all.

What were usually full-time manufacturing jobs were sacrificed on the free trade altar. A wave of factory closures ripped through working class communities in NZ from the mid-1980s.

A lot of regular full-time work in older industries like hotels were also eliminated as soon as the union was taken out of the equation. Also removed were penal rates and other allowances. We estimate that real wages of a housekeeper in a hotel today are only about 50% of what one would have received under the union contract in the mid-1980s.

More and more employers use temping agencies for at least part of their workforce rather than employ directly. Unite has run into this problem at call centres like Sky TV and manufacturing plants like Allied Liquor.

The bosses have succeeded in imposing job insecurity on large parts of the working class.

Job insecurity for many workers means we have jobs that don’t give us enough hours.

Job insecurity for other workers is being worked too many hours – and not all of them will be paid.

Job insecurity means we often have to work more than one job.Job insecurity today means if we lose a job the one we get to replace it with is more likely to pay less.

Job insecurity means that if we are unemployed we are far less likely to be able to access benefits.This is an important aspect of it from the bosses point of view. If the unemployment benefit is seen as a “right” that workers have then they are protected to a small degree from just accepting shit jobs for shit wages.

Removing the benefit as an entitlement seems to have been the purpose of the intrusive case management regime that began under the previous Labour Government. The bureaucratic nightmare of repeated form filling and participation in useless training is used to just bully and harass people into giving up.

As a consequence, there was much more dramatic fall in the number of people receiving unemployment benefits than the comparable fall in the official measurements of unemployment.

From 1990 to about 2003 there was a broad correlation between the number on benefits and the number of people recorded by the Household Labour Force Survey as unemployed or jobless. Using the jobless number as the comparative the percentage on benefits was always about 70%. That percentage fell to 20% in the five years to 2008 and there was no possible reason for this other than aggressive denial of entitlements.

This has continued under National with increased requirements for women with children of a certain age to make themselves available for full or part-time work. 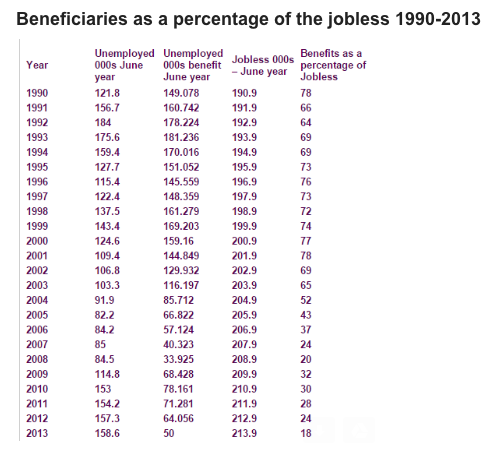 Benefits get cancelled immediately for the most trivial and bureaucratic reasons but mistakes by WINZ take months to correct.

The end result is that the percentage of the working-age population receiving any type of benefit (unemployment, sickness, invalid, sole parent) has been cut from over 13% in the late 1990s to less than 8% today when the unemployment rate has only fallen from around eight to six percent.

Getting that 3% of the working age population (about 110,000 people) off benefits essentially has just removed about a billion dollars a year from working class communities.

It is reflected in overcrowded homes, people living in garages or on the street, kids staying at home longer, poor health, poor nutrition.

Systems have been created to weed out the undeserving poor (those who don’t work or don’t work the hours considered necessary to be deserving).

This creates poverty traps around working extra hours or getting a promotion or a pay rise if we receive working for families. Sole parents must juggle child care and work obligations if they are deemed able to work because their child is a certain age, and again any extra hours worked can penalise you.

An unemployment benefit is also clawed back so mercilessly that additional part-time work is essentially discouraged.

Working for families doesn’t match the combined income of a low wage and a sole parent benefit so parents are forced to live apart to access enough support from the state to be able to afford to bring up a child.

This is true even for the single and couple’s unemployment benefit which if you apply as a couple rather than two singles leaves you $90 a week worse off.

The law incentivises the break up of relationships.

Then of course if they live separately they are spied on to make them prove they are not in relationship – especially if you are a solo mum.

How does a self-employed pizza hut driver access this system?

That is the reality we discovered when we returned to try and unionise the hotels and fast food workers again a decade ago.

But what we also discovered is that these are not some special class of worker with special needs that are different from other workers.

They want the same things. Better pay, more secure hours including the chance of full-time work, respect and dignity and fairness around breaks and rostering and an end to bullying and illegal deductions.

We could fix some things relatively quickly. Other like an end to the zero hours contracts took a decade.

This year we have also ended zero-hour contracts at SkyCity casino. Some progress has also been made in the tourist hotel sector but bars and restaurants and most retail work remains unionised and without any protections.

90% of employees in the private sector remain unprotected by a union. Many will be on some form of zero-hour contract.

That is why working people need to find their fighting spirit again to take on the inequalities of capitalism, challenge their casualised market for our labour.

But this will be a perpetual battle until we also realise we must ultimately replace this system with a system where the working majority democratically own and control the productive process and can run society in the interests of humanity and the planet.