While the fast-food movement may not be close to persuading McDonald’s to adopt a $15 minimum wage, even the campaign’s critics acknowledge it has achieved some of its goals by prompting a national debate about low-wage work and nudging various cities and states to raise their minimum wage. 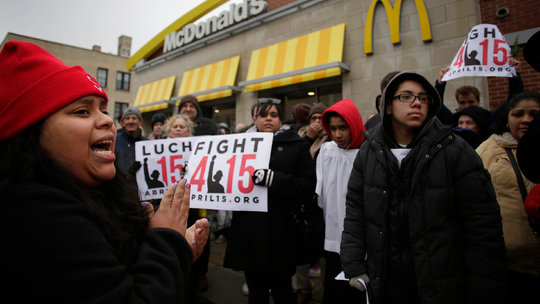 ATLANTA - On a recent Friday, Kwanza Brooks, a $7.25-an-hour McDonald's worker, climbed into a 14-person van to take a four-hour ride from Charlotte, N.C., to Atlanta.

As she and other workers headed south, Ms. Brooks, a short, fiery woman, swapped stories with her companions about unsafe conditions and unfair managers. Upon arriving, they joined more than 400 other people - including home care aides, Walmart workers, child care workers and adjunct professors - at the Ebenezer Baptist Church, where the Rev. Dr. Martin Luther King Jr. had been a pastor.

The gathering on March 21 was in part a strategy session to plan for the fast-food movement's next big wave of protests, which is now scheduled for April 15. But the meeting was also seeking to be something far more ambitious. Through some strategic alchemy, the organizers hoped the gathering would turn the fast-food workers' fight for a $15 hourly wage into a broad national movement of all low-wage workers that combined the spirit of Depression-era labor organizing with the uplifting power of Dr. King's civil rights campaign.

Organizers say they expect 10,000 people at the Fight for 15 protests in New York, Chicago and Los Angeles, with many college and high school students joining the actions. They chose April 15 because the date, 4/15, sounds like "for 15."On the campaign's first day of strikes two and a half years ago, 200 fast-food workers walked out in just one city, New York. But in the wave of actions on April 15, organizers say more than 60,000 people will join strikes and protests in 200 cities nationwide. They also predict there will be strikes and support actions in 35 other countries.

"When we started it was very hard to get people to sign up - they were scared, `I might lose my job,' " said Ms. Brooks, who became a fast-food worker after funding for her job as a youth counselor was eliminated. "But this movement is really growing. People who didn't know who we were, they now know who we are."

Whether from Burger King or Walmart workers, much of the talk was about not being able to make ends meet. Some members of the Black Lives Matter campaign joined the session, and so did three octogenarians who spoke about participating in the famous 1968 sanitation workers' strike in Memphis, during which Dr. King was assassinated. To drum up support for the April 15 protests, several fast-food workers have gone on "freedom ride" bus trips to Tulane, Vanderbilt and other colleges, while pastors at dozens of churches in New York, Chicago and Detroit plan to tell congregants about the protests.

McDonald's, the movement's main target, has shown no signs of bowing to the demands to raise pay or invite in a union. With its sales languishingand having recently replaced its C.E.O., the company has much else to worry about. McDonald's says the series of one-day strikes has barely affected its restaurants, adding that hardly any workers walked out.

"These events have not been `strikes,' but organized rallies designed to garner media attention for which demonstrators are transported to various locations," said Heidi Barker Sa Shekhem, a McDonald's spokeswoman. "Historically, very few McDonald's employees have participated in these organized events."

While the movement may not be close to persuading McDonald's to adopt a $15 minimum wage, even the campaign's critics acknowledge it has achieved some of its goals by prompting a national debate about low-wage work and nudging various cities and states to raise their minimum wage.

"They have contributed to the wins in the ballot initiative in different states and localities," said Diana Furchtgott-Roth, a senior fellow at the Manhattan Institute, a conservative research center. "We saw the ballot initiatives to raise the minimum wage passed even in Arkansas, and we see cities such as Seattle having a $15 minimum wage. So they're succeeding in that way."

Ms. Furchtgott-Roth argued that the so-called Fight for 15 would ultimately hurt many of the low-skill, entry-level workers that it is trying to help, saying that pushing up wages beyond what the market can bear would lead to less hiring.

The Service Employees International Union, one of the nation's largest and most activist unions, has quietly pumped more than $15 million into the movement, helping to hire dozens of organizers to rally fast-food workers nationwide.

The S.E.I.U. has been increasing pressure on McDonald's. It helped arrange for a coalition of European and American unions to accuse McDonald's European operations last month of avoiding more than 1 billion euros in taxes by having royalty payments go through a small Luxembourg-based subsidiary. In response, the European Union's directorate of competition has begun a preliminary inquiry on McDonald's tax practices.

Brazil's two biggest labor federations sued McDonald's largest franchisee in Latin America as well, accusing it of time-clock fraud, unsanitary working conditions and failure to pay unemployment insurance. Those charges could lead to fines of up to 30 percent of annual sales.

The franchisee, Arcos Dorados, said it was "absolutely confident" that its labor practices complied with all laws.

The S.E.I.U. helped persuade the National Labor Relations Board's general counsel to accuse McDonald's of being a joint employer with its franchisees, a move that could make it jointly responsible when franchise operators illegally fire workers or cheat them on wages. McDonald's, with the support of many similar restaurant chains, is fighting this action.

Two weeks ago McDonald's workers in 19 cities filed complaints with the Occupational Safety and Health Administration, saying they had been burned on the job - while filtering grease, for instance - because of a lack of training and protective equipment. McDonald's said that it would review the allegations and that its franchises "are committed to providing safe working conditions."

Hinting that they have other weapons in their arsenal, the movement's strategists voice confidence that McDonald's will at some point move toward them on wages. Mary Kay Henry, the service employees' president, said, "I have no idea how this breakthrough will occur - it's possible it will happen as we prepare for their shareholders meeting in May."

That may be wishful thinking, but with Walmart and several other companies starting to raise their base pay in response to public pressure and tighter labor markets, McDonald's may eventually feel compelled to join in.

Before last May's shareholders meeting, more than 1,000 protesters demonstrated outside McDonald's headquarters in Oak Brook, Ill., and more than 100 were arrested at a sit-in. Organizers say this year's protests might be bigger.

Some of the S.E.I.U.'s two million members have grumbled that this campaign might do little for the janitors and hospital workers who belong to the union. But Ms. Henry said the movement had already succeeded in raising wages for workers beyond fast food.

The campaign's ripple effects, she said, helped persuade San Francisco to approve a $15 minimum hourly wage and Chicago to adopt a $13 minimum. She said it helped persuade the Los Angeles school district to agree to pay all its employees at least $15 an hour.

Joining in, the Chicago Teachers Union recently demanded that janitors and all other workers in that city's public schools be paid at least $15 an hour. Ms. Henry noted that the Multnomah County Board in Oregon had established a $15 minimum wage for the county's employees, many of whom now earn $11.99 an hour.

Angelo I. Amador, the National Restaurant Association's vice president for labor policy, criticized the demand for $15. "It goes way beyond anything being considered at the federal level," he said, pointing to President Obama's call for a $10.10 minimum wage. "It's not going to have a good effect."

He said a $15 wage would reduce restaurant employment and push up menu prices.

Nelson Lichtenstein, a labor historian at the University of California, Santa Barbara, said it was striking that the Fight for 15 movement seemed to be making substantial gains on one front even as labor unions suffered serious setbacks in other areas, including the passage of so-called right-to-work laws in Wisconsin and Michigan's barring of any requirement that workers pay union fees.

"This movement is way beyond fast food," Ms. Henry said. "We aren't going to stop until the service sector in the U.S. becomes the foundation for the next American middle class."