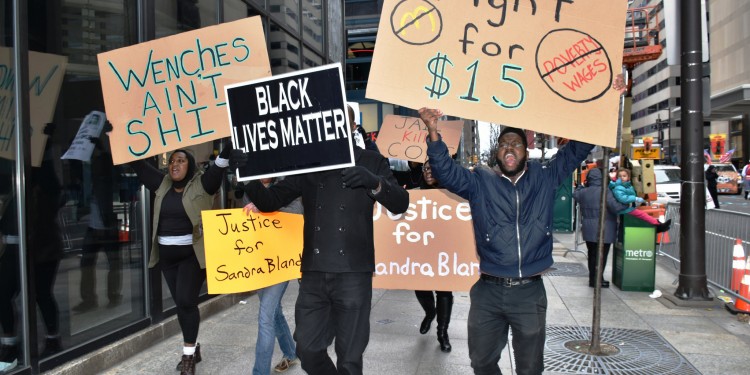 Thousands of low-wage workers will gather in Richmond, Va., next month in an attempt to unify the racial and economic protest movements currently animating the American left.

The inaugural Fight for $15 convention, slated for Aug. 12-13, springs from the now four-year-old push to increase government-mandated minimum wages and expand worker access to unions. But organizers chose the convention location, in the capital of the old Confederacy, to deepen their movement's links to activists seeking citizenship for immigrants who entered the United States illegally and to Black Lives Matter, which protests police violence against African-Americans.

Organizers say the issues of racial and economic justice increasingly overlap. They note that more than half of black workers and three in five Latinos earn less than $15 an hour, according to the National Employment Law Project. They are seeking to cast recent minimum-wage battles in racial terms, including votes by predominantly white state legislatures in Missouri and Alabama to block minimum-wage hikes adopted by majority-black city councils in those states.

“You can’t disconnect" issues of race and economics, said Rev. William Barber II, the president of the North Carolina NAACP and president of the social justice group Repairers of the Breach. "They never were. ... It’s fusion politics.”

Emphasizing those themes, the convention will end with a march on monuments to the Confederacy. It will be “the jobs that are the remnants of slavery and have never been part of the American middle class, linking arms with jobs that used to be middle-class” but have been devalued in recent decades, said Mary Kay Henry, president of the Service Employees International Union, which is the primary financial backer of Fight for $15.

“It’s in the linking of our fights," Henry said, "that our power really will be realized.”

Convention attendees are looking to pressure the presidential candidates to support their movement, though they are unlikely to endorse anyone. (The Democratic Party platform backs a $15 an hour minimum wage, though the party nominee, Hillary Clinton, has stopped short of calling for one.) Henry said the Fight for $15 convention is likely to draft its own, relatively brief platform statement.

“We’re not really endorsing our candidate. We’re pushing our issues to the front,” said Terrence Wise, a McDonalds worker in Kansas City and a member of the Fight for $15 National Organizing Committee.

That push hit Richmond three weeks before the convention is set to begin: On Thursday, some McDonald's workers there walked off the job to demand $15 an hour and union representation.