Recently over 150 international students from India were issued deportation orders by Immigration New Zealand for the use of forged financial documents. The students had made all payments as advised by agents and were not aware of the fraud being committed by the agents on their behalf. By deporting the students the NZ government would be punishing the victims rather than the culprits.

A peaceful protest was held in support of the students on Saturday, September 3, outside National list MP Dr Paramjeet Parmar’s office in Mt Roskill, Auckland. This protest was organised by Migrant Workers Association and supported by Socialist Aotearoa, Unite Union, First Union, Etu, Unimeg and IMWA.

Chants of “We want Justice” and “We are not cheaters” could be heard as protesters marched along Stoddard Road. The protesters demanded that the deportation orders be withdrawn and the students allowed to stay and complete their education in New Zealand.

NOT OUR FAULT - Justice for Indian Students - a short film by RJ Roopam - please share far and wide.

It was also demanded that to prevent exploitation of further students and migrant workers in NZ, a stricter regulation of immigration agents and PTEs be implemented.

Overwhelming solidarity and support was obvious from some of the speeches including Mike Treen of Unite Union, Robert Reid of FIRST Union, Joe Carolan from Socialist Aotearoa, Deacon Chris Sullivan of Catholic Church, Dennis Maga of First Union, Kuldeep Singh of Panthak Vichar Manch to name a few. 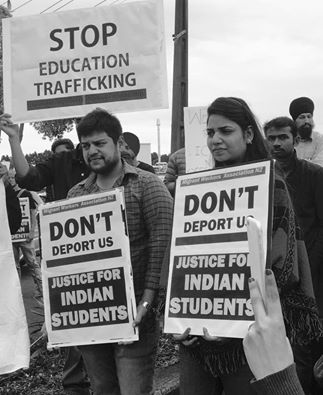 International education is New Zealand’s fifth-largest export generating some $2.8bn per year in 2014. This figure has been on the rise and current New Zealand government wants to double this figure by 2025.

Last year, New Zealand saw the highest number of International students arrive to gain qualifications from the reputable, in some cases, and not so reputable tertiary education establishments in most cases.

The second-largest number, 23000, of students came from India making approximately 25% of the market share. A majority of these students are here for opportunities that are beyond their reach back home. Inevitably for most, the more reputable universities and tertiary education institutes in New Zealand are also financially beyond their reach. As a result, most students have no option but to study at privately owned colleges or private training establishments (PTE) as they are more affordable.

To further add to this mix most students pursue this path via immigration agents in India. Some PTEs do not allow direct application from students, therefore forcing the use of agents. Agents involved generally handle all stages of the process to the extent that the students are not aware of what is being communicated to Immigration New Zealand on their behalf.

The NZ government, however, refuses to show any relaxation regarding deportation of the Indian students.