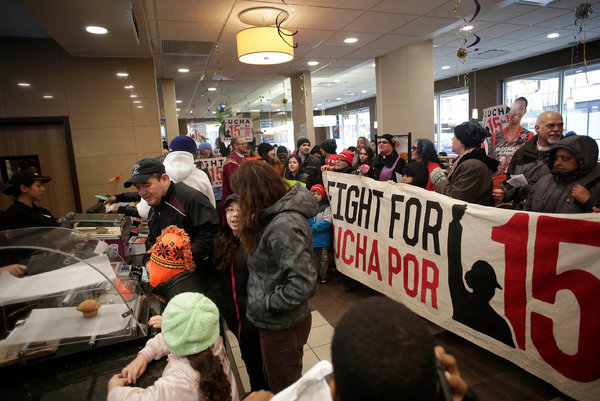 US workers have been fighting for $15 and a union at McDonald's and other fast food companies.
The Huffington Post  |  By Alexander C. Kaufman

McDonald's is finally giving some of its workers a raise.

The fast-food giant on Wednesday announced plans to give employees a 10-percent pay bump and some extra benefits.

The raise will affect about 90,000 workers at a small fraction of McDonald’s stores. Employees at franchises, which make up the majority of the burger chain's locations, won't be affected.

The increase will lift the average hourly wage at McDonald’s to $9.90, and to more than $10 by the end of next year. The rate currently sits at $9.01, according to the Wall Street Journal.

McDonald's will also let workers at non-franchised locations who have been with the company for more than a year earn up to five days of paid time off each year. Additionally, The company will pay for workers to earn a high school diploma and offer some college tuition assistance. Franchise workers will have access to the educational perks, but not the paid time off.

“We’ve been working on a comprehensive benefits package for our employees -- the people who bring our brand to life for customers every day in our U.S. restaurants,” CEO Steve Easterbrook said in a statement. “We’ve listened to our employees and learned that -- in addition to increased wages -- paid personal leave and financial assistance for completing their education would make a real different in their careers and lives.”

McDonald's did not immediately respond to a request for further comment.

The move comes two weeks ahead of a planned international strike organized by the movement Fight for $15, which urges fast-food employers to pay workers a minimum wage of $15 per hour.

The group condemned McDonald’s announcement as a “weak move for a company that made $5.6 billion in profits last year.”

“This is too little to make a real difference, and only covers a fraction of workers,” Kwanza Brooks, a McDonald’s employee earning $7.25 per hour in Charlotte, North Carolina, said in a statement. “We’re going to keep fighting until we win $15 and union rights for all fast-food workers and our families.”

McDonald's joins a growing list of low-wage employers, including Walmart and Target, that have raised wages in recent months. Labor advocates point out that wages of $9 or $10 an hour, though well above the national minimum wage of $7.25, are still not enough to pull many families out of poverty.

The raise also marks the latest step by McDonald’s to revitalize its ailing brand amid slumping sales. The company kicked off an aggressive campaign last October to present its food as authentic, going as far as to tout the fact that its meals can, in fact, rot. In January, McDonald's said it would cut more items from its menu as it tries to slim down options. Last month, the chain said it would eliminate human antibioticsfrom its chicken supply.
http://www.huffingtonpost.com/2015/04/01/mcdonalds-wages_n_6987542.html
Do you like this post?
Tweet