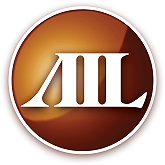 AIL of NZ Managing Director Steve Friedlander, who has been contracted with AIL for over 40 years, said becoming a Living Wage Employer has been a long-term goal for many years, and one that is "the right thing to do to set the pace for others to follow."
"We serve thousands of kiwi families and know first-hand by experience what the wants and needs are for them. We want to lead by example in our dedication and customer service to them and to be the chosen insurance provider for what is important in their own lives to be protected."
American Income Life has an "A+ Superior" rating by A.M. Best Company (rating as of 7/19) and works with hundreds of groups in New Zealand, including the NZ Trade Unions, Credit Unions, and Associations such as Grey Power with over 70,000 members. 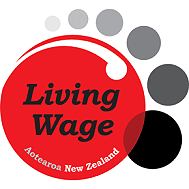 The Living Wage story is the story of an exciting movement, campaigning to lift workers out of poverty wages.


The first campaign was launched in 2012 in Auckland and in Wellington, followed by other local networks around the country.
Six City Councils, including Porirua, Auckland, Wellington, Christchurch, Dunedin, and Tauranga have joined close to 160 employers and businesses on the 2019 fully-accredited New Zealand Living Wage Employers.
SKYCITY CASINO STRIKE MAKES HISTORY
SEA-Unite union members working for SkyCity Casino in Auckland have taken a strike action the last two weekends to bring "back the weekend."
The strikes, the last of which ended Monday morning, September 9th, have successfully disrupted casino operations including security, cleaning and long cashier lines.
The workers are seeking better pay rates for weekend and night work, but, according to Gerard Hehir, the National Secretary of Unite Union, there has been "no movement at all from SkyCity."
The Casino has approximately 2000 employees, 900 of which are union members, and those numbers are growing -- with 60 new members since the actions began.
The SkyCity strike has been called the biggest migrant workers strike in New Zealand's history.
JOIN A UNION
The Centre for Labour, Employment and Work (CLEW) at Victoria University has released their annual analysis of collective employment agreements (CEAs), showing once again that it pays to belong to a union.


The report, which covers through June 2019, finds that, on average, wages in collectives rose by 2.8 per cent, significantly higher than the 2.3 per cent last year.


Over the same period, the Labour Cost Index (LCI), which is dominated by people on individual rather than collective employment agreements, rose less: by 2.1 per cent (and 1.9 per cent last year).
Helped by the rise in the Minimum Wage, private sector collective pay rates rose a strong 3.5 per cent, the highest increase since 2010 and well up from last year (2.9 per cent). By contrast, the private sector LCI rose only 2.2 per cent, a slight change from last year's 2.1 per cent, although still the highest since 2009.
Central government CEA wage rates rose 2.3 per cent, the highest since 2011, and the same rate as the increase in the central government LCI.


From 2011 to 2019, CEA increases were higher in all industries than those shown in the LCI, with the exception of Health Care and Social Assistance.
EQUALITY PAY
Labour market data released by Statistics New Zealand on August 21st set off a flurry of reaction to the gender pay gap in New Zealand.
The gender wage imbalance, or gap, in the average wage is 11.9 per cent, a 2 per cent improvement over 13.9 per cent last year. 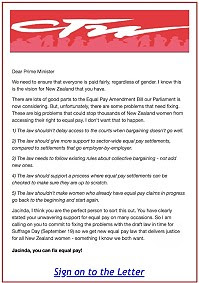 There is currently a 9.3 per cent difference between male and female median hourly earnings. While a significant improvement on the 16.2 per cent difference since 1998, it is barely unchanged from 2017.
"These new figures confirm that we are not moving fast enough, and in parts of the public service we are at risk of falling backwards. It's time to take the hand brakes off and pay women more," said Public Service Association National Secretary Kerry Davies.


While pay equity advancements have been made, in large part due to union-led pay equity court cases, the disparity still exists and unions are calling on the Labour-led government to deliver.


The New Zealand Council of Trade Unions has issued a public letter to Prime Minister Jacinda Ardern regarding the Equal Pay Amendment Bill currently under consideration.
"In recent years tens of thousands of New Zealand women have won equal pay. There is a draft law in Parliament right now that wants to help even more Kiwi women do the same. But that draft law has got some important things wrong. It needs to be fixed quickly - before it gets set in stone." Union leaders were calling on Prime Minister Jacinda Ardern to step in and fix it by Suffrage Day, Thursday 19 September.


New Zealand's Gender Pay Principle, calling for an end to gender based inequalities in the state sector, was developed in 2015, following a legal claim filed by PSA against the State Services Commission.


"We recognise and appreciate the Labour-led government's work preparing the Equal Pay Amendment Bill, and note that significant minimum wage rises have helped women in both the public and private sectors...We want legislation that embeds the ability of workers across sectors to efficiently and effectively settle equal pay claims through union collective bargaining," said Davies.

CANADA'S UNIONS SEEK FAIRNESS ON BALLOT
This Labour Day, Canada's unions launched a campaign to make fairness a ballot box question in the October federal election.
That means unions will be calling on Canadian workers to vote for candidates who support universal pharmacare, retirement security, climate action, equity and inclusion, and good jobs for everyone.
"Over the last four years, our work has resulted in impressive gains: expanding public pensions, protecting victims of domestic violence, investing billions in infrastructure projects, banning asbestos, and making pay equity the law," said Hassan Yussuff, President of the Canadian Labour Congress (CLC).
"While these have been substantial victories, we are only getting started. Low wages, precarious work and underemployment continue to hurt too many Canadians; fear and insecurity are fueling racism and intolerance, and climate change threatens the survival of our planet."
"We will do our part to mobilize Canadians to choose candidates who will make Canada more fair for workers and their families," said Yussuff. "We will be urging every candidate to commit to creating good jobs. We will be pushing the political parties for climate action for a sustainable planet. We will be challenging hate and divisiveness with equity and inclusion."
By launching a national campaign, "A Fair Canada for Everyone," the CLC will be working with labour councils, federations of labour and unions across the country to advance the issues for workers and their families.


G20 LABOUR COMMITS TO HUMAN-CENTRED FUTURE OF WORK
The G20 Labour and Employment Ministers met in Matsuyama, Japan September 1-2, where they adopted a Declaration committing to a "human-centred future of work policy" priorities focused on demographic change, gender equality and women's empowerment, responding to new forms of work, and adapting to demographic change and longer working lives.
International Labour Organization Director General Guy Ryder, who took part in the meeting, said, "The G20 clearly recognizes the urgency of addressing the multitude of challenges we face in this rapidly changing world of work."

A strong focus in discussions was the need for policies that enable and encourage workers to exercise choices and preferences over the course of a multi-stage working life with multiple transitions. This includes promoting flexible retirement, encouraging employers to retain and hire older workers and making the transition from work to retirement easier. The commitments reflect one of the main recommendations of the ILO Global Commission Report on the Future of Work, which was published in January 2019, at the start of the ILO's Centenary Year.

Issues linked to the care sector, including its job creation potential and the need to address major gender imbalances, were also an important part of discussions at the meeting as provision of long-term care is a major issue in G20 countries that face a rapidly aging population.


SOUTH AFRICAN UNION SECURES END TO HARRASSMENT
A campaign by the Independent Democratic Union of Lesotho (IDUL), an affiliate of IndustriALL, to stop long-running gender-based violence at Nien Hsing Textile company factories has resulted in binding agreements to end the harassment, signed by unions, apparel brands and women's rights organizations.

BUSINESS, LABOR AND NEARLY 325,000 AMERICANS SAY "NO" TO IRAPS
A united front of business officials, labor leaders and over 300,000 working Americans have submitting the greatest number of comments ever received by the Department of Labor regarding the DOL's proposed rule to dramatically alter the nation's apprenticeship system with a new proposal known as Industry Recognized Apprenticeship Programs (IRAPs).
North America's Building Trades Unions' President Sean McGarvey said, upon the end of the formal comment period, "This historic number of nearly 325,000 comments submitted by working men and women across the United States, makes it clear that construction workers don't want the federal government to cut wages and destroy jobs in a dangerous economic experiment...
These Americans voted for job creation, not lower wages. They voted to end the special interests' grip on government. They voted to strengthen communities long forgotten, not put public safety at risk. Though the comment period on this major rule occurred in the middle of the summer vacation season and no customary extensions to the time for filing comments were granted, this historic engagement by working families should remind those in the White House and the Department of Labor who are pursuing their own, narrow, ideological agenda that the voting public is now on high alert and will be watching as this proposal develops.
"Our members do not stand alone. Through this comment period, contractors, industry leaders, project owners, educators, safety and training professionals, investors, community advocates, faith leaders, environmental stewards, veterans, State Apprenticeship Agencies and overwhelming bipartisan majorities in Congress have spoken in one voice: IRAP's have no place in the construction industry.
For over 80 years, the Registered Apprenticeship model has served the construction industry and entire communities well by providing safe, structured learning environments where men and women from all walks of life can learn a trade and provide for their families with middle class sustaining careers...IRAPs will not provide any of that but will instead only serve to advance a race to the bottom and undermine the safety and financial security of hard-working families."