Unions, community groups and activists held a Day of Action on Saturday, September 10 to oppose the Trans-Pacific Partnership (TPP) trade agreement. Thousands of New Zealanders marched and protested against the proposed trade deal in dozens of events held across the country. Anti-TPP demonstrations were held in Auckland, Wellington, Dunedin, Hokianga, Whangarei, Rotorua, New Plymouth, Palmerston North, Nelson and other communities. Among the groups supporting the action were the NZ Council of Trade Unions, Public Services Association, FIRST Union, Greenpeace, 350.org, Oxfam New Zealand and SAFE for Animals. "This is a time when families are struggling with high housing costs, insecure work and stagnant wages. The gaps between the have and have-nots are widening in our society," co-ordinator, Barry Coates said. According to the organisers, the purpose of the event was a need to "join the dots" between many issues and “reclaim democratic rights” for citizens and national sovereignty. Critics charge the trade proposal gives corporations too much power and undermines jobs. Labour, Greens, NZ First and the Maori Party have announced their opposition to the agreement. 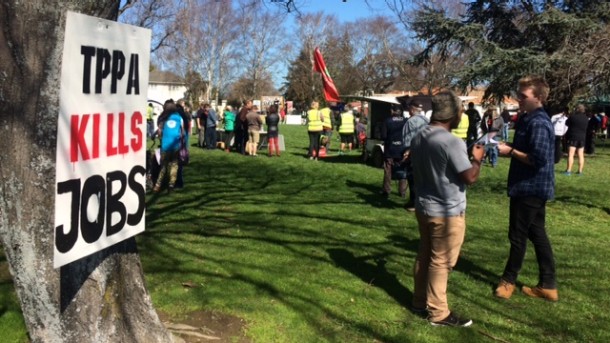 New Zealand's unions called for paid leave for the victims of domestic violence. New Zealand Council of Trade Unions Secretary Sam Huggard said working families deserve better support systems at work for survivors of violence. "Maintaining your connections to work and employment often can be a really important factor in reducing the impact of violence. Often it's sort of the most normalizing and safe space away from the home, and so we want to make sure women have got every opportunity to maintain that connection," he said. The government recently announced 50 law changes to the Domestic Violence Act and two new offences specifically for domestic violence changes. Non-fatal strangulation and assaulting a family member were added as part of a package of measures designed to cut rates of family violence. Huggard said paid leave for the victims would enable them “to get on with getting things sorted” without having to worry about added stress at work. "People wouldn't have to second guess it, they know it's an entitlement they can call on if they're in a crisis situation,” he said. According to Huggard, the CTU has raised the issue in the past with both the Justice and Workplace Relations Ministers and is “hopeful they may now respond.”

Unite demanded that large companies prove they are upgrading the skills of current workers before they are allowed to recruit workers from overseas. The union responded to recent data that showed the Government, for example, granted over 2,000 resident visas for foreigners to work in New Zealand as chefs and retail and cafe managers last year. Yet, there is evidence of that the shortage of chefs here is “weak” with 490 qualified Kiwis seeking chef jobs. Skilled Kiwis also are available for retail management positions. According to the union, 900 hundred immigrants were given residency to work here as chefs along with 600 cafe and restaurant managers. Unite said companies should be required to “upskill and promote” from within. "The larger companies certainly should have to prove that they have an active programme for training their own staff," said Mike Treen, Unite national director. The Government said any changes to the international recruitment process will be announced before the end of the year.

Statistics New Zealand this month reported the economy grew by 0.9 per cent in the three months to June, lifting annual growth to 3.6 per cent. Increased consumer spending and the biggest quarterly jump in exports in nearly 20 years helped the expansion. Despite the positive economic signs, experts warned the true picture is not being painted by the figures. New Zealand First Leader Winston Peters said the data paints “a completely fake picture” of the economy. He said the country's population is growing at two per cent annually from record immigration which is “running at 70,000 net” and natural increases. As a result, two per cent should be deducted from GDP numbers “before any real growth can be claimed.” NZ Council of Trade Unions top economist Bill Rosenberg warned that “not all growth is equal.” He said GDP on a per capita basis rose only 0.7 per cent over the entire year, well below the 1.6 per cent average since 2012. "To make things worse, the income New Zealand generates is getting less fairly shared. After housing costs are taken into account, last week's Ministry of Social Development report showed inequality up on three different measures since 2008/09", said Rosenberg.

The Labour Party called for a review of the immigration system following claims that human traffickers used Facebook to lure migrants into jobs paying less than $10 an hour on New Zealand orchards. Labour Party's spokesperson for immigration, Iain Lees-Galloway, said the incident is a latest in a number of stories about the exploitation of migrant workers and he said the case should be investigated. "Our immigration system is absolutely out of control and the government is failing migrants. It's allowing them to be exploited, and it's failing New Zealand by having an immigration system which is absolutely broken. We are now getting these stories on a daily basis," he said. According to Stand against Slavery chief executive Peter Mihaere, there are “thousands of migrants” exploited in New Zealand. He said migrants are lured to this country to work in child care, elder care, courier companies and cleaning agencies, not just industries like horticulture or agriculture. He said exploited migrants are “too scared” and too poor to escape. Mihaere is working with a University of Auckland researcher on what will be the country's first in-depth study on the topic.

The latest Household Labour Force Survey showed almost one in ten Kiwis are working without a written employment contract, a legal requirement under New Zealand employment law. According to Statistics New Zealand, 8.6 per cent of employees, about 171,000 workers, reported they did not have a written contract while another 56,300 said they did not know whether they had one or not. Those more likely not to have a written agreement were part-time and casual workers compared with full-time and permanent employees. E tū union national secretary Bill Newson was not surprised by the high numbers of people working without a written contract, and said people were quite vulnerable when looking for work. "You know, when you want a job, you don't want to rock the boat and it doesn't occur to people,” he said. "They want to get on the short list and get the position, they're very excited, and they realise some time down the line 'oh, I should have an employment agreement' but by then it's too late." Workplace Relations and Safety Minister Michael Woodhouse expressed concern about the findings and said employers are expected to meet the requirement for a written employment contract.

The global union Education International (EI) and the British National Association of Schoolmasters Union of Women Teachers recently held a seminar to assist the organizational efforts of the Iraqi Teachers Union (ITU). According to EI, 25 ITU leaders and heads of ITU branches participated in the skills building workshop conducted by EI's Education International Arab Countries Cross-Regional Structure (EI ACCRS) in coordination with the British education union officials. The workshop highlighted the importance of organisers within the union, what ITU needs to improve its organisers' skills, and how social media can help recruit new members. “Education International was founded on the fundamental principle that organised teachers and education employees could improve the status and the welfare of teachers and education employees,” EI ACCRS coordinator Huda Khoury told participants, the EI said in a statement.

NZ Plastics manufacturer Sistema, one of New Zealand's biggest companies, is “a modern day sweatshop” and exploiting workers, charged E tū. The union said the company pays 400 of its factory workers minimum wage and makes them work 60-hour weeks on 12-hour shifts. E tū manufacturing coordinator Anita Rosentreter said the company is only meeting the minimum requirements and the health and safety of employees is a serious concern. "The workers are exhausted all the time. They barely have any time to relax; they barely have any time to spend with their family. They find the long hours and repetitive movements are causing aches and pains,” she said. The union is currently in negotiations with Sistema. According to Rosentreter, the union has been trying to negotiate better working conditions for years, but the company doesn't listen. "This is a company that discourages its workers from being part of the union. It discourages workers from having a voice in the workplace. And when concerns have been raised in the past by workers, whether they're union members or not, the response has been: 'Don't like it? Get another job,'" she said.

Workers for retailer TV Shop in Auckland went on strike September 17 for better pay and work hours, reported First Union. Union organiser Kate Davis said workers were fed up with the amount of pay, insecurity of hours and no redundancy package. First Union has been in negotiations with TV Shop since July last year. "The TV Shop is creaming it, but the people who do the work of selling and moving its brands are expected to survive on little more than the minimum wage and a roster that changes from week to week," Davis said. "Many of our members have gone years without a pay rise. Many of them see their hours change week to week on nothing more than a manager's whim." Paul Meier, former business partner of television personality Suzanne Paul, is the owner of Brand Developers, which also trades as TV Shop. The controversial firm is known for infomercials selling products like the Bambillo Pillow, Transforma Ladder and Thin Lizzie makeup. In 2013, the Commerce Commission investigated the safety of the Transforma Ladder, which was pulled from the market. TV Shop was fined $153,000 last year for falsely claiming the ladder could carry 180 kilograms and sold ladders in breach of an Unsafe Goods notice that prohibited their sale.

The Public Service Association welcomed the decision by Chief District Court Judge Doogue who found a “reasonably predictable hazard of client-initiated violence” at the Ashburton Work and Income office where two PSA members were murdered. The judge said the MSD did not take “all reasonable” steps to prevent it. PSA National Secretary Glenn Barclay said the decision in WorkSafe NZ vs Ministry of Social Development recognises the risks public servants face in their work. "Judge Doogue heard experts discuss the serious and likely risk that a lone person on a mission might use a weapon to attack staff or clients at a WINZ office. She found that physical restrictions on clients accessing staff working areas were a reasonably practicable step to take - and that none were in place," he said. Barclay said the PSA will examine the decision further and “work through its ramifications, both for MSD sites and other public sector institutions.” Leigh Cleveland and Peggy Noble were murdered and Kim Elizabeth Adams seriously injured in 2014 by Russell John Tully, a 49-year-old homeless man who reportedly had a grudge about his treatment by WINZ. A jury found him guilty of the two murders and attempted murder in 2016.