The Maritime Union of New Zealand (MUNZ) praised the decision by Ports of Auckland to stop releasing methyl bromide emissions into the air. MUNZ National Secretary Joe Fleetwood said the decision is an example of what publicly owned ports can deliver, "if and when they prioritise community interests." The union said the move to fully recapture the toxic gas after fumigation "sets a new benchmark for industry best practice." According to MUNZ, methyl bromide is linked to motor neurone disease and harmful to the ozone layer and used to kill insects in logs before export. "We will continue the campaign to stop rogue employers exposing people to methyl bromide for another decade if need be," said Fleetwood. "Eliminating the risk from our ports and communities will save lives." The union also warned that the rivalry between publicly-owned ports undermines best practice standards, and drives a race to the bottom in the industry. "The Government must not allow best practice in some ports to be undermined elsewhere," said Fleetwood. 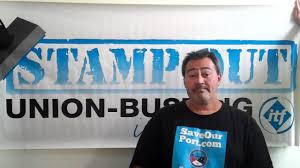 New Zealand's unions had harsh words for the recent budget submitted by the government citing underfunding in key areas important to working families. Public Service Alliance National Secretary Glenn Barclay said the spending plan does not allow all New Zealanders to share in a relatively strong economy. "Along with hard-working Kiwi families, public servants were hoping for a budget with heart. But this isn't it. We're deeply disappointed at the lack of substance in this budget, and it reinforces our view that New Zealand needs a change of heart." Council of Trades Unions head Richard Wagstaff said the budget fails to "make our country a more equal society." "A successful budget moves New Zealand towards being a more equal society - it is an opportunity to make New Zealand a better place," he said. "This Budget lacks ambition, it lacks leadership and most importantly it lacks a vision and commitment to making life better for all Kiwis." Education also "is a loser in the new budget," with early childhood services suffering the eight-straight year of a funding freeze, and an increase to the school operations grant that will not cover inflation, warned New Zealand Education Institute President Lynda Stuart.

E tū, New Zealand's largest private sector union, criticized timber giant Carter Holt Harvey which locked-out 160 of its timber mill workforce in regional Victoria, Australia on April 21. The union called on billionaire Graeme Hart, the nation's richest man, to "stop giving New Zealand a bad name in his treatment of Australian workers" and said the company's actions were "heartless." E tū Director of Industries Neville Donaldson said profitable companies such as Carter Holt Harvey should live to "a high standard" no matter where they operate. "Here's a small provincial town, Myrtleford, where the community relies on wages from their workplace and a Kiwi company is attacking that community. It could just as easily be Kawerau, where a company's actions could do serious damage to the town's economy and its cohesion," Neville said. The Electrical Trades Union (ETU), Australian Manufacturing Workers' Union (AMWU) and the Construction, Forestry, Mining and Energy Union (CFMEU) represent the Myrtleford workers.

Kiwis who lose their jobs suffer the effects on their employment and income for years, even with government help, a new study revealed. Motu Economic and Public Policy Research senior fellow Dean Hyslop said that five years after losing their job, workers' jobless rate was 10 per cent higher and their wages 13-22 per cent lower than comparable workers who remained employed. The study tracked those made redundant in New Zealand between 2001-2010. Hyslop said government benefits provided some support for laid-off workers, but the shortfall was still substantial. "However, despite such income support, displaced workers' total individual income was about 30 per cent lower than comparable workers during the first year after displacement, and about 20 per cent lower after five years," he said.

The Labour Party unveiled a major new immigration policy to stem the number of new arrivals who plan to live in New Zealand. Labour Party leader Andrew Little said Labour would impose a stringent new set of immigration rules in Government that he hoped would reduce immigration by up to 30,000 annually. The policy would tighten rules to limit student visas, remove work visas for some international graduates without job offers at the end of their course and regionalise the occupation list for all work visas. "Closing off the ability to work during and after study for people who do low-level courses will stop backdoor immigration," Little said. New figures show that net immigration is at a record high and shows no sign of slowing. Statistics New Zealand said the net gain from immigration rose to 71,932 in the year to March 31, up from 71,333 in the year ended February 28. In the month of March alone, the gain was 6100. At the same, time Labour will make it easier for people with exceptional skills and talents to come to New Zealand with a new Exceptional Skills Visa, he said.

Economic consultants Infometrics conducted a new study of New Zealand's health care system which supported the claims of health care unions that the system is seriously underfunded. The study, commissioned by the Labour Party, found that the health system would need $2.3 billion by June next year to restore funding levels to what it was seven years ago. "In a single year alone, if we really wanted the health system to be funded to the level it needed to be... the budget of a couple of weeks ago would've put an extra $220 million into the health funding," said Party leader Andrew Little. New Zealand health care unions have long called attention to the strains on the system due to underfunding. According to news reports, a shortage of hospital beds in Wellington has forced the Capital and Coast District Health Board to put up pre-op patients in motels. "What it comes down to is after nine years, we've got a government that hasn't funded health services to keep up with the growing population as well as the change of population, the age of the population," Little charged.

Australia's Communication Workers Union said workers were "ambushed" by Telstra's announcement June 14 that 1,400 jobs would be cut over the next six months beginning in July. CWU national secretary Greg Rayner said the union had learned about the job cuts through the media, while CWU national president Shane Murphy said the cuts would impact Telstra's service. The move was "appalling" and had "obviously been months in the planning by the executives," said Murphy. Murphy told the news media the job cuts will be across the board, including maintenance, construction, technician, and call centre jobs. "This is a massive job cut broadly spread across most of Telstra's business units," he said. "It will have an overwhelming effect not only on our members, but their families as well as customer service across the country." The company said the move was necessary to "cut costs" in the face of increasing competition. Union officials said, "many workers had been left in the dark" as news of the looming job cuts spread. "It's disrespectful to our members, their families and the union," said John O'Donnell, assistant divisional secretary of the Communication Workers Union.

U.S.-based Service Employees International Union opened a web-based service to help McDonald's franchisees in China protect themselves in the face of a proposed sale of the company's 20-year franchise rights. Carlyle Group, an American private equity firm, and Chinese state-owned enterprise Citic recently won the deal to purchase the U.S. fast-food giant's China businesses for $2.08 billion. SEIU warned the deal poses "serious risks" for franchisees. In an analysis published on SEIU's McDonald's China Franchisees Information Centre website, the union explained how the new "master franchisee" could cut support to subfranchisees. "Experience in other markets such as Brazil and Puerto Rico has shown the McDonald's master franchisee model being adopted in Greater China is not in the interests of workers, as it makes it harder for franchisees to provide adequate pay and conditions," SEIU said in a statement. The Hong Kong Confederation of Trade Unions also recently announced its objection to the sale, noting that the high royalties and onerous terms of the deal could have a harmful effect on McDonald's workers.

The British newspaper, The Guardian, reported "alleged shockingly bad conditions" at a garment factory for Ivanka Trump's clothing label in Indonesia. According to an investigation by the newspaper, workers reported conditions like verbal abuse, low pay, unpaid overtime, and extremely high production targets. The Guardian interviewed "more than a dozen workers" at the fashion label's factory in Subang, Indonesia. The newspaper said, "employees describe being paid one of the lowest minimum wages in Asia and there are claims of impossibly high production targets and sporadically compensated overtime." Workers reported they were paid so little they cannot live with their children, described anti-union intimidation and said women were offered a bonus if they didn't take time off while menstruating. "The (Indonesian) workers' complaints come only a week after labour activists investigating possible abuses at a Chinese factory that makes Ivanka Trump shoes disappeared into police custody," The Guardian reported.

Turmoil surrounded Wellington's bus system after bus drivers voted unanimously not to sign any agreement with new employer Tranzit that does not keep their pay and conditions the same. Tramways Union reported the Greater Wellington Regional Council has awarded public transport contracts to Tranzit & Uzabus, which pay bus drivers significantly less than the current provider NZ Bus. According to the union, no agreement has been signed to run the service. But more than 300 drivers and other workers recently met at a stop work meeting and voted to refuse to sign any new employment agreement which cuts their pay and conditions. The company has indicated base rates will increase but extra pay for holidays and weekends would be cancelled. Tramways Union secretary Kevin O'Sullivan said removing penal rates would result in lower pay, and the union was not going to back down on the extra payments, which varied around the region.

Public Service Association hailed the decision of the Auckland Council to adopt a living wage policy that will increase council workers' wages to about $21 an hour in two years. About 2000 people, including those working in Auckland Transport and Watercare, will get the pay rise which is expected to cost $2 million in the first year. PSA delegate Chris Randall said library, leisure and event workers, who now earn just above the minimum wage, would benefit the most from the policy. "It's a good thing in terms of recognising that Auckland in particular is a very costly place to live these days, with the housing crisis and rentals... are very, very high," he said. The current living wage is $20.20 an hour. But the policy does not include contractors which the Living Wage Movement Aotearoa New Zealand criticized. To secure contracts from the council "a lot of those workers are very low paid," said national convener Annie Newman.