More than 95 per cent of 1433 IDEA Services support workers voted to walk off the job in protest of stagnant pay talks. E tū union has been negotiating with IDEA Services, the operational arm of IHC New Zealand, for two new collective employment agreements since October last year. The strike vote was prompted by a March 23rd announcement of planned service cuts by IDEA Services that would affect about five per cent of the disability support staff. E tū advocate Alastair Duncan said IDEA Services needs "to take this vote seriously" as it showed growing anxiety and concern amongst staff. "Support workers at IDEA do a caring and professional job of supporting New Zealanders with intellectual disabilities. Sadly, they have had little support from their employer," Duncan said.

The government should enact legislation to make sure workers in New Zealand employed by a foreign company are working under New Zealand conditions, declared the NZ Council of Trade Unions (CTU). The CTU argued that under current rules, foreign workers can take Kiwi jobs without having to work under New Zealand labour standards. The trade union centre issued the statement in response to an Employment Relations Authority complaint filed by the Rail and Maritime Union (RMU) concerning Chinese workers employed by the Chinese firm, CNR, hired to fix trains sold to KiwiRail. The trains, purchased from China between 2009 and 2013, were found to contain asbestos. The RMU said the jobs should have gone to Kiwis. The union also said minimum wage and other employment standards should have applied to the foreign workers. The authority later dismissed the complaint because the union did not have legal standing. 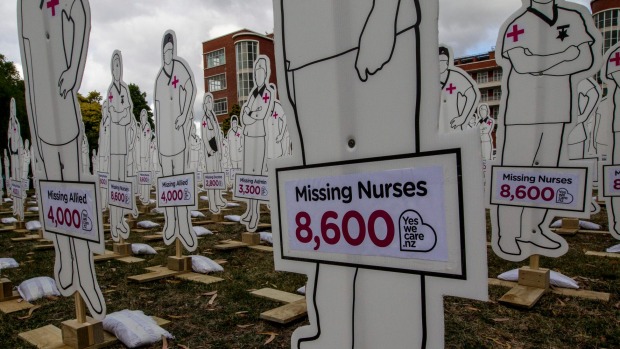 The New Zealand Nurses Organisation (NZNO) released an open letter to the public asking New Zealanders to think of the health care system when they cast a vote this September. "It's getting harder to do the work that we trained for," the union warned in the letter which was released to coincide with the NZNO regional conventions held the week of April 3. "Health underfunding means that sometimes we're not able to give you the best. We are often short-staffed, rushed, and need a little more time to give you care," the letter said. "We are sad sometimes because of what we couldn't do for your tamariki, your grandparents or your neighbour. Many of you are feeling frustrated by delays in getting the healthcare you deserve and expect. We are frustrated, too." The letter didn't name any political parties but made clear the National-led government is not adequately funding the system. The "lack of funding" in primary health, iwi and Maori providers and DHBs was having a "negative ripple effect" at hospitals, "where people are queuing up for help," said NZNO President Grant Brookes.

Civil Contractors New Zealand (CCNZ) said the construction industry will need another 30,000 workers by 2019 because not enough people are entering the building trades. Construction is expected to grow by 4.7 per cent, twice the national job growth rate by 2019. One in five new jobs created between 2016 and 2019 would be in construction, according Business, Innovation and Employment Ministry forecasts. Recent Statistics NZ data also highlighted the labour crunch in construction. Almost 80 per cent of construction firms reported vacancies last year and nearly 60 per cent said they had "hard-to-fill" vacancies, according to Statistics NZ. "We need more skilled workers and the reality is that a lot of the training will need to be done on the job, which means that people can earn as they learn," said Civil Contractors chief executive Peter Silcock. His group, he said, was heavily involved in training and recruiting a more diverse workforce. Silcock reported that the construction industry is changing because of more technology and innovation. More women also are entering the skilled trades and more training is being offered.

The Labour and Green Parties agreed to a set of budget rules that included a commitment to run surpluses every year should they form a coalition government after the September election. Party leaders said the "Budget Responsibility Rules," which were developed with input from economists and experienced bureaucrats, "will give voters confidence" about how an alternative government would handle the economy. But the Council of Trade Unions declared that higher spending is needed under the agreement. "We support higher levels of Government activity and investment than these rules permit. There is an urgent need. Many countries who are more successful than us socially and economically have much greater government activity," CTU president Richard Wagstaff said. "If an incoming Labour/Green Government is serious about fixing the problems we have in our education, health, housing and other public services, if it's going to correct the imbalances we have in terms of pay equity, if we are going to really tackle income inequality and our environmental challenges together as a nation, then it will need to be prepared to invest significantly. That will test these rules as they stand." The set of economic rules were presented by Labour leader Andrew Little, finance spokesman Grant Robertson, and Green Party co-leader James Shaw.

Optimism about the general economic outlook fell to a seasonally adjusted 16 per cent in the three months in March, compared with 26 per cent the previous quarter, said the Institute of Economic Research (NZIER). "The decrease in confidence comes despite businesses reporting their own activity holding firm, suggesting annual growth in the New Zealand economy will remain solid around 3 per cent over the coming quarters," said NZIER senior economist Christina Leung. Businesses said they were finding it harder to get staff, and inflation pressures forced businesses to pass on high costs to customers. Construction is regarded as the driver of growth and is the "most optimistic" sector. "Along with increasing capacity pressures that we're seeing particularly in the building sector, it does suggest a higher lift in inflation over the coming year," said Leung.

One day after the workers staged a walkout to demand wage increases, leatherworkers at Louie Vuitton ateliers in France agreed to extend collective negotiations. On April 5, scores of highly skilled workers conducted an hour-long walkout for the first time in 15 years. Union representatives from Force Ouvrière and the Confédération Française Démocratique du Travail told the news media that the workers engaged in the protest after a wage increase offer from Louis Vuitton management failed to meet expectations. According to the union representatives, the company had offered a gross raise of 30 euros a month, or about $31.95, for every employee while another 80 per cent of workers were offered additional raises of €10 to €20 a month. Force Ouvrière representative, Jean-Marc Damelincourt said workers want "a remuneration worthy of our commitment." LVMH Moët Hennessy Louis Vuitton, the largest luxury group in the world by sales, posted record results in 2016 with total sales of €37 billion.

Canada's proposed budget pledges to strengthen the trade remedy process, but more must be done to protect jobs, declared the United Steelworkers. "We welcome the government's commitment to modernize Canada's trade remedy system and enhance the right of trade unions to participate in the trade remedy process. But unions must also be able to file anti-dumping and countervailing duty complaints, a right that unions have in other countries such as the United States," said United Steelworkers' Canada National Director Ken Neumann. He also called attention to "the looming crisis" in softwood lumber, which should have been addressed in the budget. "The budget could have taken concrete steps to put communities first by committing to provide federal loan guarantees to industry in the face of potentially punishing tariffs from the United States," Neumann said.

U.S. workers at Nestlé's logistics and shipping center in McDonough, Georgia, voted April 8 to join the Retail, Wholesale, Department Story Union (RWDSU) in an election supervised by the National Labour Relations Board. The union won the right to represent 102 workers in an anti-union area of the country and in the face of a series of natural disasters in the region. "These workers have been through a lot in the past few months both personally and at work and it is time that their voices are heard and that they are treated both respectfully and fairly by Nestlé," said Stuart Appelbaum, President, Retail, Wholesale & Department Store Union (RWDSU). "Nestlé's workers deserve a strong union voice at the bargaining table and we are proud to be representing the 102 workers in McDonough, Georgia, as we work to secure a fair contract." Edgar Fields, President of the Southeast Council, RWDSU added, "Neither union-busting efforts nor flood and gale-force winds could deter these workers from defending their right to organize and now it's our turn to fight for them. We are ready."

More than 1000 staff at the University of Auckland walked off their jobs March 16 over demands for higher pay. The Tertiary Education Union said the strike was a last-resort action to get the vice-chancellor to agree to a 1.2 per cent pay rise this year, followed by a $1200 increase next year or $3500 for those at the bottom of the pay scale. According to TEU spokesperson Josanne Blyth, bargaining with the university has been going on for the past nine months. She said the union seeks to close the pay gap between lower and higher paid staff which has widened over the past 20 years. The university is demanding a flat rate increase of $1200 and the union wants to redistribute pay to allow lower paid workers to get a bigger increase. "A lot of those people are on wages they struggle with. This is an institute that teaches equity, we have students working here - it's about them seeing that this institution can treat people fairly," she said. 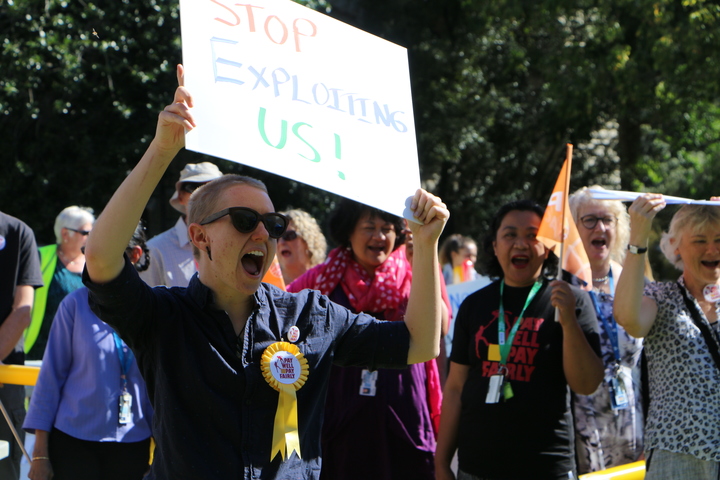 About 70 supporters from the Auckland community joined distribution centre workers at BNT (Brakes and Transmission), the Australian-owned car parts supplier, on the picket line March 29 in their sixth round of strike action. "Our members were blown away," said FIRST Union organiser Emir Hodzic. "It's really encouraging to know that the local community supports our fight for better wages and conditions." Hodzic accused the company of dragging negotiations out for months and is one of the poorest-paying employers in the industry. He noted that a month ago the Australian-based chief executive described the ongoing strike action at the company as a "pimple on a pumpkin." "Our members want to get the job done, but that's becoming harder and harder as their wages and conditions fall further and further behind their colleagues at other distribution centres in Auckland," said Hodzic. "If BNT wants to clear the backlog, if they want to get products to customers faster, the solution is pretty simple. Get back to the bargaining table. Offer distribution centre workers a wage they can support their families on."