On the 4th of August the Employment Court released its first judgment on ‘availability provisions’ in employment agreements. This judgment was eagerly awaited by unions, companies, HR and employment lawyers as it is the first guidance by the court on the correct interpretation of ss 67C & 67D of the Employment Relations Act. These sections, among others, were added by amendment under the Employment Standards Bill 2015. Those two sections are the operative sections that ban zero-hour contracts. 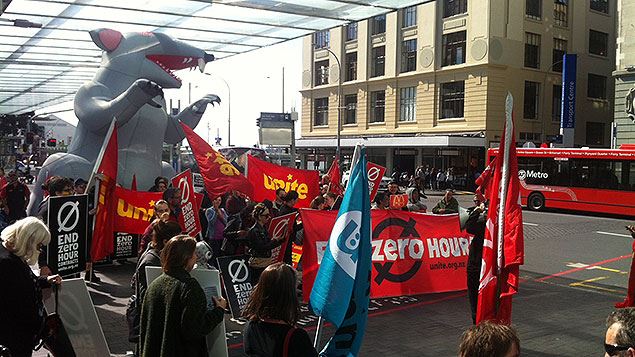 Protest against zero hour contracts during 2015 negotiations. Court case this year followed the law change to ban such contacts.

The Employment Court case turned on the facts. Both parties put up evidence that was necessarily contradictory. The workers claimed that they could be rostered and expected to work at any time within their availability while the company claimed that it did not force people to work hours that they did not want to. One company witness cited in the judgement even claimed that “In all honesty, I can’t think of an occasion when we’ve required workers to come in to work if they say they can’t, even if the work is part of their minimum hours (security of hours). We usually just get other people to cover.” This is not the environment many workers at McDonald’s will recognise but we weren’t able to convince the court of that fact.

The court rejected a ‘black-letter-law approach to the wording’[1]. It also found that a large amount of availability relative to guaranteed hours would be of mutual benefit to employer and employee as workers were “young and transitory”.[2] We reject this finding, as it necessarily disadvantages the many fast food workers who are not young or transitory.

The court seemed to take the approach that the exploitative situation the union was describing was beyond belief, ignoring the realities of the many workers in these situations in New Zealand.[3] Further that the employer simply could not operate its business this way as workers would just no-show. This contradicts one of the purposes of the Employment Relations Act – to address the inherent inequality of power in employment relationships.

The big win for the union, and workers in general, is that the ruling is based on McDonald’s description of the facts. McDonald’s insisted that it did not require workers to perform work above their guaranteed hours, and never had.[4] For example the court also accepted that ‘unable to work’ was more properly understood as ‘unwilling’.[5]

The decision also made it clear that companies that impose an availability on their staff unilaterally and require them to work beyond their minimum hours need to pay for that availability.

Unite went into this case confident that a clear interpretation of the employment agreements and the new legislation would result in a win for workers. McDonald’s testified, and the court agreed, that a literal interpretation was too oppressive to be real. They, and other employers, will now be held to that.

The Full judgement is available here.