I have just returned from an overseas trip that took me to Ireland, the UK, and US.

It became what could be called a “working holiday” as unionists in all three countries were keen to hear how we defeated zero-hour contracts in New Zealand and in earlier years organised fast food workers into a union – a task they are at only the beginning stages.

This trip confirmed to me that there is deep radicalisation happening across the world that is affecting broad sectors of the population – but especially the young and in working class communities. 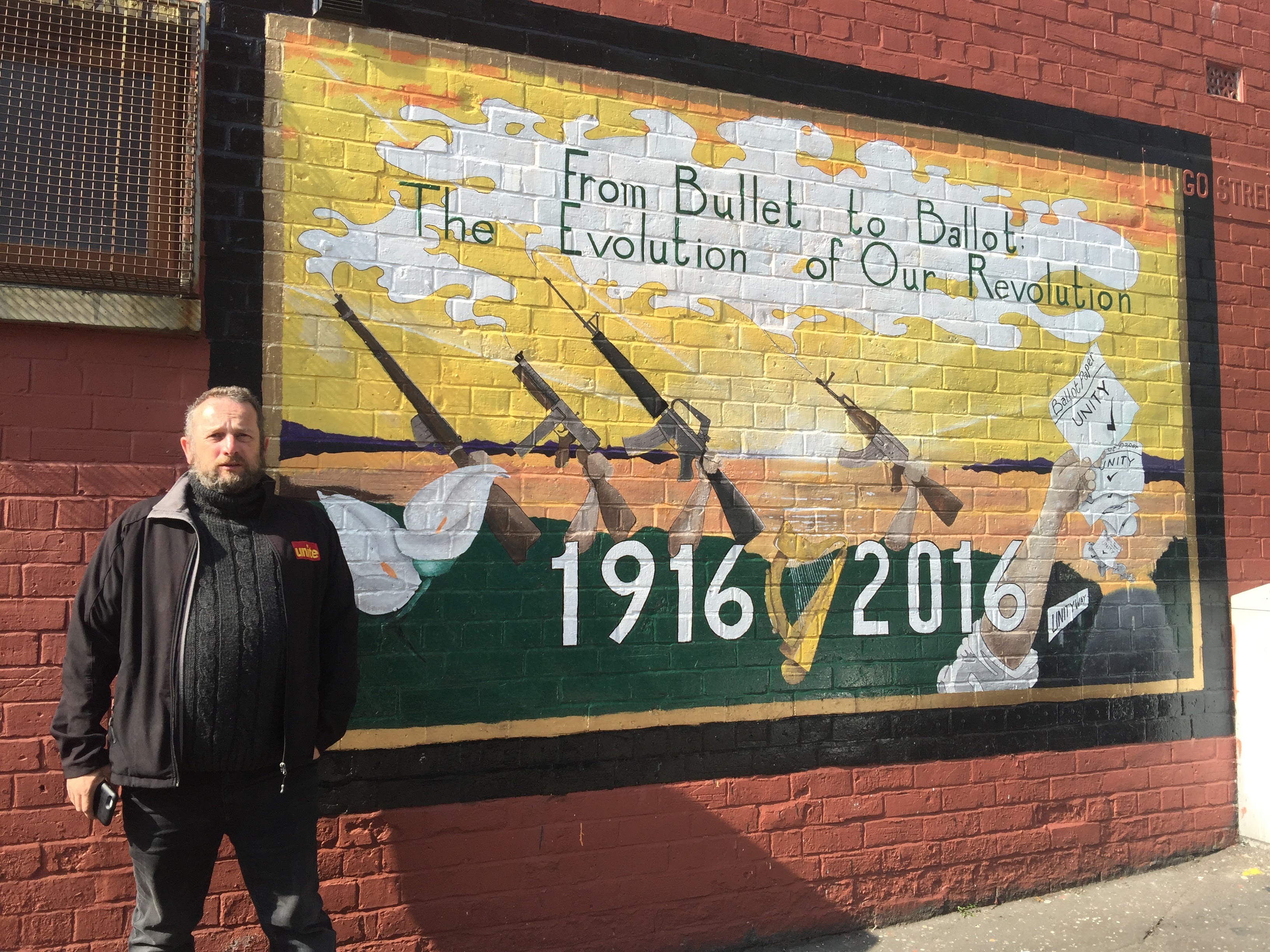 I arrived in Ireland on April 21, just in time for the Sinn Féin Ard Fheis or annual conference. About 3,000 delegates attended the conference, which was held on the weekend of the centenary of the 1916 Easter Rising.

Sinn Féin has become the de facto main opposition party since the February election gave them 14% of the vote and 23 seats. The two traditional government parties Fine Gael and Fianna Fáil got 25 and 24 percent respectively. Both parties have been servants of the wealthy elites who have dominated Irish politics since independence was won for most of Ireland in 1922. Sinn Féin is also one of the largest parties in the North of Ireland that remains under British rule. 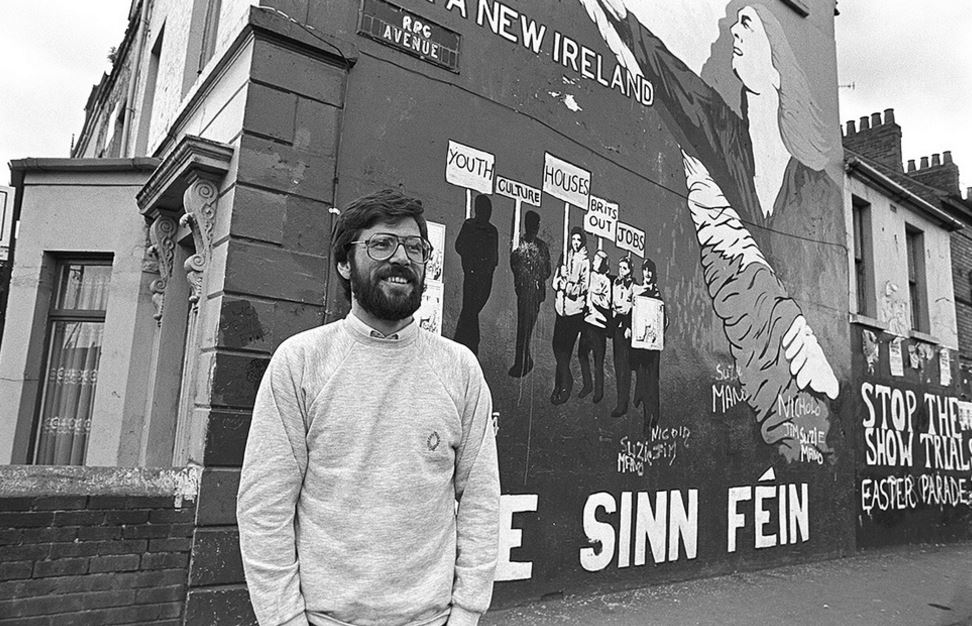 The election result was a humiliating defeat for the outgoing coalition government between Fine Gael and the Labour Party which lost 27 and 30 seats respectively. Labour, in particular, was punished for helping preside over a right-wing austerity programme and has been reduced to the status of a minor party with seven seats.

Fianna Fáil, which is traditionally been seen as more sympathetic to the plight of working people and in the past was responsible for elements of the welfare state that exists, recovered somewhat but remained far from its previous heights. In power more often than not since 1932, it went from over 40% of the vote to just 17.5% in the 2011 election after the world capitalist crisis engulfed that country in 2008. Its recovery this year was modest.

Because neither major party commanded a majority on their own Fianna Fáil have decided to prop up a Fine Gael led government for at least a few years to protect capitalist stability.

Opposition to the austerity programme being imposed on working people in Ireland has focussed on opposition to water charges being imposed on all households. This erupted into a mass movement involving huge demonstrations in every city and town as well as widespread civil disobedience, including refusing to pay water charges and stopping the installation of water meters.

More radical left forces have taken the lead in these protests and were rewarded with the election of at least ten MPs. Two activist anti-austerity groups – Anti-Austerity Alliance (AAA) and People Before Profit (PBP) won three seats each. AAA is led by the Socialist Party and PBP by theSocialist Workers Party. Both parties seem to be working hard to root themselves in working class communities and struggles and seem to be trying to break out of the sectarian shibboleths that have prevented radical left forces achieving mass support in the past.

In the Republic of Ireland, Sinn Féin also situates itself on the anti-austerity left. The conference I attended emphasised the unfinished character of the 1916 Rising and often referred to the Irish socialist and union leader James Connelly who was among the 16 people executed by the British following the bloody suppression of the revolt. 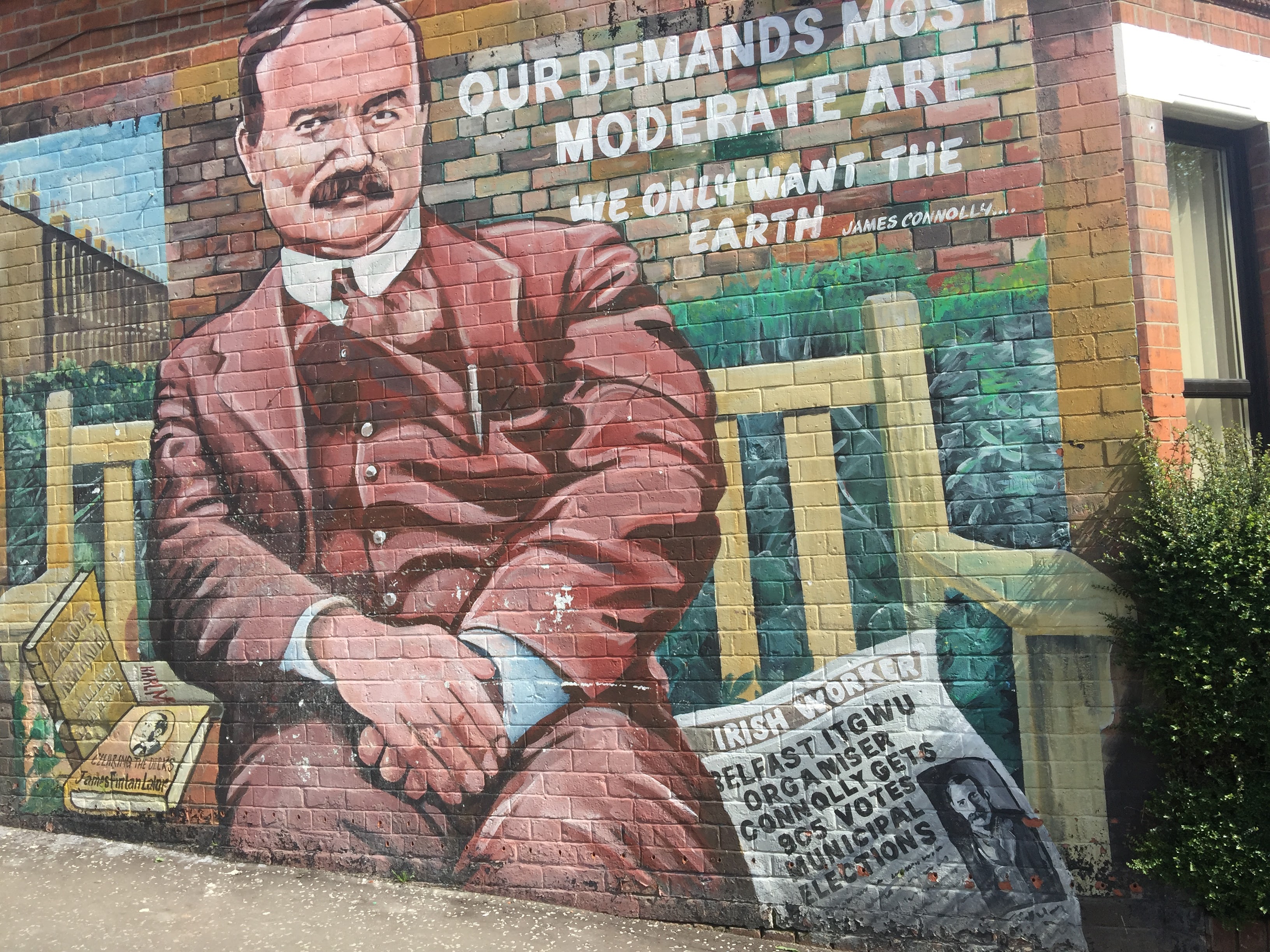 Mural celebrating the life of James Connolly, Irish socialist leader in 1916 rebellion executed by the British

A major feature of the conference was the ongoing housing crisis and massive growth in homelessness.

Ireland in the 1990s and 2000s underwent a boom associated with foreign investment and a massive extension of credit for businesses and homes that fed into a speculative property bubble. The 2008 world financial crisis burst the bubble and the entire banking system virtually collapsed overnight. A savage austerity programme was imposed on working people to pay to “rescue” the banks and pay back hundreds of billions of dollars owed to foreign investors and lenders. A recession was turned into a depression for working people with official unemployment rates hitting 15% in 2012.

Thousands of people lost their homes. Thousands of bankrupt properties were taken over by the National Asset Management Agency (NAMA) who are now selling off these properties at bargain basement prices to speculators and international vulture funds who then evict tenants and jack up prices as soon as a recovery began. People who have lived in properties for years and never missed a payment are just being told they must leave.

The anger in the Republic of Ireland is palpable. Tens of thousands participated in the celebrations of the 1916 rising and more than one person was happy to volunteer that a new rising was needed to fulfil the dreams of the Republics founders. James Connolly’s great-grandson was the featured speaker at the Sunday celebration of the rising outside the CPO in Dublin and delivered a powerful indictment of the current misleaders of the republic and the need to return to the teachings of his forbear. A similar speech from earlier this year can be watched here.

Unite Union and its “End Zero Hours” banner got to be present on May Day marches in Dublin and Belfast as one was held on Saturday, April 30 and the other on May 1 itself. We received a warm welcome from participants and organisers. 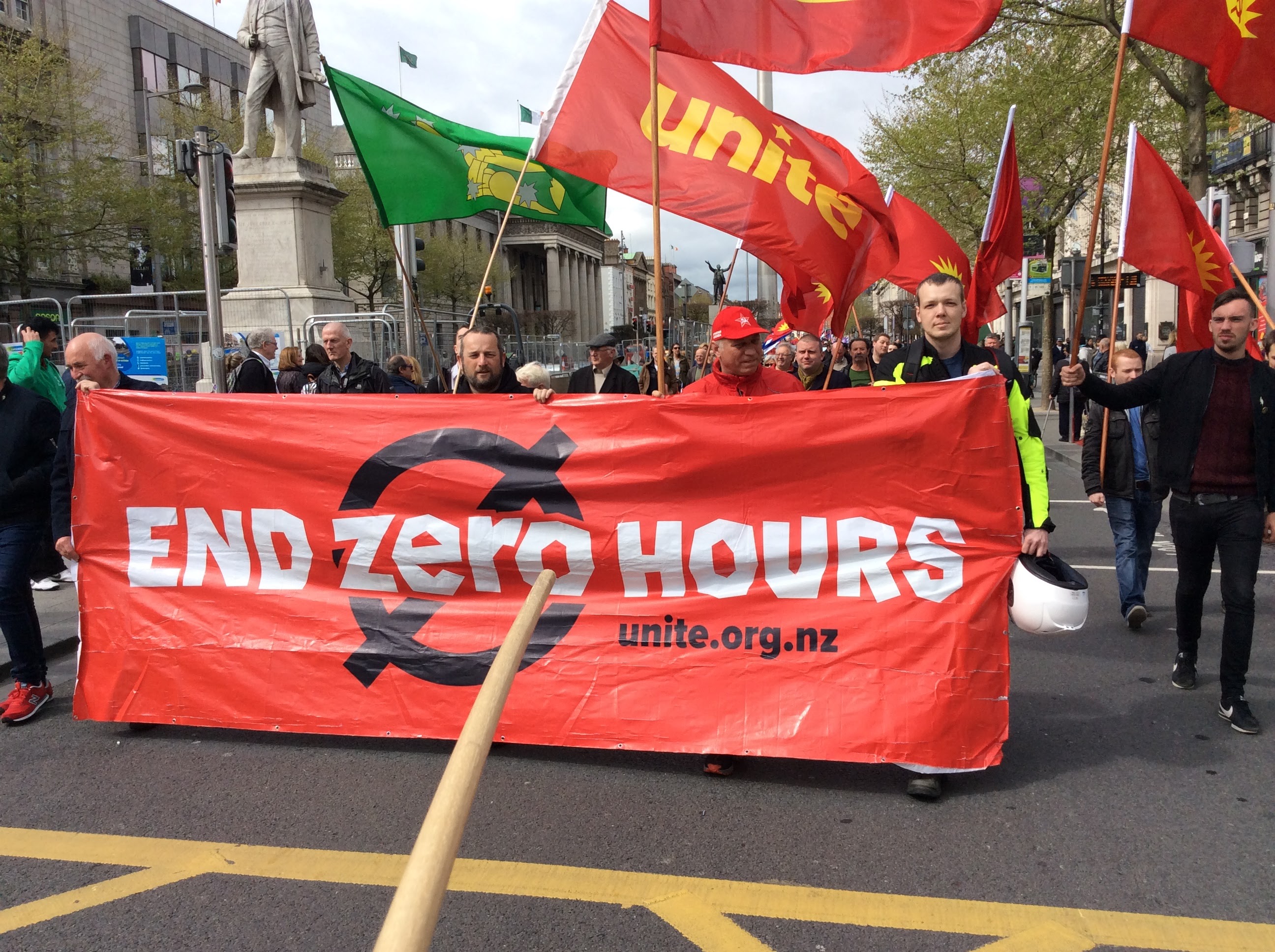 A group of unionists in Dublin also organised a meeting where I was able to speak along with my travelling companion Irish socialist and Unite Union organiser Joe Carolan. Prominent Irish union leader Brendan Ogle chaired the meeting. Irish workers involved in struggle in the retail sector made it clear that the scourge of zero hour contracts was alive and well in that country and needed to be fought.

Last week Joe Carolan was invited to the parliament in the Republic of Ireland to talk about how we defeated zero hour contracts in New Zealand.

But there have been similar exciting developments in the North of Ireland. As a consequence of the 1998 peace accord bringing an end to open armed conflict between republican forces and the British occupation forces and their “loyalist” allies, there has been a multi-party government in theNorthern Ireland Assembly between the previous mortal enemies Sinn Féin and the Democratic Unionist Party (DUP). Failure to agree led to an almost 5-year suspension of the assembly from 2002 to 2007.

Because the Assembly budget largely depends on the UK government it is effectively imposing an austerity regime on the people of Northern Ireland. Sinn Féin argues that they have fought to moderate the cuts and have preserved free health care and free prescriptions for example. They also believe that the coalition government has effectively ended the viciously sectarian ant-catholic state that had existed for decades earlier. Sinn Féin leader Martin McGuinness acts as deputy first minister of the North of Ireland government.

But in working class communities in the majority Catholic areas of West Belfast and Derry there has been a rise of a left opposition force centred on the People before Profit alliance that won two seats in the May 5 election held while Joe Carolan and I were visiting the North.

The North uses a multi-seat transferable vote system like is used in the Republic of Ireland. In the North, each of the 18 electorates has six seats. To be elected you need the votes that equal the number of people who voted in the electorate divided by seven plus one. If you have surplus votes these are then distributed to others according to the preferences indicated on the ballot. Bottom-placed candidates are eliminated until six candidates have the required votes.

West Belfast has been a Sinn Fein stronghold since the hunger striker Bobby Sands stood and won the British parliamentary seat for the area in 1981. Sinn Fein leader Gerry Adams also won the seat after Sands’ death. Adams is now a member of the Republic’s parliament for Dundalk and the party leader for all of Ireland. Martin McGuinness was also a member of the Northern Ireland assembly for West Belfast before shifting to Foyle for this year’s election.

Veteran civil rights campaigner and socialist Eamonn McCann won a seat in Foyle with the support of Bernadette Devlin McAliskey as his campaign manager. It was a great pleasure to meet Bernadette out campaigning because she was one of my heroes in my younger days after she won election to the British parliament in 1969 as a 21-year old and then punched Reginald Maulding the British Home Secretary in the face when he abused the civil rights protestors murdered by British forces in Derry in 1972. 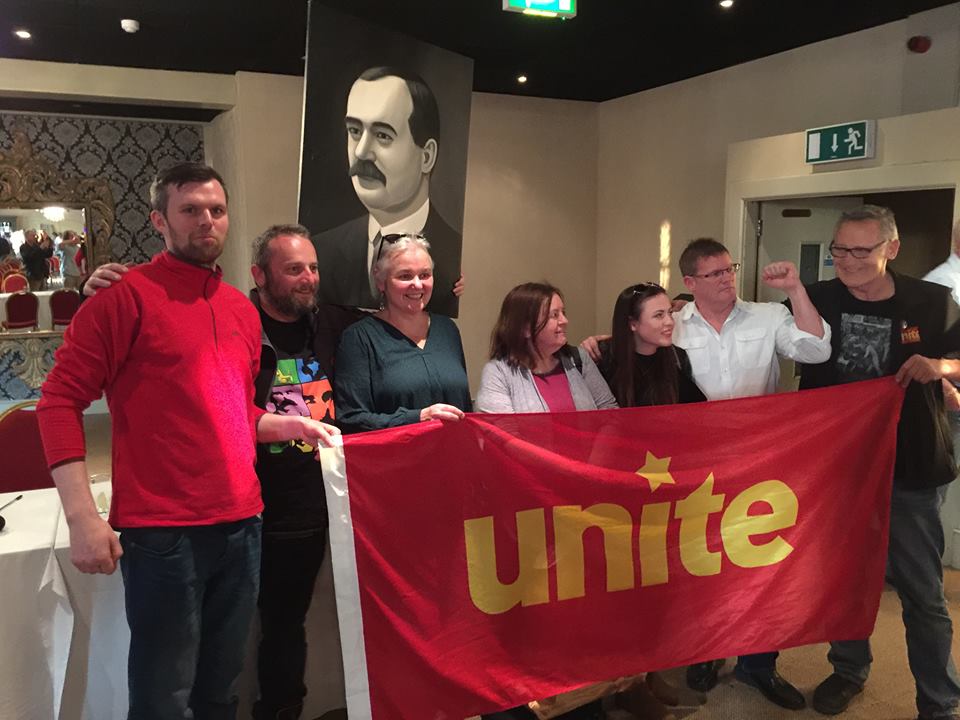 McCann and Devlin feature strongly in movies chronicling the Irish civil rights struggle from the late 1960s, including the dramatisation Bloody Sunday. Devlin McAlisky and her husband were shot in front of their children in 1981. Bernadette was hit 14 times! It is a fantastic testament to their courage and determination that they remain leaders today.

Alongside the 73-year-old McCann People Before Profit’s Gerry Carroll won a seat in West Belfast.

The 28-year old community anti-austerity activist topped the poll by a huge margin.

The establishment was shocked. While only taking two seats it was an electoral earthquake because it directly challenged the entire sectarian framework of politics in the North. The election message was “Neither Green nor Orange but up for the fight”. The socialist candidates consciously sought to take their message to workers in communities other than those considered “Catholic” or “Nationalist”. On taking their seats in the Assembly they also refused to designate themselves by the old sectarian divides and asked to be designated as “Other”.

The Irish are rising again in their millions. Their country is very similar to New Zealand both in population and economic structure. Unfortunately, like Ireland, it looks like the ruling rich of this country are preparing us for a renewed crisis of the system when the property bubble collapses and takes our banks with them. We must be prepared to fight the inevitable attempts to force a new round of austerity on us to save their system from their own crises.

We have been through this once before in the late 1980s and early 1990s. We don’t need to go through the defeats of that period again before we get up off our knees and learn to fight.

(Mike will continue his journey next week)