Apparently working as a mini golf operator or a cat breeder are more dangerous jobs than a dairy or cattle farmer. Well sure, that makes sense. I mean you could take a stray putt to the shins when inspecting hole 8 for water logging, or maybe Felix the one-eyed tabby takes a swipe at your ankle when you try to check him for fleas. Sounds positively life threatening.

Under the new health and safety law wrangling cats and putters are considered more risky than working with 1 tonne plus livestock. Ridiculous. Dairy and cattle farming is one of if not the deadliest industries in New Zealand, claiming a life nearly every three weeks. You won’t find mini-golf death statistics online – I’ve tried. I daresay the government will come to their senses and make the necessary adjustments but this, combined with the exemption on small businesses to have elected health and safety reps, paints a pretty bleak picture for our new workplace safety rules. 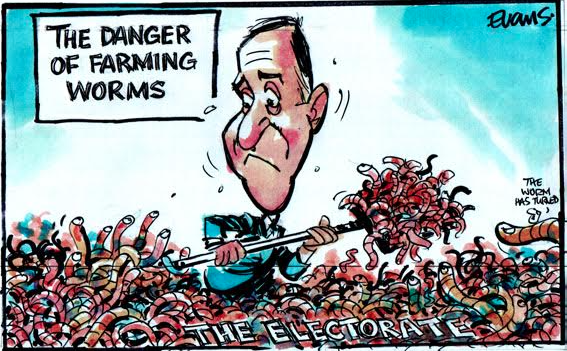 Health and safety legislation isn’t the only employment law getting stripped. Workers’ rights are getting gutted across the park. Employment laws have been steadily deregulated since 2008 when a certain party took over the reins of government. Actually they have been regularly chipped away at since the late 1980s but we got some respite for a few years when the Employment Relations Act was passed in 2000.

So while we got a breather in the early to late 2000s, the National Government resumed their plan in 2008. Since then they have heavily loosened the rules around firing workers (90-day trial), reduced the rights of workers representatives to enter workplaces, weakened workers ability to negotiate collectively for fairer working conditions, pinched our automatic entitlement to breaks, extended the time young workers can be paid less than adults for the same work, made it excessively tough for film workers to get permanent jobs, and much more.

In the very near future we could see Easter Sunday no longer be a day where shops must close, meaning thousands of retail workers won’t be able to look forward to the traditional family holiday. Another bill set to go before parliament soon could see zero hour contracts become entrenched in law by allowing employers to use them if they provide ‘compensation’ for the more unfair aspects of the arrangement – like having your hours chopped last minute. The compensation could be anything.

I call it death by a thousand cuts – on their own these changes seem relatively harmless to the average Joe but when observed together they amount to a vast undermining of workers entitlements and protections.

All of these incisions and punctures are a step towards handing near total control of employment relations to business, corporations and employers. That is the government’s ultimate goal. This is not a conspiracy. It’s in the mission statement. The government is doggedly following an ideologically-driven strategy put forward by the OECD in the early 90s, which advocated for the enhancement of commercial freedom and the mass de-regulation of workers’ rights. The problem is the OECD’s recommendations have not worked as promised and the strategy has been roundly criticised by renowned academics and economists the world over.

Enjoy your current rights while you have them. The government is only just getting started.

Tony Stevens is a social activist who advocates for the rights of young workers. He recently lost his only brother to a malfunctioning mental health system and is desperate for change.