The economy is growing at about 2.5 to 3 percent, but wages are failing to keep up.

Official figures show annual wage increases eased to 1.5 percent in the year to June, and have now been below 2 percent for the last four years.

"This year wage settlements have come in about 2 to 3 percent. But over the last couple of months, we've seen employers pushing wages down to quite low amounts of 1 to 1.5 percent and members are quite unhappy," Unite Union assistant secretary Tom Buckley said. 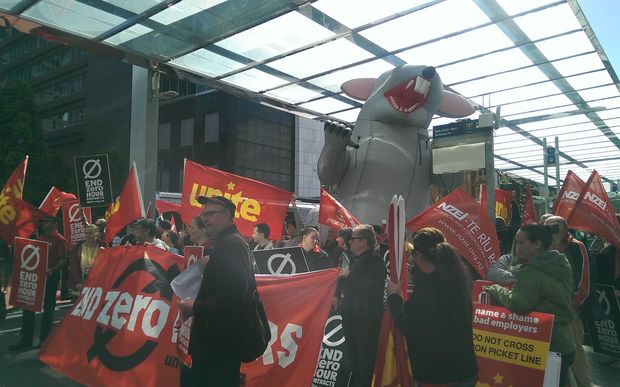 A protest over zero-hour contracts at a McDonalds in Auckland in April last year.

Mr Buckley said in most cases, employers can pay more, but won't.

"Where this is happening, and in many occasions we've seen an increasing amount of it, workers are wanting more and are prepared to take the step to industrial action where needed, to ensure that wage increases can improve."

He said two strike ballots had been taken by Unite workers in the last couple of weeks because the offers were not enough.

Minister for Tertiary Education, Skills and Employment Steven Joyce maintained households were better off because their purchasing power had improved due to even lower inflation of 0.4 percent.

"We have to look at real wages and the purchasing power and certainly in terms of increased dollars in the pocket.

"And those are real positives for peoples' cost of living." Mr Joyce said.

However, Mr Buckley said it was not as simple as that, particularly for low income workers in Auckland struggling under the weight of rising rates, rent and energy bills.

"We're also facing a crisis of housing. The response simply needs to be pay more for people to better afford the housing costs they're confronted with," Mr Buckley said.

ASB senior economist Jane Turner warned that a prolonged period of low wages could work against the economy.

"The softer labour market often reduces turnover and makes people a little bit more cautious in their outlook. And they're less willing to perhaps invest in key big ticket items and that in turn suppresses the economy.

"So the Reserve Bank will be wanting to see a tighter labour market, and a bit of a lift coming through over the coming year," Ms Turner said.

But not all workers are finding it difficult.

"There is definitely upward pressure on wages in roles like project management and quantity surveying, or the skilled tradespeople with experience."

And becoming a politician does have its benefits - they enjoyed a four percent pay rise last year.