By Olive McRae, Organiser in The Deep South!

Those of us that live down South know that it can get pretty cold down here. We have specific problems that I doubt workers in fast food stores in the north have.

For years workers on drive-through one, dishes, or any other tasks in the back area were left to freeze in the low, and even minus, degrees. 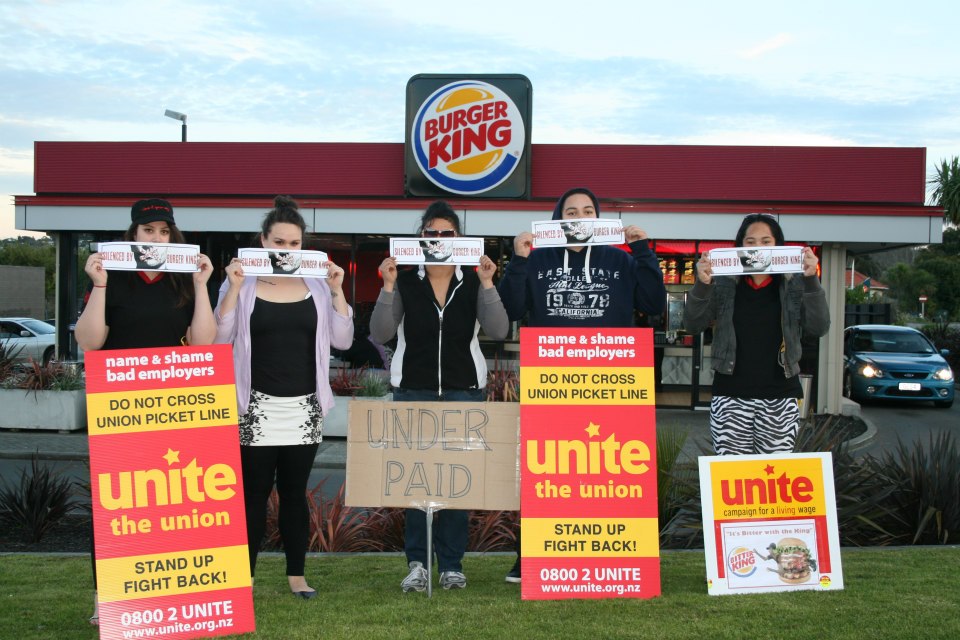 Workers protest outside BK in 2012. BK workers have learnt to stick together.

I have heard members tell me how bitterly cold they are often lately, and we are actively trying to make changes that enable workers to be warm at work!

So he contacted his area manager and told him (not asked, told!) that he needed to shut up shop. Members contacted me to keep the union informed of the action being taken as well.

Being cold is a health and safety issue and workers don't have to put up with it!

Like any time that workers start to organise for their own defense and protection, Burger King took notice pretty fast!

The next day Unite emailed suggested solutions, and I was on site to support members and measure temperature.

I was denied access in the early morning, but with persistence, I was able to monitor the progress of the proposed solution.

The end result being that now workers at Burger King Andy Bay can be warm while they are working, and feel proud that collectively they changed their conditions for the better.

Shortly after emailing members about the situation at this store, I was contacted by members at the Invercargill store to inform me that their hot water ran hot and cold and leaked. In spite of repeated complaints, nothing had been done. By this stage BK head office must have known that workers weren't prepared to put up with bad conditions, and rather than risk the workers shutting up shop they fixed the problem immediately!

The fact is, if you are having an issue at work, chances are it isn't just you!

By working together collectively we can and do make gains!

(Never fear my long suffering Gore workers, I know you're cold and I'm working on it! And remember, you can collectively work on it as well!)