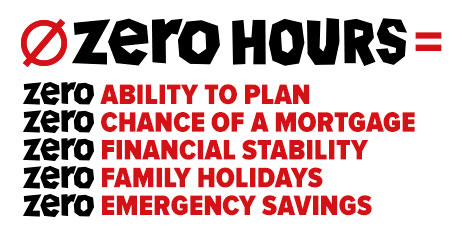 Negotiations with all the major fast food companies on renewing their collective employment agreements with Unite Union were held over the first week of March.

The workers in the industry have told Unite that their priority is the ending of the regime of “zero hour contracts”. This is the situation where workers must be “available” for work when rostered but not guaranteed any hours from week to week.

There has been huge public support for the campaign against zero hour contracts and Campbell Live has adopted the issue as a cause they will be championing.

The week of negotiations they ran three reports focusing on workers stories and then what the government' response was.

Under intense questioning the Minister of Labour Michael Woodhouse conceded that there was an imbalance between the requirement of workers to be available for work and the lack of obligation on employers to actually offer work.

Other claims in the negotiations have to do with improved pay rates, achievable steps off the minimum wage, a clear choice between the collective or individual agreement when starting, rights for delegates to do union work in paid time, noticeboards in stores, better processes around taking leave, better practices when getting breaks and how they are ordered.

Another important claim is for a “pass on payment” to to be paid to union members only to allow companies to “pass on” the same terms and conditions negotiated with the union to non-union staff. Our goal is for that to be at least equal to the fees a member pays. In some companies this is paid to the union to purchase benefits for members which are distributed by the union directly to members. 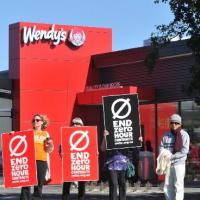 A community picket was held outside the Wendy's store in Dunedin in their opening week to highlight the problems with zero hour contracts. Local Unite organiser Ben Peterson discovered that while the company only needs about 25 staff to run a store they had hired 80 staff to undergo "training" and planned to use their power not to roster work under a zero hours regime to weed staff they don't want.

Negotiations are continuing. Each company is formulating a response.

2015 could be the year we see an end to zero hour contracts!