In a determination of the Employment Relations Authority released yesterday, it was held that Wendy’s was required to offer Rosemary Williams additional hours of work before it hired new staff. It had failed to do so over a 3-month period which disadvantaged Ms Williams and Wendy’s was ordered to pay over $3000 in compensation. 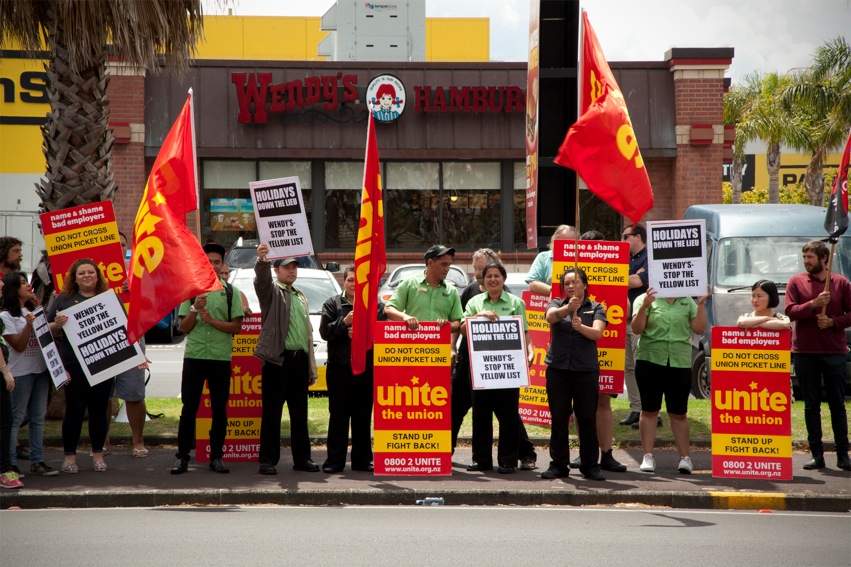 Wendy's worker's picket store in Greenlane, Auckland, during bargaining for a collective agreement.

The Wendy’s store in Hornby, Christchurch suffered a downturn in business last year due to a competitor opening nearby. All the staff in the store had their hours reduced. As staff left their jobs at the store, Wendy’s hired new workers to replace them.

But Unite Union, who represented Ms Williams, argued that the remaining staff should have been offered more work to increase their hours to their previous level.

“It is standard in most of our collective agreements that workers have the opportunity to pick up additional hours before a company hires new staff” says John Crocker, Industrial Officer at Unite.

“Wendy’s was required to offer Ms Williams more hours and failed to do so. The determination is very clear on that. While this case was contractual, we believe it should be standard practice for all employers in New Zealand.

“Hours are worker’s livelihood, and the ability to keep those hours down is power over those workers.

“While the compensation to Ms Williams was modest, the principle that the union will enforce its employment contract, particularly on this issue, was vital and we hope it sends a message to the broader industry.”