Lies, Damned Lies and Statistics: the truth about the “rock star economy”

Lies, Damned Lies and Statistics: the truth about the “rock star economy”

The business media is all in an excited state over the fact that the headline growth rate for the New Zealand economy is at 3.6% for the year ending June.

What they don't tell you is that because of the artificial boost to the population as a result of the government opening the taps for new migrants the actual annual per capita growth rate is only 0.7%.

"We are seeing low-quality growth in what New Zealand produces," says CTU Economist Bill Rosenberg commenting on the June GDP growth statistics released today. "Not all growth is equal." 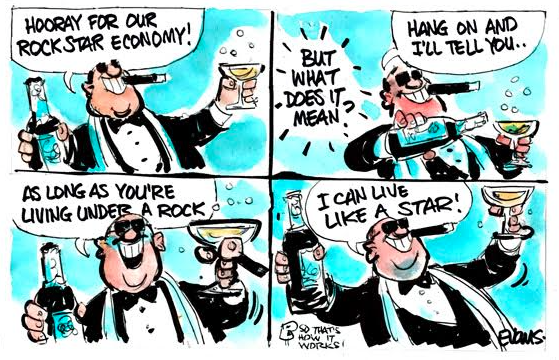 The economy has also had a boost through the renewed growth in New Zealand household borrowing. At 163% New Zealand has now surpassed the household debt to income ratio record achieved just before the world financial crisis in 2008-10.

The government has also significantly expanded the number of tourists being admitted from China by easing the visa requirements significantly. This adds to spending and the extra demand on the tourist sector is accommodated through relaxing temporary work visas.

There is more spending, more hours being worked and more production in the economy as a consequence but it is shallow. There is no productivity increase. There is no increase in incomes for workers.

The wealth being created is being siphoned off by those at the top.

The government’s policies are continuing to feed the asset bubble in housing which is creating a dangerous threat hanging over the whole economy when it comes crashing down. The longer a bubble is inflated the bigger the crash that follows will be.