The Labour Party’s decision to go back to the official policy of not making any changes to any taxes until they have been presented prior to the next election was the only choice they could make – given the hole they had dug for themselves.

This was actually the policy announced earlier in the year by Andrew Little. He argued that the current system was completely unfair and needed a complete overhaul. That is demonstrably true. Working people in this country are heavily taxed compared to the owners of accumulated wealth. 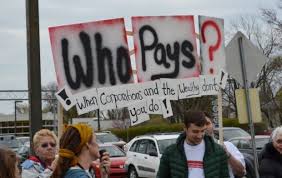 The second part of the Labour Party argument which I don’t accept was that this could only be done once they were in government.

There are a whole array of changes that could be implemented to make the system fairer. There could be higher marginal rates applied for those on very high income. There could be capital gains taxes, higher company taxes, abolishing tax write-offs available to those receiving income from shares, wealth taxes, death duties brought back. We could also look a financial transaction taxes as an alternative to the regressive GST.

None of these need to be scary to people if the package clearly shows that the net result is that the big majority of working people paid less tax and received higher incomes while the wealthy paid their share of taxes for the first time.

The Labour feared being dubbed the “tax and spend” party. The Party leaders seem to fear of losing the approval of the business class and the right-wing economists and commentators they pay for than they do in disappointing their own supporters.

The Labour Party plan was to suck the oxygen out of the accusations by promising no new taxes before the next election.

Whatever its merits or lack of them, that was Labour’s strategy. But for some reason, it was all thrown into chaos by a comment from the new party leader Jacinda Adern that they may have to bring in the capital gains tax earlier to deal with the housing crisis. I think it was a throw-away line that she felt she couldn’t resile from afterwards for some reason.

That opened the door to a frenetic assault by the National Party and every reactionary commentator in the country to claim Labour was planning a whole new range of taxes that would hurt the 60% of families that own their own homes and the many others who directly or indirectly have virtually all their savings in housing in some form.

Capital Gains Taxes will be needed in some form. But they can only be introduced as part of a rejig of the whole unfair taxation system that clearly changes the weight of tax burden from working people to the rich.

The problem here is that Jacinda’s comment overturned the whole strategy that had been prepared for the election that claimed Labour was “fiscally responsible”. Proof of that was that they would only promise to tax and spend what the current government was already planning to tax and spend for.  This included only using the numbers Treasury gives them, continuing to run budget surpluses and reducing the government debt, not increasing the size of the government relative to the economy as a whole, and no new taxes.

But Labour needed some extra money for their spending plans so they announced they would cancel the $2 billion a year tax cut promised by the National Party next year. This tax cut did disproportionately benefit the rich with $400 million of that cut going to the top 10% of earners. But the other $1.6 billion would go mostly to working people on average or low incomes.

Telling those people they have to wait three years for any tax relief is obviously a risky strategy.

The middle-class leaders of the Labour Party do not feel the deep resentment working people have to being taxed to death and then having charges imposed on us for things that should be free – like health and education.

But even with the income from the tax cuts, there are huge unfunded, unmet needs in a whole range of areas that can’t be properly dealt with when there are no other revenue sources.

This is where the allegations of there being a “hole” in Labour’s budget projections have some merit even though Finance Minister Steven Joyce’s claims that spending was not being accounted for in the draft budget projections was not true.

But in Labour’s budget, there is much that can only be dubbed smoke and mirrors.

In the Treasury projections, there was $11.7 billion in unallocated spending over the next three years. This was to cover future demands from population growth or new spending plans for the entire government budget. What Labour did was simply reduce that number to $4.5 billion and allocate $7.2 billion to two particular areas – health and education. This means that for every other area of government expenditure there is around $1 billion a year in total being made available for additional demand or new expenditure. That is virtually zero when we are talking about the overall expenditure of the government of around $80 billion a year with Social Welfare a third of that.

Where is the money for all the pay increases that are long overdue in many sectors? How can we end the punitive regime being run by WINZ to stop people getting their rightful access to support if there is no funding available for the benefits that should be being paid to people now?

It is quite likely that the very modest improvements that are being promised in Health and Education will be paid for by a severe austerity regime in every other area of government expenditure.

That is the inevitable consequences of “fiscal responsibility” and not proposing any new taxes on the very wealthy.

It would have been better if the Labour Party in New Zealand had gone to the electorate with a costed tax and benefit plan like the UK Labour Party did. Their budget included tax increases for the rich and companies as part of an overall much fairer tax system. They told everyone who would pay more and who would pay less. Their plan was welcomed enthusiastically by millions.

The Labour Party in this country has accomplished a generation change in the party leadership that the people are enthusiastically welcoming. They are investing in that change their hopes that it represents a genuine change in direction. If that leadership change could be matched by a vision of how society could be run – “for the many, not the few” as the UK Labour Party slogan encapsulated – that hope could become something meaningful.