Well, I made it to Paris, and after finding and settling into the place I’m staying in the 5th arrondissement, I headed out for my first mission to le Bourget, the giant aircraft hangar where the official conference has been ongoing since Monday. This is the 21st meeting of governments since these climate talkfests began.

I hadn’t seen much of the state of emergency until I got to Le Bourget train station, where conference attendees take busses to the conference centre. Hundreds of police officers were walking around the place, many armed with machine guns.

The official conference centre is split into two zones. One zone for the negotiations themselves and another zone for the most well behaved of civil society and green business, The Green Zone. I don’t have a pass to get into the actual negotiating centre (the Blue Zone) until Monday, so I spent the first two days in the Green Zone where the NGO’s hold side events and the fluffy looking end of green businesses get to showcase their solutions for saving the world they’re killing. Wandering around it’s difficult to see where the NGO’s start and the business begins. It’s pretty much a trade show.

According to Corporate Europe Observatory “Among the twenty companies on the initial sponsors list are Air France – an airline opposed to emissions reductions in the aviation sector, car manufacturers Renault-Nissan, and Suez Environment – known for its pro-fracking lobbying. Most of these companies are big emitters of the very greenhouse gases responsible for climate change, such as EDF or Engie whose coal plants alone are equivalent to nearly half of France’s entire emissions.” In May, it was controversially announced that French fashion house Louis Vuitton was to be the first major sponsor of the conference.

These guys reckon they’ve got it covered.Another area of the Green Zone is the Solutions 21 area, the biggest space available where mainly white men sit around corporate-splaining at what looks like some sort of News Desk. This is part of the ‘Solutions COP21’, a huge corporate-sponsored expo coinciding with the Paris climate talks where “€75K gets you 30m² exhibition space, “Privileged access” to the press room at the Grand Palais and 5 VIP badges to ‘Solutions COP21’ “communications and networking areas at Le Bourget and the Grand Palais” so your company can schmooze your way to climate credibility.

It’s all about the palettes this yearAs part of this year’s theme, there are brand new palettes everywhere. Palette tables. palette chairs. palette indoor garden boxes. Some painted green, some orange, most unfinished. Macbooks everywhere, eager looking young people, most with American accents drinking coffee out of special plastic UNFCCC cups they bought. It’s like some sort of youth career fair – the professional tip of the climate movement and it seems delighted to be sharing a home with big businesses. A far cry from the student uprisings of 68′. 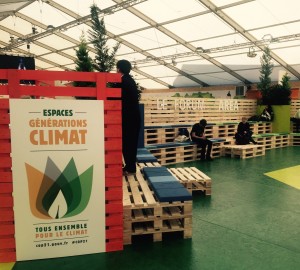 Squabbling over the semantics of genocide

Most controversially, the language of human rights and justice for those most vulnerable to both the effects of climate change (and the terribly unjust and ineffective policy mechanisms of the UNFCCC) is being squabbled over, with some countries blocking it’s inclusion in the operational text of the agreement.

In other words, not only have governments already promised that any deal reached WILL be one that threatens all life on earth – but they are now arguing over whether any recognition of human rights should be included in this deal. It’s a bizarre situation to say the least.

The good bits of civil society

On the positive side, for the elements of civil society that are focussed on action in the real world, the Green Zone provides a useful space for networking and developing plans for action. The most interesting and genuinely useful two spaces for me were the ITUC Trade Union space where meetings were running non-stop and the indigenous space where the Pasifika Indigenous Network was launched on Thursday afternoon.

I’m leaving the circus for now, to connect with the real world where these elements of civil society are holding side events at the People’s Climate Summit over the weekend.

For further insight, I recommend reading Kevin Smith’s analysis of the situation – LINK