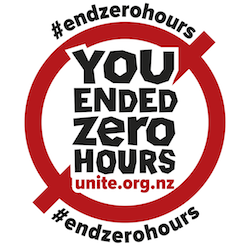 Last year we got rid of zero hour contracts in major fast food, cinema and hotel chains as well as at SkyCity casino. This year the politicians caught up and abolished them for all workers. This is a major victory for low paid workers and has been recognised (and given hope to workers) all around the world.

There are plenty of people and groups taking credit for the win. Thats fine by us, but we wanted to have our own celebration to recognise and thank all the people who did the ground work for the campaign.

Like all meaningful social change this wasn't 'given'. It was fought for and earned, particularly by Unite Union members who courageously stood up, told their stories to the nation and demanded a better deal from their employers.

We want to thank those workers and others who supported them last year when we convinced the nation that zero hour contracts simply had to go.

That's why we are sending you this invitation. We'll provide the food (BYO alcoholic refreshments).

We would love to have you join with us next Wednesday to celebrate.