Many of the measures being proposed involve a reversion to a type of economic intervention common in the immediate post world war two era but which fell into disrepute under the free-market fundamentalism that largely governed economic thought through the 1980s and 1990s.

These measures involve government led-spending to protect working people’s living standards and having the state invest in social and economic infrastructure if the private sector is reluctant to do so.

This has been combined with a new concern about inequality worldwide. Previously conservative international economic institutions like the OECD are suddenly arguing that reducing inequality will be good for the economy after arguing the opposite for decades.

The entire economics profession appears paralysed. The 2008 Great Recession brought home the fact that the emperor had no clothes. The “theories” – actually simple apologies for the system – were abandoned in the face of threats of economic collapse.

Reserve Banks which had been given “independence” from governments so they could run “tight money” regimes to prevent the scourge of inflation returning were suddenly printing money almost without limit to avert disaster. Governments abandoned arguments in favour of fiscal prudence and the need for budgetary surpluses in favour of deficit spending and accumulating debt.

The New Zealand government was lucky in one sense. The previous Labour Government had been so fiscally “prudent” that it had run surplus budgets every year for nine years and reduced the government debt to extremely low levels by international standards. This gave the incoming National Government plenty of opportunity to borrow without triggering too many alarm bells in the international debt markets. Borrowing costs remained modest.

The “surplus” obsession would have been a massive drag on the economy if it had not been for the explosion of private debt. Banks expanded loans massively to feed credit cards, mortgages, farms debt and business loans. Private sector credit grew by 600% over the two decades to 2009 – from $44 billion in 1998 to $266 billion in 2008. Much of this was financed by overseas borrowing by NZ banks.

Of New Zealand’s overseas debt at 30 June 2008, $138.9 billion (61.5 percent) was attributed to the banking sector. House prices in New Zealand are amongst the highest in the world in relation to people’s income as a consequence – a bubble waiting to burst.

A similar story could be told for the USA and Europe. The 2008 world recession threatened to collapse this debt balloon. The government spending, including on the Christchurch earthquake rebuild, and the surprising continuance of high dairy prices for a time despite the world recession, kept the economy ticking over and a very partial recovery has happened.Internationally the collapse was averted by printing money and massive credit and 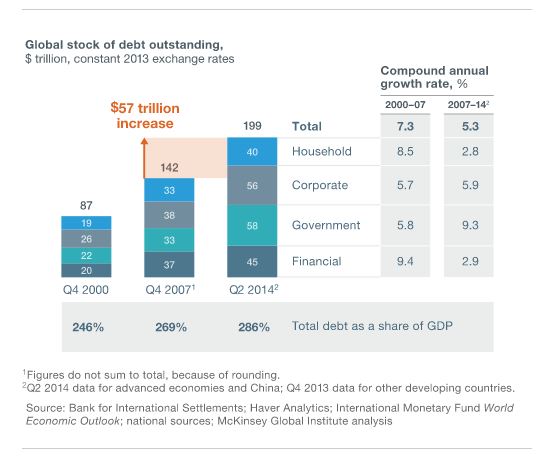 But the existing government debt levels were often already around 100% of GDP and the weakest links were punished mercilessly by the international bond traders to force economic and social policies onto reluctant populations.

Printing money and expanding debt only averts the danger for a time.

Governments like households have to service their debt. This has been helped by exceptionally low interest rates over recent years. But any recovery in the economy will inevitably see interest rates rise. That is what is being signalled by the US Federal Reserve’s decision to raise the official cash rate last month as well as its previous “tightening” measures.

But the consequence of this tightening has been a massive reduction in commodity prices – including milk products which account for a third of New Zealand’s export incomes. Highly indebted dairy farmers are hurting as a consequence. Any significant tightening measures threaten to choke off the recovery. But The US Federal Reserve may not have any choice in that matter as they have to somehow neutralise the printed dollars before they feed into an inflationary collapse of the dollar's value.

This has been avoided to date as the money has essentially been hoarded by the capitalist class. But as soon as they sense the US recovery may get traction they will want to try and use it to get a competitive advantage. Throwing their hoarded trillions into play will lead to an inflationary burst like hasn’t been seen for decades.

But it has been nearly ten years since the beginning of the last world recession. Normally the business cycle is about a decade long. On the usual schedule, we should be heading towards a new downturn rather than a new boom. However, the recovery from the last recession has been so anaemic and slow that it may have prolonged this cycle for the US at least.

Any renewed recession would also be in a period when governments are in a much weaker position to simply print money to spend to overcome it. That was tried. The debt levels are much higher as a consequence. The printed hoards of token currency are still in play. The possibility of a collapse in currency values as a consequence are that much higher.

The normal rules no longer seem to be in play. Economists have started to talk about a period of prolonged economic stagnation rather than a new boom being possible.

There has also been renewed interest in theories of “long waves” in capitalism’s history. This is the view that there are periods of history in capitalism which stretch over some decades where the 10-year business cycle is dominated by the upward swing in the cycle, which are then followed by decades where the cycle is dominated by the downward phases.

The view is growing that we have entered such a period of capitalist history.What the consequences of that may be I will look at in a future blog.

What the consequences of that may be I will look at in a future blog.