Unite is, however, concerned that some existing BK workers will not be able to renew their visas in the next 12 months because of the ban. Unite will be working closely with Immigration New Zealand and other employers they have relationships with to find alternative employment.

"We understand the regulations that govern these bans are being reviewed this year and we will be asking the government to allow migrant workers caught by such bans to have open visas granted to help them get new employment quickly. These types of workers should not suffer exploitation and then be punished for it along with the employer who exploited them.”

“The key factors in this case were the low level of salary, just above the minimum wage, and a failure to accurately record and pay for all hours worked. There are hundreds of thousands of workers at risk of this. Minimum wage laws can easily be broken where salaried or waged workers on low rates do not have accurate records of actual hours worked”

“Even missing paid breaks all week is enough to do it, or being forced to attend 15 minute unpaid meetings each day, or not being paid for cashing up tills at the end of the day. We have seen cases of all of these from large new Zealand companies recently. Salaried staff in particular are often expected to turn up earlier and finish later than their agreed work hours.”

“Employers need to record actual hours of work for all employees. It isn’t just migrant workers and employers - good old kiwi businesses will also be doing it to their kiwi workers.”

“Its time to call it what it is: Wage Theft. It is a huge problem in New Zealand and around the world. In the US it is estimated that wage theft outstrips robbery, car theft, burglary and larceny combined.” 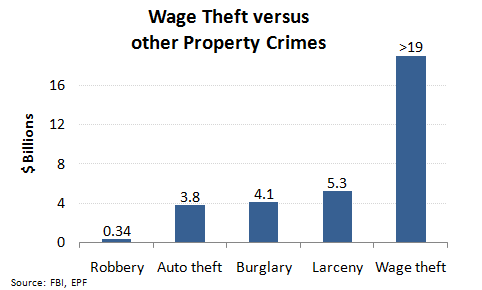 “Our organisers regularly attend disciplinary meetings where workers are sacked and even charged by police with theft for eating a few chips or taking an extra cup of soft drink, but we are yet to see an employer lose their business or be charged, even when they the steal thousands of dollars from their employees wages. Where’s the justice in that?”

“We know workers in New Zealand are owed billions in holiday pay (https://www.radionz.co.nz/news/political/305459/holiday-pay-errors-could-top-$2b) but direct wage theft almost certainly dwarfs this over the same period.”

The good news for Burger King workers is that Unite’s newly settled agreements for both waged and salaried members at Burger King ensure both significant  pay-rises and checks to make sure extra work is recorded and paid.

“We are now very confident that that Burger King will work with us to get the systems in place quickly to make sure all work is paid in full”.