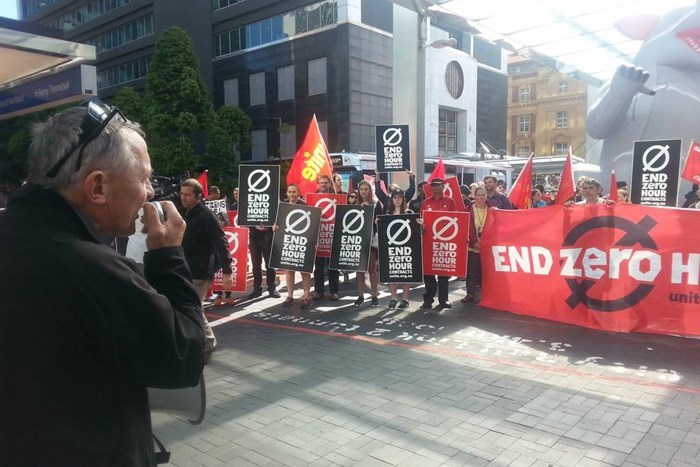 Zero-hour contracts involve an employee being required to show up for work when the employer demands, but the employer isn't obligated to give them any hours. Often the employee is prevented from working for another employer, meaning their income can fluctuate from week-to-week – even down to nothing.

According to the Ministry of Business, Innovation and Employment website, the Employment Standards Legislation Bill states "the employer and the employee do not have to agree on set hours if both prefer flexibility", if the employer agrees to pay some form of compensation to the employee for being available for shifts.

"That is a zero-hours contract," says Mr Treen.

"The new law assumes equality in an employment relationship. Woodhouse knows that is a lie. When a young, unemployed worker turns up at a fast food giant and asks for work they can't negotiate as equals.

"If they are offered a contract with no fixed hours and compensation of a few dollars a week for being available, they will accept it."

The new law could also reduce the amount an employer has to pay to employees whose shifts are cancelled.

"Under the law at present, a worker who is offered a shift and agrees to work must be paid for the shift if it is cancelled or they are sent home early," explains Mr Treen.

"Under the new law, a compensation clause of some nominal amount could be agreed in the contract as an alternative."

Mr Woodhouse has previously declined to specify what a reasonable amount of compensation would be, saying last month "there is a plethora of different scenarios and it is really hard to write a rule for everyone".

Last week he said the new Bill "demonstrates a pragmatic approach to promoting flexibility and fairness in the labour market without imposing unnecessary compliance costs on employers in general".

The Council of Trade Unions has also expressed disappointment in the new Bill, saying a worker could be offered as little as $1 compensation for being on call or if their shift is cancelled – whereas currently, they would at least get minimum wage.

"The minister is trying to put out a fire with petrol," secretary Sam Huggard told the New Zealand Herald.